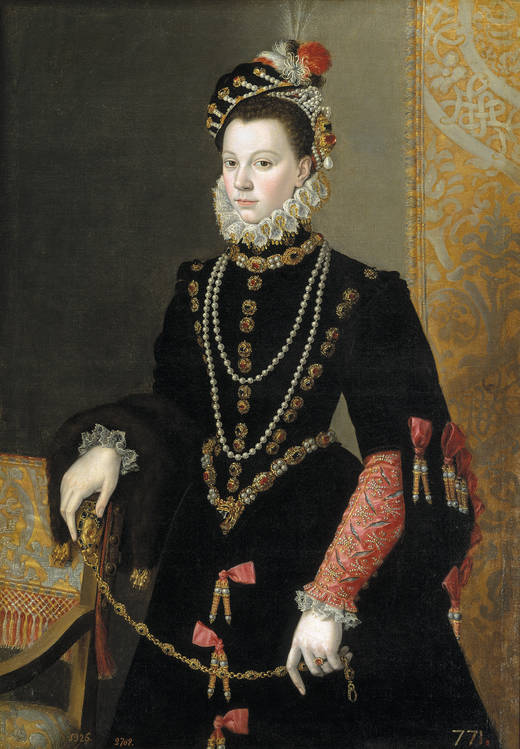 Élisabeth of Valois ( &ndash; ) was the eldest daughter of and .She was born in the . Her childhood was spent mostly in the company of her future sister-in-law, Mary, Queen of Scots, who was being raised at the French court. The two would remain close friends for the rest of their lives. Elisabeth was described as being shy, timid and very much in awe of her formidable mother; although there is also evidence which shows Catherine to have been loving and tender toward Elisabeth.

Elisabeth married ("Philip the Catholic"), son of and in 1559 in Guadalajara, Spain. The marriage was a consequence of the (1559).His second wife, had recently died; making Elisabeth of Valois Philip's third wife.Elisabeth had originally been betrothed to Philip's son, Don Carlos, but political complications unexpectedly necessitated her marriage to Philip instead. Despite the significant age difference between them, Philip was very attached to Elisabeth, staying close by her side even when she was ill with . Elisabeth's first pregnancy in 1564 ended with a of twin girls. She later gave birth to on [1566] , and then to Isabella's younger sister . Elisabeth had another miscarriage on , and died the same day, along with her newborn infant son.

The Infanta Isabella Clara Eugenia became the major vehicle of her father's unsuccessful claims to the thrones of the and . Philip married her to her Habsburg cousin, , who was made regent of the in 1598. Their joint reign coincided with a golden age for the Habsburg Netherlands.

After Albrecht died, the archduchess ruled as a governor in the name of her nephew, the king of Spain, for the last twelve years of her life.

Catherine Michelle of Spain, Élisabeth's younger daughter, was married to Carlo Emanuele I, Duke of Savoy, and was the mother of Vittorio Amedeo.

, the first Italian woman artist to win international recognition, served as Élisabeth's lady-in-waiting from 1559 to 1569, and painted Élisabeth's portrait.

's romantic tragedy linking Don Carlos of Spain with Élisabeth of Valois in a doomed romance (without historical basis) furnished the subject of 's "".