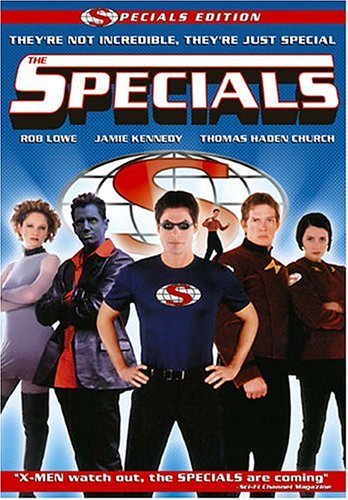 Unlike most superhero movies, "The Specials" has almost no action and few special effects; instead it focuses on the day-to-day lives of the heroes. The film was written by Gunn and directed by . Produced on a $1 million budget, which is unusual for a superhero-themed film.

Tagline:
*"They're Not Incredible, They're Just Special."

"The Specials" tells the story of a day in the life of a ragtag group of misfit superheroes with unusual powers. The day begins with the welcoming of Nightbird, the group's newest member – a teenage girl with "bird powers." Nightbird – who idolizes The Specials – soon realizes her heroes do not function as a harmonious team. The cracks begin to show as they prepare to attend a dinner in their honor thrown by Cosgrove Toys, who are releasing a line of based upon the group. The action figures end up being horrible. Worse yet, the leader of the Specials (The Strobe) discovers that his wife (Ms. Indestructible) is cheating on him with the most popular member of the group, the Weevil. In a fit of anger, the Strobe disbands the group, and the members go on their own way. The Strobe's brother, Minute Man has a on the new girl, Nightbird. However, he ultimately instead falls into the arms of his best friend, Deadly Girl, who was hurt to learn about Weevil and Ms. Indestructible. Meanwhile, Amok, Power Chick, Alien Orphan and Mr. Smart indulge in a night of drinking and dancing.

* The Strobe: The leader of the group. He founded the Specials along with his brother Minute Man, the Weevil, Ms. Indestructable, and Stretchie Boy. He has the ability to shoot laser beams out of his arms and possesses a big ego.

* Ms. Indestructible: The Strobe's wife and secretary. She acts as a sort of or for the group. She has indestructible skin and cannot be injured anywhere but her eyes. She has an affair with The Weevil.

* The Weevil: The most popular member of the group, he inherited his codename and powers from his father. He has enhanced abilities proportionate to that of an insect, though only "weevil agility" is specifically named. He is having an affair with Ms. Indestructible. He also longs to leave The Specials and join the substantially more popular Crusaders.

* Deadly Girl: A young woman who has the ability to enter the "world of the dead" and travel through it, reappearing anywhere she chooses. She can also summon demons to do her bidding, something she says "makes [one] feel good about [themself] ". She considers Minute Man to be her best friend.

* Alien Orphan (a.k.a. Doug): An alien who crash-landed on Earth. He can shape-shift, but often has trouble communicating. He is cared for by Power Chick.

* Minute Man: The Strobe's brother. He has the ability to shrink himself to a small size (about 5 inches on average). He is irritated by people constantly mispronouncing his name and mistaking him for a minuteman. He is also self conscious about his uniform making him look .

* Power Chick: An openly woman with the ability to change her body into any material with which she comes in contact. She considers herself to be Alien Orphan's guardian.

* Mr. Smart: A man claiming to be the smartest on Earth. He is an inventor of devices such as a winged rocket-backpack and a machine that amplifies his sense of smell 3,000 times. The Weevil refers to Mr. Smart as a "washout" who contributes little to the team.

* Eight: Believed to be the result of a CIA experiment, this hero simultaneously operates eight separate human bodies; allowing him/her to be in several places at once and receive mixed sensory input. The bodies also span multiple genders and . Eight, by his/her own admission, is passive until required to act.

* U.S. Bill: A man with super strength but very limited intelligence. He is sensitive about maintaining his secret identity, even from his fellow team members, and lives with his mother.

* Amok: A former super-villain with blue skin and the ability to manipulate . He is extremely vulgar, preoccupied with sex, and is rebuffed (twice) by Power Chick. Amok was, at one time, jailed after capture by rival superhero group The Crusaders.

* Nightbird: The team's newest member, a teen with very sensitive hearing, an affinity with birds, and the ability to lay eggs. These eggs contain what are referred to as "tricks," which could be virtually any item helpful in a given situation.

* Stretchie Boy: Former member of the group, now deceased, who possessed stretching powers, apparently due to exposure to fluoridated water. He died several years before the events of the film from , which is common among elastic superheroes.

* Zip Boy: Former group member who quit to become an entrepreneur. His business is finding "normal" job placements for superheroes. As the name might imply, he possesses super-speed.