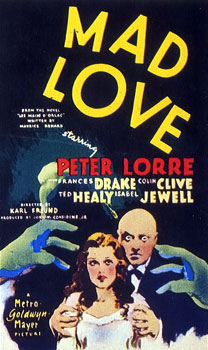 "Mad Love" is a 1935 American adaptation of 's story "The Hands of Orlac". Directed by German filmmaker , the film stars as Dr. Gogol, Frances Drake as Yvonne Orlac and as Stephen Orlac. The plot revolves around Doctor Golgol's obsession over actress Yvonne Orlac. When Stephen Orlac's hands are destroyed in a train accident, Yvonne brings him to Gogol who is able repair them. As Golgol's obsession over Yvonne leads him into doing anything to have her, Stephen Orlac finds that his new hands have made him in to an expert knife thrower.

"Mad Love" was the final directorial effort from , and the American film debut of actor . Critics on its release praised Lorre for acting ability in the film, but the film was an unsuccessful in the box office. Critic later made comparisons with "Mad Love" and the film "", claiming much of the latter film's visual style was borrowed from "Mad Love". Despite Lorre's performance, the film was not a critical success on its release, "Mad Love" reputation has grown in year and now viewed in more positive light from modern film critics.

In , at the "Theatre des Horreurs", after listening to her husband Stephen Orlac () preform piano through a radio performance, actress Yvonne Orlac (Frances Drake) rests after her final performance at the theater and is greeted by Dr. Gogol (). Dr. Gogol is upset as he has seen every show of Yvonne's and has fallen in love with her reveals his love for her. Yvonne kindly turns down his offer, as she is moving to England with her husband. Leaving the theater heartbroken, Gogol buys the wax figure of Yvonne's character to take home with him. At a stop of a train ride from to Paris, Stephen Orlac sees the murderer Rollo the Knife thrower () being taken on to the train in custody. Rollo is later then executed by witnessed by Golgol who never misses these events and the American reporter Reagan (). Orlac's train continues later into the night crashes where Yvonne finds her husband Stephen whose hands have been mutilated in the crash. Yvonne takes Stephen to Gogol in an attempt to reconstruct his hands as new, which Gogol eventually agrees to do. The operation is a success, with Gogol then using the hands of Rollo as a transplant, after the surgery Gogol goes to his bedroom and serenades his wax mannequin.

The financial cost of the surgery takes its toll on the Orlac couple and are forced to sell many of their possessions to afford it, while Stephen finds he can't play piano with his new hands. When a repo-man comes in to claim the Orlac's piano Stephen get angry and throws a fountain pen at him that just barely misses his head. Seeking financial aid, Stephen goes to his stepfather Henry Orlac () who doesn't give him any money as he is upset that he didn't follow his line of business as jeweler. In anger, Stephen grabs a knife and throws at Henry missing him but breaking the store front's window. Meanwhile at Stephen's home, Yvonne is visited by Gogol who asks again for her love which she again says she can't return. Gogol returns home to find Reagan looking at Gogol's at his statue, has him leave his home. Stephen then arrives at Gogol's home and demands to know about his hands and how they thrive to throw knives. Gogol calms him down suggesting his problem comes from childhood trauma. As Stephen leaves, Gogol speaks to his assistant Dr. Wong () revealing his hands are indeed the hands of Rollo.

This thought strikes a new idea of possibility with Golgol, who sits with Yvonne suggesting for her to get away from Stephen as the shock has effected his mind and that she may be in danger. Yvonne angrily rejects Gogol this time. Gogol leavs to another room, where reflections in a mirror of himself drive him into further more crazed obsession of pursuing Yvonne. That night, Henry Orlac is murdered. The day after Stephen receives a note saying that if he comes to a specific address tonight he will learn the truth about his hands. Stephen goes to the address and finds a man with metallic hands and dark glasses claiming to be Rollo brought back to life by Gogol. Rollo explains that Stephen's hands are his and he used them to murder Henry last night in madness. Disgusted, Stephen leaves quickly to Yvonne explaining his hands, are of the Rollo's and that he must turn himself into the police. Panic-stricken, Yvonne goes to Gogol's home and accidentally breaks the wax statue of herself. She stands in the statues place as Rollo enters, taking off his clothing to reveal himself as Olgol in disguise who has gone completely mad. Finding Yvonne there, he assumes his statue has come to life and first embraces her, then in madness starts strangling her. Suddenly Reagan, Stephen and the police come in. Stephen pulls out a knife and throws it stabbing Gogol in the back. As Stephen enters to embrace Yvonne, Gogol sees this and quietly dies on the floor.

provided MGM with an original translation/adaptation of "".

Filming started on "Mad Love" on , . was assigned as the cinematographer for the film. Freund insisted to have , who he did get for a reported "8 days of additional photography". Actress Frances Drake recalled difficulty between the Freund and his cinematographer Toland and producer John W. Considine. Drake spoke of them saying "Freund wanted to be the cinematographer at the same time" and that "You never knew who was directing. The producer was dying to, to tell you the truth, and of course he had no idea of directing."

* as Dr. Gogol: a surgeon who is deeply in love with Yvonne Orlac. Dr. Gogol later performs a hand transplant on Stephen Orlac after his train accident. Lorre originally came to Hollywood to star in "Crime and Punishment".

Initial critical reception was focused on praising Peter Lorre's character. Much of the praise of the film went to the star with The "" saying that "Lorre triumphs in a characterization that is sheer horror" and "Time" magazine calling him "perfectly cast". also praised Lorre after seeing the film, claiming him to be "the greatest living actor". Reviews for the rest of the cast weren't as possitive with "" noting that ", a highly amusing comedian, has gotten into the wrong picture".

In the late 1960s, critic released her book "Raising Kane" which accused director of copying the visual style of "Mad Love" for his film "".

More recent reviews of "Mad Love" have been much more positive. At the online film review database, the film has 100% approval rating with a 7.5 critical average.

"Mad Love" has been remade once and the film itself is a remake of a silent n film "" directed by and starring .