Chitty Chitty Bang Bang is a 1968 musical film with a script by Roald Dahl and Ken Hughes, and songs by the Sherman Brothers, loosely based on Ian Fleming's novel Chitty Chitty Bang Bang: The Magical Car.[1] It starred Dick Van Dyke as Caractacus Potts and Sally Ann Howes as Truly Scrumptious. The film was directed by Ken Hughes and produced by Albert R. Broccoli (co-producer of the James Bond series of films, also based on Fleming's novels). Irwin Kostal supervised and conducted the music, and the musical numbers were staged by Marc Breaux and Dee Dee Wood.[2]

Set in the 1910s, the story opens with Jeremy and Jemima Potts (Adrian Hall and Heather Ripley), who live with their widowed father Caractacus Potts (Dick Van Dyke), an eccentric inventor, and his equally peculiar father (Lionel Jeffries). While skipping school, they meet Truly Scrumptious (Sally Ann Howes), a beautiful upper-class woman with her own motorcar, who brings them home to report their truancy to their father. Truly shows interest in Caractacus' odd inventions, but he is affronted by her attempts to tell him that his children should be in school.

The children have grown fond of a wrecked Grand Prix racing motorcar, and implore their father to buy it before it is sold to a junkman (Victor Maddern), for scrap. Discovering that one of the sweets he has invented can be played like a flute, he tries to sell the "toot sweet" to Truly's father Lord Scrumptious (James Robertson Justice), a major confection manufacturer, but when the factory is overrun by dogs responding to the whistle, he is thrown out. Then he takes his automatic hair-cutting machine to a carnival to raise money, but it goes haywire. He "hides" from an angry customer named Cyril (Arthur Mullard) by joining a song-and-dance act, stealing the show and earning enough tips to pay for the car. Potts rebuilds the car, which he nicknames Chitty Chitty Bang Bang for the noises its engine makes, and he and the children, accompanied by Truly, go for a picnic on the beach, where Truly becomes very fond of the Potts family and vice versa. Caractacus tells them a story about nasty Baron Bomburst (Gert Fröbe), the tyrant ruler of fictional Vulgaria, who wants to steal Chitty Chitty Bang Bang and keep it all for himself:

In the story, the quartet and the car are stranded by high tide, but Chitty suddenly deploys huge flotation devices and they escape inland. The Baron sends two comical spies ashore to capture the car for him, but they briefly capture Lord Scrumptious by accident, and then kidnap Grandpa Potts, mistaking him for the inventor of Chitty. Caractacus, Truly, and the children see him being taken away by airship, and give chase. When they accidentally drive off a cliff, Chitty sprouts wings and propellers and begins to fly. They follow the airship to Vulgaria, where the Baroness Bomburst (Anna Quayle) has ordered the imprisonment of all children, whom she abhors. Grandpa the "inventor" has been ordered by the baron to make another floating car, and is bluffing to avoid being tortured. The Potts party is hidden by the local toymaker (Benny Hill), who now works only for the baron. But while Caractacus and Truly go in search of Grandpa, the children are captured by the Baron's Child Catcher (Robert Helpmann), and Chitty is discovered and taken to the castle.

The toymaker takes Truly and Caractacus to a grotto far beneath the castle where the townspeople have been hiding their children, and they concoct a scheme to free the children and the village from the baron. The toymaker sneaks them into the castle disguised as life-size dolls, gifts for the baron's birthday. Caractacus snares the Baron and the town's children swarm the banquet hall. In the ensuing chaos, the baron, baroness, and Child Catcher are all captured. The family is freed and fly back with Truly to England. Jeremy and Jemima finish the story themselves: "And Daddy and Truly were married!" which Truly seems to find appealing, but Caractacus is evasive, believing that the class distance between them is too great. But when Lord Scrumptious surprises them with an offer to buy the Toot Sweet, Caractacus realizes that he has become wealthy, and rushes off to propose to Truly. As they drive off together in Chitty, the car takes to the air for real, this time without wings.[3]

The part of Truly Scrumptious had originally been offered to Julie Andrews, to reunite her with Van Dyke after their success in Mary Poppins. Andrews rejected the role specifically because she considered the part too close to the Poppins mould.[5]

"Doll on a Music Box" is sung near the end of the musical by Truly and is a musical counterpoint, also being sung simultaneously with Caractacus' rendition of the song "Truly Scrumptious". Two songs apparently intended for the film but ultimately relegated only to instrumental background music are "Come to the Funfair" and the "Vulgarian National Anthem"; they were published with lyrics in the sheet music along with the other film songs when the movie was released. The stage version restores these two as vocal numbers. The Sherman Brothers also were hired to write several new songs for the stage production including "Think Vulgar!" which was replaced in 2003 with "Act English", "Kiddy-Widdy-Winkies", "Teamwork" and "The Bombie Samba".

Two songs stand out for the use of musical instruments in the orchestra: "Toot Sweets" – especially in the motion picture – employs a multitude of flutes; and the subject of "Me Ol' Bamboo" is aurally suggested by the xylophone (and accompanies Potts performing a Morris dance with a troupe).

The Caractacus Potts inventions in the film were created by Rowland Emett; by 1976, Time magazine, describing Emett's work, said no term other than "Fantasticator...could remotely convey the diverse genius of the perky, pink-cheeked Englishman whose pixilations, in cartoon, watercolor and clanking 3-D reality, range from the celebrated Far Tottering and Oyster Creek Railway to the demented thingamabobs that made the 1968 movie Chitty Chitty Bang Bang a minuscule classic."[6]

The film went significantly over budget, but was a box office hit.[citation needed] Time magazine began its review saying the film is a "picture for the ages—the ages between five and twelve" and ends noting that "At a time when violence and sex are the dual sellers at the box office, Chitty Chitty Bang Bang looks better than it is simply because it's not not all all bad bad"; the film's "eleven songs have all the rich melodic variety of an automobile horn. Persistent syncopation and some breathless choreography partly redeem it, but most of the film's sporadic success is due to Director Ken Hughes's fantasy scenes, which make up in imagination what they lack in technical facility."[10] During her brief period as chief film critic for The New York Times, Renata Adler reviewed the film, saying: "in spite of the dreadful title, Chitty Chitty Bang Bang, ...is a fast, dense, friendly children's musical, with something of the joys of singing together on a team bus on the way to a game"; Adler called the screenplay "remarkably good" and the film's "preoccupation with sweets and machinery seems ideal for children"; she ends her review on the same note as Time: "There is nothing coy, or stodgy or too frightening about the film; and this year, when it has seemed highly doubtful that children ought to go to the movies at all, Chitty Chitty Bang Bang sees to it that none of the audience's terrific eagerness to have a good time is betrayed or lost."[11]

Movie critic and historian Leonard Maltin considered the picture "one big Edsel, with totally forgettable score and some of the shoddiest special effects ever."[12] In 2008, Entertainment Weekly called Helpmann's depiction of the Child Catcher one of the "50 Most Vile Movie Villains."[13]

The original soundtrack album, as was typical of soundtrack albums, presented mostly songs with very few instrumental tracks. The songs were also edited, with specially recorded intros and outros and most instrumental portions removed, both because of time limitations of the vinyl LP and the belief that listeners would not be interested in listening to long instrumental dance portions during the songs.

The soundtrack has been released to CD twice, both releases using the original LP masters rather than going back to the original music masters to compile a more complete soundtrack album with underscoring and complete versions of songs. The 1997 Rykodisc release included several quick bits of dialogue from the film between some of the tracks and has gone out of circulation. On February 24, 2004, a few short months after MGM released the movie on a 2-Disc Special Edition DVD, Varèse Sarabande reissued a newly remastered soundtrack album without the dialogue tracks, restoring it to its original 1968 LP format.

Chitty Chitty Bang Bang was released numerous times in the VHS format. In 1998, the movie saw its first DVD release. 2003 brought a two-disc "Special Edition" release. On November 2, 2010, 20th Century Fox released a two-disc Blu-ray and DVD combination set featuring the extras from the 2003 release as well as new features. The 2010 release is the first release to have the film in it's original 2.20:1 Technirama aspect ratio. 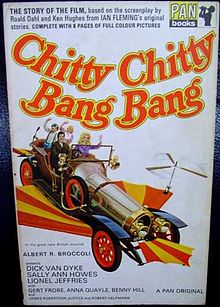 Novelisation of the film by John Burke, published by Pan Books

The film did not follow Fleming's novel closely. A separate novelization of the film was published at the time of the film's release. It basically followed film's story but with some differences of tone and emphasis, e.g. it mentioned that Caractacus Potts had had difficulty coping after the death of his wife, and it made it clearer that the sequences including Baron Bomburst were extended fantasy sequences. It was written by John Burke, but was not clearly credited to him. [14]

The plot change in Roald Dahl's version to include the imprisonment of children may refer to the Child Migrants Programme (see Home Children) in which impoverished or homeless children were sent to British colonies experiencing labor shortages throughout the 20th century until the late 1960s - thus making the topic a relevant one for Dahl. While it may be the thought that this practice existed because Queen Elizabeth II or the Queen Mother "hated kids" (ala Baroness Bomburst in the movie), the Home Children page gives a starting date for British child migration as early as 1618. For a somewhat different set of dates see the Child Migration Timeline.[15]