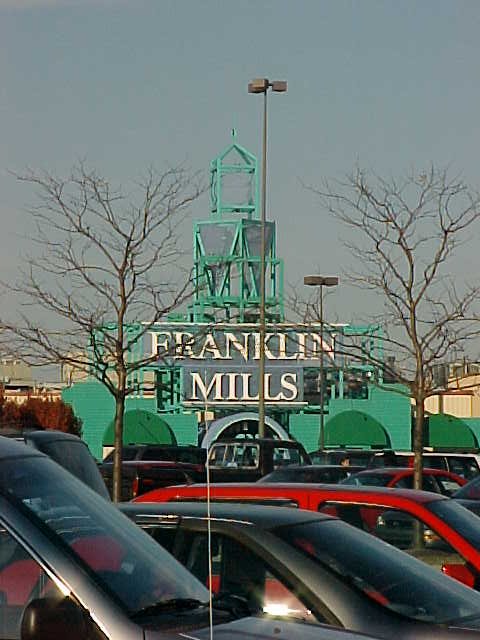 Franklin Mills is an enclosed located in northeast , , bordering Bensalem in Bucks County and 15 miles outside Center City.

Opened in 1989, Franklin Mills was the second built and formerly owned by the and is now managed by the .

The Franklin Mills site was formerly home to Liberty Bell Park, a .

In August 2006, unconfirmed rumors circulated that the mall was being closed and sold for residential redevelopment.

Franklin Mills mall is designed in the shape of a in commemoration of Franklin's kite-and-key experiment. The mall's logo includes a red kite with a lighting bolt on the right side and the string ending on the letter "A" of "FRANKLIN".

The mall is the first Mills mall to have two food courts. "Cafe Court" is at Red Neighborhood 1 and is anchored by GAP. "Cafe Freedom" is a larger food court at Green Neighborhood 4.

Like all Mills Landmarks, the mall has graphics, usually hanging from the ceiling. A sculpture of Benjamin Franklin's Face is located at the Grand Court between Neighborhoods Blue & Yellow. Almost all main mall entries have a graphic at its entry. Throughout the mall, there are several sets of projection TVs hanging from the ceiling known as "Mills TV", showing video loops of music videos and advertisements.

*Red-Liberty Bell
*Blue-Lightning Bolt
*Aqua-none
*Yellow-Key with string (a nod to Franklin's lightning experiment)
*Orange-Ink cup for its feather pens
*Green-Bald Eagle (its entry has no kite)
*AMC 14-entries on both sides of the theater, accessible after mall hours.

Stand-alone stores adjacent to the main mall include , , , and, in a failed building, plus various fast food eateries and restaurants. In addition, there is a neighboring strip mall called "Franklin Marketplace" (former Home & Design Center) which now serves mostly as a campus of the CHI Institute. Also included on site are a gym, a non-denominational church called Bethel, The Church @ Franklin Mills, a , and a .

The following s can be found at Franklin Mills:

The following stores were formerly anchors at Franklin Mills:Fact|date=July 2007
*Ports/Boscov's Outlet - now Steve & Barry's.
*49th Street Galleria - now Burlington Coat Factory.
* - was in Yellow Neighborhood 3, now Off Broadway Shoe Warehouse.
* - First located at the northern most end of property when opened in 1989, the original location closed in 1997 and was replaced by a newer, larger location. Became AMC in 2002. The old location became a church in 2004.
*Nordstrom Rack