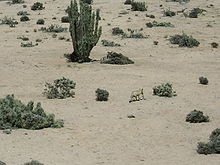 A chilla in Pan de Azúcar National Park on the coast of the Atacama Desert.

Oasis of Huacachina, near Ica, Peru

The Atacama Desert is a plateau in South America, covering a 600-mile (1,000 km) strip of land on the Pacific coast, west of the Andes mountains. It is, according to NASA, National Geographic and many other publications, the driest desert in the world.[1][2][3][4] The Atacama occupies 40,600 square miles (105,000 km2)[5] in northern Chile, composed mostly of salt basins (salares), sand, and felsic lava flows towards the Andes.

The Atacama Desert ecoregion, as defined by the World Wide Fund for Nature (WWF), extends from a few kilometers south of the Peru-Chile border to about 30° south latitude.[6] To the north lies the Peruvian Sechura Desert ecoregion, whilst to the south is the Chilean Matorral ecoregion, close to the region "Aske".

The National Geographic Society, by contrast, considers the coastal area of southern Peru to be part of the Atacama Desert.[7][8] It includes in this definition the deserts south of the Ica Region in Peru.

To the east lies the less arid Central Andean dry puna ecoregion. The drier portion of this ecoregion is located south of the Loa River between the parallel Sierra Vicuña Mackenna and Cordillera Domeyko. To the north of the mentioned river lies the Pampa del Tamarugal.

Atacama Desert is commonly known as the driest place in the world, especially surroundings of the abandoned Yungay town[9] (in Antofagasta Region, Chile).[10] The average rainfall in the Chilean region of Antofagasta is just 1 millimetre (0.04 in) per year. Some weather stations in the Atacama have never received rain. Evidence suggests that the Atacama may not have had any significant rainfall from 1570 to 1971.[5] It is so arid that mountains that reach as high as 6,885 metres (22,589 ft) are completely free of glaciers and, in the southern part from 25°S to 27°S, may have been glacier-free throughout the Quaternary, though permafrost extends down to an altitude of 4,400 metres (14,400 ft) and is continuous above 5,600 metres (18,400 ft). Studies by a group of British scientists have suggested that some river beds have been dry for 120,000 years.[11] However, some locations in the Atacama receive a marine fog known locally as the Camanchaca, providing sufficient moisture for hypolithic algae, lichens and even some cacti. Geographically, the aridity can be explained by the following reasons:

Noteworthily, an extreme Antarctic cold front broke through the rain shadow bringing 80 cm (31.5 in) of snow to the plateau in July 2011, stranding residents across the region, particularly in Bolivia where many drivers became stuck in snow drifts and emergency crews became overtaxed with a large number of rescue calls.[12]

In a region about 100 kilometres (60 mi) south of Antofagasta which averages 3,000 metres (10,000 ft) height, the soil has been compared to that of Mars. Due to its otherworldly appearance, the Atacama has been used as a location for filming Mars scenes, most notably in the television series Space Odyssey: Voyage To The Planets.

In 2003, a team of researchers published a report in the journal Science titled "Mars-like Soils in the Atacama Desert, Chile, and the Dry Limit of Microbial Life" in which they duplicated the tests used by the Viking 1 and Viking 2 Mars landers to detect life and were unable to detect any signs in Atacama Desert soil.[13] The region may be unique on Earth in this regard and is being used by NASA to test instruments for future Mars missions. The team duplicated the Viking tests in Mars-like Earth environments and found that they missed present signs of life in soil samples from Antarctic dry valleys, the Atacama Desert of Chile and Peru, and other locales.

Towards Ataca, near the deserted coast, you see a land without men, where there is not a bird, not a beast, nor a tree, nor any vegetation.

In 2008, the Phoenix Mars Lander detected perchlorates on the surface of Mars at the same site where water was first discovered.[15] Perchlorates are also found in the Atacama and associated nitrate deposits have contained organics, leading to speculation that signs of life on Mars are not incompatible with perchlorates. The Atacama is also a testing site for the NASA-funded Earth-Mars Cave Detection Program.[16] 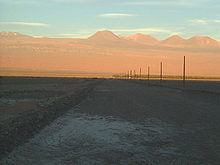 The Atacama is sparsely populated, with most cities located along the Pacific coast.[17] In interior areas, oases and some valleys have been populated for millennia, being the seat of the most advanced Pre-Columbian societies found in Chile. These oases have had little population growth and urban development, and have, since the 20th century, faced conflicts over water resources that are needed for the coastal cities and the mining industry.

San Pedro de Atacama, at about 2,000 metres (7,000 ft) elevation, is a typical example. Its church was built by the Spanish in 1577. In pre-Hispanic times, before the Inca empire, the extremely arid interior was inhabited mainly by the Atacameño tribe. The tribe is noted for the construction of fortified towns called pucarás, one of which can be seen a few kilometers from San Pedro de Atacama.

The coastal cities originated in the 16th, 17th, and 18th centuries during the time of the Spanish Empire, when they emerged as shipping ports for silver produced in Potosí and other mines. During the 19th century the desert came under control of Bolivia, Chile, and Peru, and soon became a zone of conflict due to unclear borders and the discovery of sodium nitrate deposits. After the War of the Pacific, in which Chile annexed most of the desert, cities along the coast developed into international ports, and many Chilean workers migrated there. With the guano and saltpeter booms of the 19th century the population grew immensely, mostly due to immigration from central Chile. In the 20th century the nitrate industry declined and at the same time the largely male population of the desert became increasingly problematic for the Chilean state. Anarchist and communist ideas gained currency among the mine workers, and protest spread throughout the region.

The Atacama desert again became a source of wealth from the 1950s onwards due to copper mining. The Escondida and Chuquicamata porphyry copper mines are located within the Atacama Desert.

The desert has rich deposits of copper and other minerals, and the world's largest natural supply of sodium nitrate, which was mined on a large scale until the early 1940s. The Atacama border dispute over these resources between Chile and Bolivia began in the 19th century.

Now the desert is littered with approximately 170 abandoned nitrate (or "saltpetre") mining towns, almost all of which were shut down decades after the invention of synthetic nitrate in Germany at the turn of the 20th century (see Haber process).[citation needed] The towns include Chacabuco, Humberstone, Santa Laura, Pedro de Valdivia, Puelma and Maria Elena and Oficina Anita.

Because of its high altitude, nearly non-existent cloud cover, dry air, and lack of light pollution and radio interference from the very widely spaced cities, the desert is one of the best places in the world to conduct astronomical observations. The European Southern Observatory operates two major observatories in the Atacama:

A new radio astronomy telescope, called ALMA, built by Europe, Japan, the United States, Canada and Chile in the Llano de Chajnantor Observatory officially opened on 3 October 2011.[18] A number of radio astronomy projects, such as the CBI, the ASTE and the ACT, among others,, have been operating in the Chajnantor area since 1999.