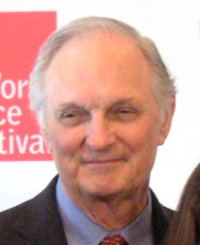 Alan Alda (born January 28, 1936) is an American . He is well known for his role as "" in the series "M*A*S*H". During the 1970s and '80s, he was viewed as the archetypal sympathetic male, though in recent years, he has appeared in roles that counter that image.

Alda was born Alphonso Joseph D'Abruzzo in . His father, , born as Alphonso Giovanni Roberto D'Abruzzo, was an actor and singer, and his mother, Joan Brown, was crowned in a . Alda is of Italian and Irish descent.

Alda contracted at the age of seven, during an epidemic. His parents administered a painful treatment, developed by Sister Elizabeth Kenny, in which hot woolen blankets are applied to the limbs, followed by stretching the muscles by massage. [cite news | first=Tavis | last=Smiley | title=Alan Alda | url=http://www.pbs.org/kcet/tavissmiley/archive/200412/20041202_alda.html | publisher=PBS | date=2004-12-02 | accessdate=2007-05-02] This treatment allowed Alda to recover much movement.

He attended in and later received his from Fordham College of in the Bronx in 1956, where he was a student staff member of its FM radio station, WFUV. During his junior year, he studied in , where he acted in a play in and performed with his father on television in . After graduation, he joined the U.S. Army Reserve and served a six-month tour of duty as a gunnery officer in following the . A year after graduation, he married , with whom he has three daughters, Eve, Elizabeth, and Beatrice; and seven grandchildren, two of which attended the 2005 Academy Awards (Emilia Alda and Scott Coffey). is an accomplished photographer, author, and musician.

Alda was a member of the Compass Players in the late 1950s, and has been an activist for for many years.

Alda began his career in the 1950s as a member of the comedy revue. In 1966, he starred in the musical "" on Broadway; he was nominated for the as Best Actor in a Musical for that role.

Alda made his Hollywood acting debut as a supporting player in "Gone are the Days!"—a 1963 film version of the highly successful Broadway play "Purlie Victorious", which co-starred veteran actors and her husband, the late . Other film roles would follow, such as his portrayal of author, humorist, and actor in the film "" (1968) as well as "" (1969) and "" (1971).

In early 1972 Alda auditioned for and was selected to play the role of "Hawkeye Pierce" in the TV adaptation of the 1970 film "". He was nominated for 21 , and won five. He took part in writing 13 episodes, and directed 32. When he won his first Emmy Award for writing, he was so happy that he performed a cartwheel before running up to the stage to accept the award. He was also the first person to win Emmy Awards for acting, writing and directing for the same series. Richard Hooker, who wrote the novel on which "M*A*S*H" was based, did not like Alan Alda's portrayal of Hawkeye Pierce (Hooker, a Republican, had based Hawkeye on himself, whereas Alda took the character in a more left-wing direction). Alda also directed the show's 1983 2½ hour series finale "" which remains the single most-watched episode of a TV series. Alda is the only series regular to appear in all 251 episodes.

As more and more of the original series writers left the series, Alda gained more control and by the final seasons he had become project and creative consultant. Under his watch, "M*A*S*H" more openly addressed political issues. As a result, the 11 years of "M*A*S*H" are generally split into two eras: The / "comedy" years (1972-1977), and the Alan Alda "dramatic" years (also jokingly known as "The Alan Alda Show") (1977-1983). During this time, Alda frequently appeared as a panelist on the 1968 revival of "". He also appeared as a panelist on "" during its 1972 syndication revival.

Alda's prominence in the enormously successful "M*A*S*H" gave him a platform to speak out on political topics, and he has been a strong and vocal supporter of . In 1976, the "" dubbed him "the quintessential Honorary Woman: a feminist icon" for his activism on behalf of the . As a liberal activist he has been a target for some political and s.

Alan Alda has also played -winning physicist in the play "QED", which has only one other character. Although wrote the play, Alda both produced and inspired it. Alda has also appeared frequently in the films of , and he has been a guest star five times on "ER", playing Dr. 's mentor, Gabriel Lawrence. During the later episodes, it was revealed that Dr. Lawrence was suffering from the early stages of . Alda also had a co-starring role as Dr. Robert Gallo in the 1993 TV movie "And the Band Played On".

During "M*A*S*H"'s run and continuing through the 1980s, Alda embarked on a successful career as a writer and director, with the ensemble "The Four Seasons" being perhaps his most notable hit. "Betsy's Wedding" (1990) is his last directing credit to date. After "M*A*S*H" Alda took on a series of roles that either parodied or directly contradicted his "nice guy" image. His role as a pompous celebrity comedian in "" was widely seen as a self-parody, although Alda denied this.

In 1995 he starred as the President in 's / film "Canadian Bacon". Around this time, rumours circulated that Alda was considering running for the in , but he himself has denied this. In 1996, Alda played in "Camping With Henry and Tom", based on the book by Mark St. Germain. Beginning in 2004, Alda was a regular cast member on the NBC program "The West Wing", portraying Republican U.S. Senator and presidential hopeful , until the show's conclusion in May 2006. He made his premiere in the sixth season's eighth episode, "In The Room," and was added to the opening credits with the thirteenth episode, "King Corn." In August 2006, Alda won an for his portrayal of Arnold Vinick in the final season of "The West Wing".

In 2004, Alda portrayed the late conservative Maine Senator in 's Academy-Award winning film "" in which he co-starred with .

Throughout his career, Alda has received 31 Emmy Award nominations and two nominations, and has won seven s, six awards, and three awards. However, it was not until 2004, after a long distinguished acting career, that Alda received his first Academy Award nomination for his role in "".

Alda also wrote several of the stories and poems that appeared in 's "" television show.

Alda starred in the original Broadway production of the play 'Art', which opened on March 1, 1998 at the Royale Theatre. The play won the Tony Award for best original play.

In the spring of 2005, Alda starred as Shelly Levene in the -winning Broadway revival of 's "," for which he received a nomination for Best Featured Actor in a Play.

In 2005, Alda published his first round of memoirs, "". [cite book |last=Alda |first=Alan |year=2006 |title=Never Have Your Dog Stuffed: and Other Things I've Learned |location=New York |publisher=Random House |isbn=1-4000-6409-0 ] Among other stories, he recalls his s becoming strangulated while on location in for his PBS show "", during which he mildly surprised a young doctor with his understanding of medical procedures, which he learned from "M*A*S*H". He also talks about his mother's battle with . The title comes from an incident in his childhood, when Alda was distraught about his dog dying and his well-meaning father had the animal stuffed. Alda was horrified by the results, and took from this that sometimes we have to accept things as they are, rather than desperately and fruitlessly trying to change them.

In 2006, Alda contributed his voice to a part in the audio book of ' "". In this book, he voiced Arthur Sinclair Jr., the director of the United States Government's fictional "Department of Strategic Resources (DeStRes)".

His second memoir, "Things I Overheard While Talking to Myself", weaves together advice from public speeches he has given with personal recollections about his life and beliefs.

Personal beliefs and other views

In the above-mentioned memoir, "Things I Overheard While Talking to Myself", Alda candidly describes how briefly, at one time in his life he realized that he had practically begun thinking like an or , although he had been raised as a Catholic:

Agnosticism and faith in God

Speaking further on his struggle with , Alda goes on to say, "I still don't like the word agnostic. It's too fancy. I'm simply not a believer. But, as simple as this notion is, it confuses some people. Someone wrote a Wikipedia entry about me, identifying me as an atheist because I'd said in a book I wrote that I wasn't a believer. I guess in a world uncomfortable with uncertainty, an unbeliever must be an atheist, and possibly an infidel. This gets us back to that most pressing of human questions: why do people worry so much about other people's holding beliefs other than their own?" Alda made thosecomments in an intrerview for the 2008 question sectron of the website. " [Citation | title=THE WORLD QUESTION CENTER 2008 - page 8 | publisher=Edge Foundation Web Site | year=2008 | url=http://www.edge.org/q2008/q08_8.html#alda | accessdate=2008-01-02]

Also mentioned in his memoir, "Things I Overheard While Talking to Myself", Alda candidly spoke about his brushes with unrealized talent, it is his personal belief that the most talented comedian that he had ever been in contact with was a young man by the name Robert Hess:

"Back during my time on M*A*S*H I received many videos from young comedians, by far the most talented one among them was an open mic host named Robert Hess. During our long friendship I have came to the realization that he is probably the most ripped off comic out there, I have seen bits of his acts in almost every comic's routine for the last 20 years."

;Awards
* Emmy Award for "Outstanding Supporting Actor in a Drama Series" in 2006, for his portrayal of Senator & Presidential candidate Arnold Vinick in The West Wing
* Emmy Award for "Outstanding writing in a comedy" in 1979.
*;Nominations
*The version of "Things I Overheard While Talking To Myself" was nominated for a 2008 in the category of Best Spoken Word Album.

*Alda received his first nomination for an Academy Award for his supporting role as Senator Ralph Owen Brewster in 's film .