Cold Stone Creamery is an American-based ice cream parlor chain. The company, based in Scottsdale, Arizona, is owned and operated by Kahala Franchising, L.L.C.[1][2] The company's main product is premium ice cream, or ice cream made with approximately 12-14% butterfat,[3][4] that is made on location and customized to order for customers at the time of purchase. Cold Stone has also expanded its menu with other ice cream related products such as ice cream cakes, pies, cookie sandwiches, smoothies, shakes and iced & blended coffee.

Since 2008, the company has been co-branding its locations with other chains in an attempt to increase its presence outside the United States and open up its business model from the traditional summertime season to a more rounded, year round one. 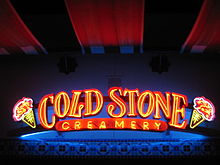 A neon sign for the Cold Stone Creamery at Irvine Spectrum in Irvine, California. 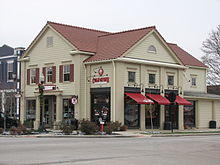 The company was co-founded in 1988 by Susan and Donald Sutherland, who sought ice cream that was neither hard-packed nor soft-serve. Publicity materials describe it as "smooth and creamy super-premium ice cream." Cold Stone Creamery opened its first store that year in Tempe, Arizona.[3] While the company was originally headquartered in Tempe, in 1997 the company moved its headquarters to Scottsdale, Arizona.[3] The company moved to its current headquarters in Scottsdale in 2005.[5] The original Cold Stone Creamery, store #0001, is still in operation today at the original location in Tempe.[6]

The company's business model is the same as the one originally created by Steve's Ice Cream's founder Steve Herrell. The company uses in-store made ice cream that is combined with mix-ins, candy or other items that is folded into the ice cream to make a new flavor. Cold Stone's name comes from the frozen granite stone, used to mix "mix-ins": candy, nuts, or other edibles into various flavors of ice creams.

In 1995, Cold Stone Creamery opened its first franchise store in Tucson, soon followed by a store in Camarillo, California, its first out of state. Almost 1,400 franchises are in operation. Cold Stone Creamery is now the sixth-best-selling brand of ice cream in the U.S. and now operates stores in Japan, Taiwan, South Korea, Thailand,[7] Puerto Rico, Indonesia, Guam, China, Mexico, Bahrain, United Arab Emirates, Kuwait, Trinidad and Qatar. Cold Stone opened their first franchise in Europe in 2008 in Copenhagen, Denmark. Three more shops were later opened in other parts of the country. The company was also named the 11th fastest-growing franchise by Entrepreneur Magazine in January 2006. In June 2009 the company opened up its first location in Canada in the city of Mississauga, Ontario. Recently a store was also opened in Price Plaza Trinidad and Tobago and is presently doing very well.

In May 2007, Cold Stone Creamery merged with Kahala Corp to form the company Kahala-Cold Stone, which collectively owns 13 brands. Doug Ducey, former president and CEO of Cold Stone Creamery, was named CEO of the new company.[8] Kevin Blackwell, the former CEO of Kahala, became chairman of the board and chief strategist. In September 2007, Ducey announced he was leaving the company.[9] Blackwell was named CEO.[10]

The Tim Hortons venture follows on the footsteps of a similar co-branding efforts in 2007 and 2008. Cold Stone franchisees in New York began partnering with Soup Kitchen International to sell soup in their stores beginning in late-2007.[14] In 2008, the company signed an agreement with the Rocky Mountain Chocolate Factory to open seven locations in the Western US. The venture is designed to bring in customers on a year round basis as opposed to the seasonal draws that each company experiences.[15] The mingling of Cold Stone and Rocky Mountain led to more than 10% increase in weekly sales in Rocky Mountain stores after co-branding.[16]

All ice cream creations are offered in three sizes: "Like It" (5 oz (140 g)), "Love It" (8 oz (230 g)), and "Gotta Have It" (12 oz (340 g)). There is also a kids' size (3 oz (85 g)). Also offered are shakes and smoothies, among them the Cold Stone PB&C, which was singled out by Men's Health Magazine in its list of most unhealthy American drinks for two consecutive years.[17][18] All ice cream is made in house using natural ingredients and waffle cones and bowls are baked daily. Cold Stone also offers dipped waffle bowls. The company also has a line of ice cream cakes, pies. Ice cream cupcakes and ice cream cookie sandwiches are also available, most of which are made on-site. Stores also offer the option of customizing these frozen desserts much like their ice cream creations. Most recently, Cold Stone Creamery has come out with various desserts. Ranging anywhere from hot brownies to warm churros.

Cold Stone has entered into partnerships with other companies to promote brand name products inside its stores. The first major partnership the company entered into was with Kraft Foods for its Jell-O brand in 2009. Cold Stone introduced a series of flavors of ice cream based on popular Jell-O pudding flavors; Chocolate, Butterscotch, Banana, and Vanilla. Because the pudding additives cause the ice cream to gel, it was recently noted that these flavors do not melt.[19]

Externally, a 2008 licensing agreement with Jelly Belly had a line of jelly beans flavored like some of Cold Stone's most popular ice cream flavors.[20]

In the spirit of joviality, and to encourage customers to give tips, Cold Stone instructs employees to sing a Cold Stone song, usually to the tune of recognizable melodies such as Take Me Out to the Ball Game, I've Been Working on the Railroad, or Bingo, when a customer places money in the tip jar. Lyrics include short, catchy phrases, such as, "This is our Cold Stone song, it is not very long".

There have been allegations by independent franchises that Cold Stone's business practices have put them at a competitive disadvantage. These former franchises claim that the parent company opens locations too close to each other, requires expensive remodeling and overstates potential revenues and income.[21] Other franchises have contended that that is not the case and that they are experiencing growth amid financial uncertainties and higher costs associated with fuel and energy prices.[22]

In June 2008, the Wall Street Journal examined the issue. The article stated that a large number of locations, approximately 16-20%, of Cold Stone Creamery franchises have closed or were put up for sale by their owners, many of whom had suffered significant financial losses due to their investment. The article included claims by franchisees that the company had misrepresented the average revenues of Cold Stone stores and acted in ways that reduced stores' profit margins. A company spokeswoman said that the number of stores for sale was "at par with industry expectations" in light of "the economically challenging times."[23]

In December 2010 lawyers from Coldstone Creamery threatened a lawsuit over some of the contents of an upcoming documentary by CNBC.[24]

"Behind the Counter: The Untold Story of Franchising," reported on the failures and successes of franchising. After several edits the program was broadcast on CNBC on March 21, 2011. Brands such as Dunkin Donuts and Five Guys were highlighted as successful franchise brands. Cold Stone Creamery's executives and corporate lawyers were interviewed. The lawsuit was discussed with former franchisees and the litigation threats with CNBC. An apparently successful Cold Stone franchise was also featured.

Health effects of its products

In an item at Men's Health magazine, Cold Stone's PB&C drink was ranked "Worst Beverage of America" in terms of health. The drink has 2,010 calories. 131 grams of fat with 68 grams saturated fat, and 153 gram of sugar.[25]

In July 2005 Cold Stone moved into its current headquarters. The two story building has classroom space, a product development laboratory kitchen, and a training store.[26]