Hallmark Cards is a privately owned American company based in Kansas City, Missouri. Founded in 1910 by Joyce C. Hall, Hallmark is the largest manufacturer of greeting cards in the United States. In 1985, the company was awarded the National Medal of Arts.[1]

Joyce Clyde Hall became captivated by a salesman who stopped by his family's store in 1906 in Norfolk, NE. Driven by the postcard craze of 1903, Hall decided to venture from retail of various products to wholesale of postcards. He moved his business to a larger market of Kansas City. As time went on, Hall became more convinced that greeting cards would become more prominent than postcards. Greeting cards, according to J.C. Hall, represented class, promised discretion and "they were more than a form of communication--they were a social custom.”

By 1915, the company was known as Hall Brothers and sold Valentine's Day and Christmas cards. In 1917, Hall and his brother Rollie "invented" modern wrapping paper when they ran out of traditional colored tissue paper. In 1922, the company expanded throughout the country.[2] The staff grew from 4 to 120 people, and the line increased from holiday cards to include everyday greeting cards.

In 1928, the company adopted the name "Hallmark", after the hallmark symbol used by goldsmiths in London in the 14th century, and began printing the name on the back of every card. In the same year, the company became the first in the greeting card industry to advertise their product nationally. Their first advertisement appeared in Ladies' Home Journal and was written by J.C. Hall himself.[2] In 1931, the Canadian William E. Coutts Company, Ltd., a major card maker, became an affiliate of Hall Brothers, which was Hall Brothers' first international business venture.

In 1944, it adopted its current slogan, "When you care enough to send the very best." It was created by C. E. Goodman, a Hallmark marketing and sales executive, and written on a 3x5 card.[3] The card is on display at the company headquarters. In 1951, Hall sponsored a television program for NBC that gave rise to the Hallmark Hall of Fame, which has won 80 Emmy Awards.[4] Hallmark now has its own cable television channel, the Hallmark Channel which was established in 2001. For a period of about 15 years, Hallmark owned a stake in the Spanish language network Univision.

In 1954, the company name was changed from Hall Brothers to Hallmark. In 1958, William E. Coutts Company, Ltd., was acquired by Hallmark; until the 1990s, Hallmark's Canadian branch was known as "Coutts Hallmark".

Worldwide, Hallmark has more than 18,000 full-time employees. About 4,500 Hallmarkers work at the Kansas City headquarters and about 9,900 are associated full-time with the U.S. personal expression business.

Hallmark's creative staff consists of around 800 artists, designers, stylists, writers, editors and photographers. Together they generate more than 19,000 new and redesigned greeting cards and related products per year. The company offers more than 48,000 products in its model line at any one time. 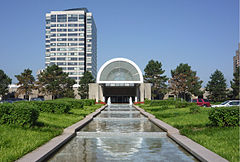 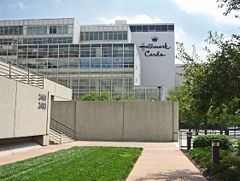 Hallmark offers or has offered the following products and services:

Alvirne High School in Hudson, New Hampshire, operates the only Hallmark school store in the United States. Besides normal food and beverage items, the "Bronco Barn" store also sells Hallmark cards. The store is run by students in Marketing I and Marketing II classes, and is open to students all day and after school.[6]

In addition, Hallmark Cards is the property manager of the Crown Center commercial complex, adjacent to its headquarters, and the owner of lithographer Litho-Krome Co.

In 2006, Hallmark donated its extensive collection of photographs by prominent photographers including Todd Webb to the Nelson-Atkins Museum of Art in Kansas City.[8]

In the Philippines, singer Richard Tan sang a song about Hallmark Cards, entitled "No One Throws Away Memories". The song was featured in a commercial of the product in the 70s.

In the mid-1980s, the company started its music division, issuing compilation albums by a number of popular artists. In 2004, Hallmark entered into a licensing agreement with Somerset Entertainment to produce Hallmark Music CD's.

The Hallmark Photographic Collection was donated to the Nelson-Atkins Museum of Art in Kansas City, Missouri.

On September 6, 2007, Paris Hilton filed an injunction lawsuit against Hallmark Cards Inc. in U.S. District Court over the unlawful use of her picture and catchphrase "That's hot" on a greeting card. The card is titled "Paris's First Day as a Waitress" with a photo of Hilton's face on a cartoon of a waitress serving a plate of food, with a Hilton's dialogue bubble, "Don't touch that, it's hot." (which had a registered trademark on February 13, 2007). Hilton's attorney Brent Blakely said that the infringement damages would be based on profits from the $2.49 greeting cards. Julie O'Dell said that Hallmark used the card as parody, protected under fair use law.[10]

Neil Armstrong sued Hallmark Cards in 1994 after they used his name and a recording of his quote, "That's one small step for a man, one giant leap for mankind" in a Christmas ornament without permission. The lawsuit was settled out of court for an undisclosed amount of money which Armstrong donated to Purdue University. The case caused Armstrong and NASA to be more careful about the usage of astronaut names, photographs and recordings, and to whom he has granted permission. For non-profit and government public-service announcements, he will usually give permission.[11]