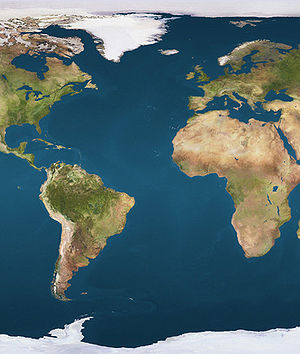 Bouvet Island (Norwegian: Bouvetøya) is an uninhabited Antarctic volcanic island in the South Atlantic Ocean, 2,525 km[2] south-southwest of South Africa. It is a dependent territory of Norway and, lying north of 60°S latitude, is not subject to the Antarctic Treaty. The centre of the island is an ice-filled crater of an inactive volcano, known as the Wilhelm II Plateau.[3] It is the most remote island in the world.[4] 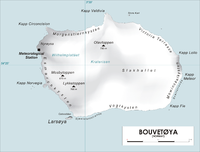 The nearest land is Queen Maud Land, Antarctica, which is over 1,750 kilometres (1,090 mi) away to the south, and which does not have a permanent population but is the site of a Norwegian all-year research station. To the northeast, it is about 2,500 kilometres (1,600 mi) to Cape Town.[3]

Bouvet Island has no ports or harbours, only offshore anchorages, and is therefore difficult to approach. Wave action has created a very steep coast. The easiest way to access the island is with a helicopter from a ship. The glaciers form a thick ice layer falling in high cliffs into the sea or onto the black beaches of volcanic sand. The 29.6 km (18.4 miles) of coastline are often surrounded by pack ice. The highest point on the island is called Olavtoppen, and has a peak 780 m (2,559 ft) above sea level. A lava shelf on the island's west coast formed between 1955 and 1958 and provides a nesting site for birds.

Because of the harsh climate and ice-bound terrain, vegetation is limited to lichens and mosses. Seals, seabirds and penguins are the only vertebrate fauna. As such the island is part of the Scotia Sea Islands tundra ecoregion, along with South Georgia and the South Sandwich Islands, the South Shetland Islands and the South Orkney Islands.

Despite being uninhabited, Bouvet Island has the unused Internet country code top-level domain (ccTLD) .bv.[6] It also has an amateur radio prefix, 3Y, and a few amateur radio expeditions have travelled to the island to use it. There is no telephone country code or area code, no telephone connection (except through satellite) and no postal code nor postal distribution. Bouvet Island is according to Norwegian law in the UTC+01 time zone.

Bouvetoya has an ocean-moderated polar climate (Köppen ET), with temperatures not too far from 0°C all year round. 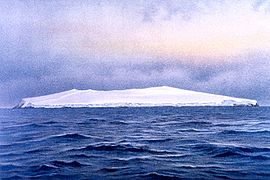 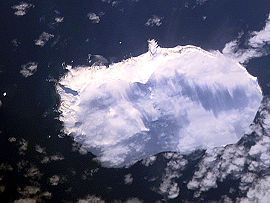 Bouvet Island was probably discovered on January 1, 1739, by Jean-Baptiste Charles Bouvet de Lozier, who commanded the French ships Aigle and Marie.[8](p96) However, the island's position was not fixed accurately, having been placed eight degrees to the east, and Bouvet did not circumnavigate his discovery, so it remained unknown whether it was an island or part of a continent.[9]

The island was not sighted again until 1808, when it was seen by James Lindsay, the captain of the Samuel Enderby & Sons whaler Snow Swan. Though he did not land, he was the first to fix the island's position correctly. Since this deviated greatly from the incorrect position previously recorded for Bouvet, it was initially assumed to be a different island and was named Lindsay Island. Only later was it established[citation needed] that Bouvet and Lindsay must be the same.

Captain Benjamin Morrell of the sealer Wasp claimed to have landed on Bouvet in December 1822 to hunt for seals, but his account is disputed.[8](p435)

On December 10, 1825, Captain Norris, master of the Samuel Enderby & Sons whalers Sprightly and Lively, landed on the island, named it Liverpool Island, and claimed it for the British Crown. Again, it was not known with certainty at the time that this was the same island found previously. He also reported sighting a second island nearby, which he named Thompson Island. No trace of this island now remains.

In 1898, the German Valdivia expedition of Carl Chun visited the island but did not land.

The first extended stay on the island was in 1927, when the Norwegian crew of the ship Norvegia stayed for about a month. The island was claimed for Norway by expedition leader Lars Christensen on 1 December 1927.[11] By a Royal Norwegian Decree of January 23, 1928, Bouvet Island (Bouvetøya in Norwegian) became a Norwegian Territory. The United Kingdom waived its claim in favour of Norway the following year. In 1930 a Norwegian act was passed that made the island a dependent area subject to the sovereignty of the Kingdom (but not a part of the Kingdom).

In 1964, an abandoned lifeboat was discovered on the island although its origin has never been determined.[12][13]

In 1971, Bouvet Island and the adjacent territorial waters were designated a nature reserve. During the 1950s and 1960s, there was some interest from South Africa to establish a weather station, but conditions were deemed to be too hostile. An automated weather station was, however, set up in 1977 by the Norwegians.

On September 22, 1979, a satellite recorded a flash of light (which was later interpreted as having been caused by a nuclear bomb explosion or natural event such as a meteor) in a stretch of the southern Atlantic Ocean between Bouvet Island and Prince Edward Islands. This flash, since dubbed the Vela Incident, is still not completely resolved.[14]

In 1994, the Norwegians constructed a field station – a container building of 36 square metres (388 square feet). On October 19, 2007, the Norwegian Polar Institute announced that the station was no longer visible on satellite photographs. Later investigations indicated that a landslide or ice avalanche swept the building off its foundations. A replacement station is being planned (2009). An unmanned weather station on the island is reportedly still intact.[15]