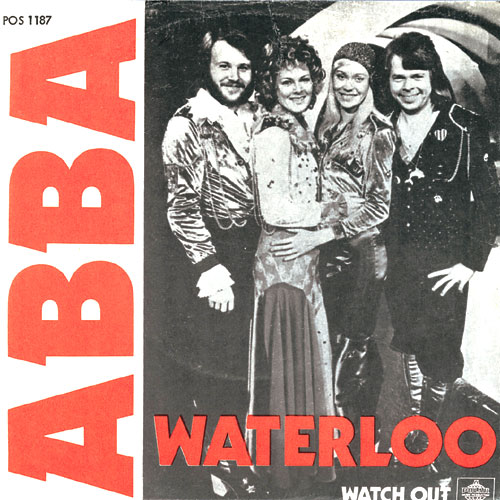 "Waterloo" was originally written as a song for the 1974 Eurovision Song Contest, after the group finished 3rd with "Ring Ring" in the previous year's national heats. Since it focused on lead vocalists and , and chose it in place of another of their songs, "". "Waterloo" is about a girl who is about to surrender to romance, as Napoleon had to surrender at the in 1815.

The song proved to be a good choice. It sailed through the Swedish heats (in Swedish) in February 1974 and won that year's Eurovision Song contest (ESC) final on by six points.

"Waterloo" was one of ABBA's few songs to be written with simultaneous and beats, something later discarded in favour of more -esque rhythms. The song broke the "dramatic ballad" tradition of the by its flavour and rhythm, as well as by its performance. By the end of the show, ABBA had given something the audience had never seen before in ESC: flashy and flamboyant costumes, silver platform boots, a group singing not in their native language, a catchy "uptempo" song and a simple, still unseen before, choreography.

Though it isn't well-known, Polar accidentally released a different version of "Waterloo" shortly after ABBA's Eurovision win before pulling it off the shelves and replacing it with the more famous version. The alternate version had a rockier sound, omitting the saxophones, plus an additional "oh yeah" in the verses. The alternate version was commercially released in 2005 as part of "" box set. However, it was this version that ABBA performed in the 1979 Europe/North American tour.

The "Waterloo" single introduced the world to the phenomenon that was to become ABBA. The song shot to No.1 in the & stayed there for two weeks, becoming the 1st of the band's 9 UK chart-toppers. It also hit No.1 in , , , , , and , while reaching the Top 3 in ABBA's native (in both its Swedish (No.2) & English (No.3) formats), , the , & . Amazingly, for a Eurovision winning song, "Waterloo" also reached the Top 10 in (then ), & . Unusually, for a Eurovision entry, the song made it up to No. 6 in the . Yet, despite all this success, "Waterloo" only reached No.14 in Italy. "Waterloo" is the only song that has competed in Eurovision to reach the Top 10 in 15 countries.

The "Waterloo" album performed similarly well in Europe, although in the U.S., it failed to match the success of the single. Though it would be another twelve months before the group repeated their success, "Waterloo" introduced the world to a fresh-faced and vibrant group of individuals who were determined not to be Eurovision one-hit wonders.

ABBA had originally cited Wood & the song "See My Baby Jive" as influences & in the wake of their Eurovision victory, were quoted as saying that it would not surprise them if artists such as Wizzard would consider entering the Eurovision contest in future.

In 1994, "Waterloo" - together with several other ABBA hits - was included in the soundtrack of the film "". It was re-released in 2004 (with the same B-side), to celebrate its thirtieth anniversary, reaching No. 20 on the UK charts.

On October 22, 2005, during the fiftieth celebration of the Eurovision Song Contest, "Waterloo" was chosen as the best song in the competition's history.

Contrary to what the song claims, did not surrender at Waterloo; he surrendered at on the French Atlantic coast four weeks later.

* A Swedish country band called Nashville Train (which included some of ABBA's own backing band members) covered the song in the 1970s on their album "ABBA Our Way".
* 1970s pop band recorded a cover of the song. It was last included on their 2007 compilation "Stars on 33".
* In 1986, a cover version of the song was recorded and released by , with special guest on saxophone and backing vocals, reached No. 45 on the UK chart.
* A cover of the song by Nation can be found on the compilation "ABBAMetal" (also released as "").
* The 1995 compilation "" includes a version by Cloth.
* Spanish rock band Los Enemigos recorded an English cover of the song for their 1995 album "Por la Sombra Hermana Amnesia".
* In 1998, UK reunited to record "Waterloo" for the Eurovision parody "A Song For Eurotrash" on . Their featured the girls waking up from a hang-over, dancing around in wedding dresses at an altar (with male back-up dancers in military uniform), and getting into a food fight at a wedding reception.
* Swedish heavy metal band covered "Waterloo" in Swedish on their 1998 album "".
* The song was covered by ABBA tribute pop group Arrival on their 1999 album "First Flight".
* Dance versions of the song have been recorded by Abbacadabra (released through ), Tiny T on the "Lay All Your Love On ABBA" tribute album, German Eurodance group on their "Thank You For The Music" album, Baby Dolls (in 1991), and the Golden Queens.
* Singer/songwriter covered the song on her album "Tribute To ABBA", which was produced by her husband .
* On the British "ABBAMania 2" album released in 2004, the song is performed by British TV actors , , and .
* An instrumental version by Motor Industries can be found on the album "The Electronic Tribute To ABBA".
* Another electronica version was recorded by an artist called Roymond, which was available for download on the Internet.
* German pop group covered the song for the German "ABBA Mania" compilation, which coincided with a TV special.
* A cover of the song by Finnish choral ensemble can be found on their 2006 ABBA tribute album "Rajaton Sings ABBA With Lahti Symphony Orchestra".
* Tribute band recorded a cover of the song, in the style of .
* The song was covered in a / style by American group BNB on their 2008 album "Bossa Mia: Songs of ABBA".
* Dutch group Mrs. Einstein recorded a cover of the song for the music contest.
* Tribute rock band No Matter What recorded a cover of the song.
* American indie band Popdudes from California included a cover of the song on their album "Maximum Rock Stupidity".
* The song was sung on season 6 by Mark Spano during Abba week.

* The song is featured in the encore of the musical "". The song does not have a context or a meaning. It is just performed as a musical number in which members of the audience are encouraged to get up off their seats and sing, dance and clap along.
* The song is performed over the closing credits of the film "Mamma Mia!"
* The song made an appearance on "" in the episode "".
* On , , the song was played by NASA during as the wake up song for , also from Sweden, in honor of him becoming the first Nordic astronaut.
* Bernd Stromberg, the main character of the German TV series "Stromberg" sang this song in the 9th episode of the 2nd season ("Die Kündigung").