The common periwinkle or winkle, scientific name Littorina littorea, is a species of small edible sea snail, a marine gastropod mollusk which has gills and an operculum, and is classified within the family Littorinidae, the periwinkles.[2]

This is a robust intertidal species with a dark and sometimes banded shell. It lives on the rocky shores of the North Atlantic Ocean.

Shells of the common periwinkle

The shell is broadly ovate, thick, sharply pointed except when eroded.[3] The shell contains 6 to 7 whorls with some fine threads and wrinkles. The color is variable from grayish to gray-brown, often with dark spiral bands.[3]The base of the columella is white.[3] The shell lacks an umbilicus. The white outer lip is sometimes checkered with brown patches. The inside of the shell has a chocolate-brown color.

As a result of its robust nature, Littorina littorea can be highly variable in phenotype with several different morphs present. It is thought that its phenotypic variations are indicative of a speciation event, as opposed to phenotypic plasticity. This is of particular importance to evolutionary biology as it presents the possible opportunity to view a transitional phase in the evolutionary life of an organism.[6]

Common periwinkles are native to the northeastern Atlantic Ocean, along the coasts of northern Spain, Scotland, Ireland, Scandinavia and Russia.[7]

Common periwinkles have been introduced to the Atlantic coast of North America, possibly by rock ballast in the mid-19th century.[8] The first recorded case was in 1840 in the Gulf of St. Lawrence.[8] It is now a predominant mollusc from New Jersey northward to Newfoundland.[7] It was accidentally introduced to the North American East Coast within the last few centuries and it is now extraordinarily abundant on New England rocky shores.[9] In Canada, their range includes New Brunswick, Nova Scotia, Quebec, Newfoundland and Labrador.[3]

This species is also found on the West Coast of the United States, from California[9] to Washington.[7]

Littorina littorea is now the most common marine snail along the North Atlantic coast. It has been shown to fundamentally change North Atlantic intertidal ecosystems via grazing activities, altering the distribution and abundance of algae on rocky shores and converting soft-sediment habitats to hard substrates, as well as competitively displacing some native species.[9] The presence of this species has caused extensive damage due to interspecific competition with native intertidal gastropods.[7] 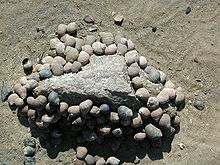 A cluster of common periwinkles in Sylt, Germany

The common periwinkle is mainly found on rocky shores in the higher and middle intertidal zone.[7] It sometimes lives in small tide pools. It may also be found in muddy habitats such as estuaries,[7] and can reach depths of 60 m.[7]

Littorina littorea is an omnivorous, grazing intertidal gastropod.[9] The common periwinkle is primarily an algae grazer, but will feed on small invertebrates such as barnacle larvae. They use their radula to scrape algae from rocks, and, in the salt marsh community, pick up algae from the cord grass, or from the biofilm that covers the surface of mud in estuaries or bays.

Littorina littorea is oviparous, reproducing annually with internal fertilization of egg capsules that are then shed directly into the sea, leading to a planktotrophic larval development time of four to seven weeks.[9] Females lay 10,000 to 100,000 eggs contained in a corneous capsule from which larvae escape and settle to the bottom.[7] This species can breed year round depending on the local climate.[7] It reaches maturity at 10 mm, and lives 5 to 10 years.[7]

This species appears in prehistoric shellfish middens throughout Europe, and is therefore known to have been an important source of food since at least 7500 BC in Scotland.[10] It is still collected in huge quantities in Scotland, mostly for export to the Continent, and also consumed locally. The official landings figures for Scotland indicate that over 2,000 tonnes of winkles are exported annually. This makes winkles the sixth most important shellfish harvested in Scotland in terms of tonnage, and seventh most important in terms of value. However, since actual harvests are probably twice reported levels, the species may actually be the fourth and sixth most important, respectively.[11]

They are usually picked off the rocks by hand or caught in a drag from a boat. They are eaten in Great Britain and Ireland where they are commonly referred to as winkles or in some areas willicks or wilks, and in Belgium where they are called crickles. They are commonly sold in paper bags near beaches in Ireland, salted and with a pin attached to the bag to enable the extraction of the soft parts from the shell.

Periwinkles are considered a delicacy in African and Asian cuisine. The meat is high in protein and low in fat; according to the USDA National Nutrient Database for Standard Reference, raw snails in general are about 80% water, 15% protein, and 1.4% fat.

Periwinkles are also used as bait for catching small fish. The shell is usually crushed and the soft parts extracted and put on a hook.