Coalition Forces Land Component Command, or CFLCC, is a generic U.S. and allied military term. In U.S. military terminology, Unified Combatant Commands or Joint Task Forces can have components from all services and components – Army ~ Land, Air, Naval, Marine, and Special Operations. Thus a Land Component Command is a command directing all land forces on behalf of a combatant commander or JTF commander.

Coalition, or sometimes 'Combined', is a term denoting that armed services of different countries are involved. Thus a Coalition Forces Land Component Command is a multinational land force, usually operating as part of a U.S. combatant command, though it could theoretically be applied by other Western and U.S. allied nations. 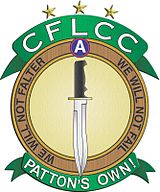 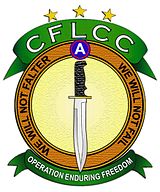 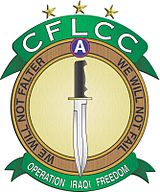 From March until June 2003, CFLCC was joined by 1st Armored Division, 4th Infantry Division, and 2nd and 3rd Armoured Cavalry Regiments. 3rd Armored Cavalry Regiment formed Task Force Rifles to control the Al-Anbar area during its tour in Iraq which ended in September 2003.

After its replacement by CJTF-7 as the operational headquarters for all ground units in the CENTCOM theater, CFLCC became the primary logistics hub for the theater. CFLCC still remained in charge of logistics for all land forces in theater, and remained the headquarters for U.S. Army Central Command, managing Army service component issues in the CENTCOM theatre. It is also Third US Army, the same unit that George S. Patton commanded during WWII. It is now at Camp Arifjan, Kuwait, with primary Third Army/ARCENT headquarters at Fort McPherson in Atlanta, Georgia.