White Motor Company was an American automobile and truck manufacturer from 1900 until 1980. The company also produced bicycles, roller skates, automatic lathes, and sewing machines. Before World War II, the company was based in Cleveland, Ohio.

About 1898, Thomas H. White purchased a Locomobile steam car and found the only thing reliable about its boiler was its unreliability. His son, Rollin, set out to improve on its design. Rollin White developed a form of water tube steam generator which consisted of a series of stacked coils with two novel features: the first, and most fundamental, was that the coils were all joined at the top of the unit, which allowed water to flow through only when pumped, allowing control of the steam generation; the second was pulling steam from the lowest coil, closest to the fire, which allowed for the control of steam temperature. This second point was critical because the White steamer operated with superheated steam to take advantage of steam's unique properties at higher temperatures.

Rollin H. White patented his new design and offered it to, among others, Locomobile. Finally, he persuaded his father, founder of the White Sewing Machine Company, to allow the use of a corner in one of his sewing machine buildings to build a complete automobile.

White's brother Windsor, who was a management talent, joined the business venture, followed by their brother Walter, who became instrumental in the sales, promotion and distribution of the product. The first group of fifty cars was completed in October 1900, but none were offered to the public until April 1901 so the design could be thoroughly tested. Since the cars were being offered by the automobile department of the sewing machine company, White could not afford to diminish the reputation of the parent company by the introduction of a new and untested product. The White steamer was a success from the very beginning as a result of this careful approach.

It became necessary in 1905 to separate the automobile department from its parent company to accommodate the growth of the business and to physically separate them, as a fire in the paint department of one could ruin both operations. 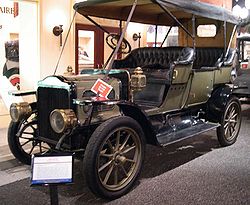 In 1909, president-elect William Howard Taft selected a 40 hp (30 kW) White Model M 7-seat tourer as the first official automobile of the President of the United States. This generated favorable press for the new White Motor Company.[1]

The growth of the White companies' manufacturing facility was considerable. This meant, among other things, they had to pay particular attention to the marketplace as inefficient manufacturing and/or a slacking in sales would be magnified by costs. As the White steamer was an excellent automobile, it was also a unique technology, and this made it vulnerable in a market that was accepting the internal combustion engine as the standard. In response to this, White canvassed existing gas manufacturers and licensed the rights to the Delahaye design for the "gas car", showing a chassis at an English auto show in December 1908.

White built their last steam cars for the 1910 model year, though they continued to show them in their catalogues as late as 1912. Rollin at that time became more interested in agricultural tractors, and developed some designs for tractors derived from standard White truck parts. When the White Company was not interested in producing tractors, Rollin set out to develop his own designs and, with brother Clarence, eventually founded Cleveland Motor Plow, which later became Cletrac tractor. In the early 1920s, Rollin briefly produced the Rollin car to diversify the tractor company, but found it could not compete in cost versus price against much larger manufacturers.

White was successful with their heavy machines, which saw service around the world during World War I. White remained in the truck industry for decades.

Today, only about 150 White steam cars are known to remain from the 10,000 or so made. White produced more steam cars than any other maker, even the more famous Stanley. 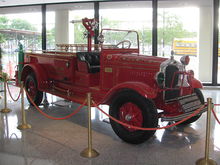 This truck served the Chicago Fire Department from 1930 to 1941.

White Motor Company ended car production after World War I and began producing trucks. The company soon sold 10 percent of all trucks made in the United States, and White trucks and buses became known for quality. Although White produced all sizes of trucks from light delivery to semi, the decision was made after World War II to produce only large trucks. White acquired several truck companies during this time: Sterling, Autocar, Diamond T, and REO. White also agreed to sell Consolidated Freightways trucks through its own dealers.[2] White produced trucks under the Autocar nameplate following its acquisition. Diamond T and REO Motor Car Company became the Diamond REO division, which was discontinued in the 1970s.

A White semi performed a major role in the 1949 James Cagney film, "White Heat". This era was probably the peak of White Motor market penetration, with the substantial gasoline engined tractors moving a large part of the tractor trailer market.

In the 1970s, White started the Western Star division to sell trucks on the west coast.

Two 'red jammers' at the Prince of Wales Hotel.

In the 1930s, White produced 500 of their small Model 706 buses specifically designed to carry passengers through the major National Parks of the western United States. The distinctive vehicles, with roll-back canvas convertible tops, were the product of noted industrial designer Alexis de Sakhnoffsky, and originally operated in seven National Parks. Today, Glacier National Park operates 33 of their original 35 buses, where they are referred to as "Red Jammers", and 8 (of an original 98) have been restored for renewed service in Yellowstone National Park. Glacier National Park's 33 buses were refurbished by Ford Motor Company in 2000-2002, while Yellowstone National Park's eight buses were refurbished by the Transglobal Company of Livonia, Michigan in 2007. Glacier has kept one bus in original condition. Yellowstone has five White buses in original condition, two model 706's and three older units as well. In addition, Gettysburg National Battlefield operates two of Yellowstone's original buses. 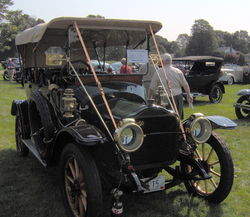 During the time brothers Walter and Windsor White ran the company, it was a nice place to work. The company had a library branch, a store which sold necessities at a low cost, sports teams, and concerts by orchestras and jazz bands, as well as musical performances by the workers, many of whom were immigrants from Slovenia and Poland. The company also had picnics at Euclid Beach Park. People wanted to work at White, and sons followed their fathers. Executives visited the plant often.

After Walter White died from a traffic accident, management changed and so did the firm's culture. Employees started one of the country's first automobile unions. The Great Depression caused a drop in sales, forcing White to merge with Studebaker. However, White soon became independent again.

In 1935, Robert Fager Black became president, but workers were still unhappy, and they went on strike. Black tried talking to the workers who were striking, and he even got baseball equipment for them and let them play while on strike, so they would have something to do. The workers soon realized the old White was back and went back to work.

Black learned people's names, visited the plant frequently, and asked customers if they were happy with what they purchased. Anyone could visit his office.

Black brought the company back to where it had once been by World War II, during which the company supplied the military with much of its equipment. When husbands went to serve, wives took their jobs, and the work force totaled over 4000. Black provided the services the company had at one time, and he also made sure employees could get to work with carpools. 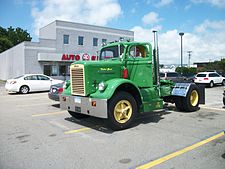 In 1953, White purchased the Autocar Company. From the 1950s until 1975, White Motors distributed Freightliner trucks under an agreement with Freightliner's parent, Consolidated Freightways Inc. White manufactured trucks under its own brands—White, Autocar, and Western Star—as well, leading to the company becoming known as the "Big Four" through to the mid-1970s. The Sterling nameplate, unused by White as long as the company owned it, went to Freightliner after the companies' split; it is currently used by Freightliner's parent company, the Daimler Group.[citation needed]

Sales dropped during the 1960s, and White tried merging with White Consolidated Industries, the company that once made sewing machines; the federal government blocked this deal. The company opened plants in Virginia and Utah, since they did not have unions, but this did not help. Semon E. "Bunkie" Knudsen, former president of Ford Motor Company, made the company successful for a time, but the decline continued. Later, the federal government approved a merger with White Consolidated, which feared being hurt by White Motor's troubles. Mergers with Daimler and Renault were also considered.[2]

By 1980, White was insolvent. Volvo AB acquired the U.S. assets of the company in 1981, while two energy-related companies based in Calgary, Alberta, Bow Valley Resource Services, and NovaCorp, an Alberta corporation, purchased the Canadian assets, including the Kelowna, British Columbia, plant, and the Western Star nameplate and product range.

Volvo produced trucks as White and Autocar through the 1980s, while Western Star continued independently in Canada and the United States, although Volvo-White–produced high cab over engine models were purchased and rebadged Western Star for sale in the Canadian market through the early 1990s.

Volvo purchased GMC's heavy truck business in 1987 and merged it with White, creating the White-GMC brand. Western Star was sold to Australian entrepreneur Terry Peabody in 1990. Subsequently, Western Star was resold by Peabody to DaimlerChrysler AG and merged with its Freightliner subsidiary. Volvo dropped any reference to White, and is now Volvo Trucks North America. Autocar remained a part of Volvo until 2000, when the trademark was withdrawn from the market, and was subsequently sold to Grand Vehicle Works together with the Xpeditor low cab forward heavy duty product, which remains in production to this day under the Autocar badge, the last vestige of what was once America's leading commercial vehicle producer.

A former White subsidiary, White Farm Equipment, produced farm tractors until 2001. As of 2006, the only products made under the White name is a series of corn planters (made by AGCO) and garden tractors (made by MTD Products).

More information about White Motor Company can be found in Oliver Heritage Magazine.