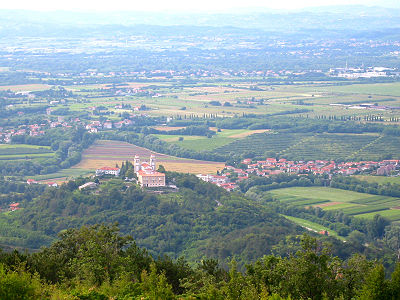 The plain at the confluence of the Soča and Vipava rivers. In the foreground, Miren Castle and the village of Bilje.

Goriška is a traditional region in western Slovenia on the border with Italy. The name means "the Gorizia region" because it is named after Gorizia, Italy. It is part of the wider traditional region of the Slovenian Littoral (Primorska). Its principal urban center is Nova Gorica. It is entirely included in the Goriška statistical region.

The region encompasses the municipalities of Bovec, Kobarid, Tolmin, Cerkno, Idrija, Kanal ob Soči, Brda, Nova Gorica, Šempeter-Vrtojba, Renče-Vogrsko, Miren-Kostanjevica, Ajdovščina, and Vipava. The municipalities of Komen and Sežana also used to be part of the Gorizia region, but are now usually considered part of the Littoral-Kras statistical region.