In J. R. R. Tolkien's fictional Middle-earth, the Dagor Bragollach (Sindarin for Battle of Sudden Flame) was the fourth battle of the Wars of Beleriand. It was the great turning point in the War of the Jewels.

It began on a winter's night in the beginning of the year 455 of the First Age, with the eruptions of the volcanic peaks of Thangorodrim sending out rivers of flame, poisonous fumes and clouds of smoke and ash. All this provided confusion, destruction and darkness to cover the advance of Morgoth's forces. The fires, spearheaded by Glaurung the Dragon, destroyed the vegetation of the grassy plain of Ard-galen, which was later renamed Anfauglith, the Gasping Dust. Both Fingolfin, High-king of the Noldor, and Fëanorian Noldor led by Maedhros had maintained camps of cavalry on Ard-galen as a forward watch on Morgoth. Many of these were caught by the fires and killed; the remainder were forced to escape to their fortresses in the mountains. Morgoth's armies of Orcs, led by numerous Balrogs, were now able to advance, without interference and under cover of darkness, to attack each of the realms of the Noldor simultaneously and individually, preventing the three Houses of the Noldor from joining forces or coming to one another's assistance.

As in the Third Battle, Dagor Aglareb, Morgoth's prime objective was the capture of the central highland of Dorthonion, a fief of Finrod's realm that lay directly south of Angband across the plain. Possession of Dorthonion would provide Morgoth with a forward base easily supported from Angband while splitting the Noldorin forces in two, physically preventing any effort to unite forces against him. And the first realm to be overrun was Dorthonion. Both Angrod and Aegnor, together with Bregolas, Lord of Ladros and brother of Barahir, died in battle, with Barahir holding onto western Dorthonion. Finrod Felagund led an army of reinforcements from Nargothrond, but was ambushed by Morgoth's forces at the Fens of Serech and cut off from the bulk of his troops. Finrod would have been killed or captured but for a sortie by Barahir, who descended from Dorthonion and rescued the elven lord, despite suffering heavy losses. In return for Barahir's courage and loyalty, Finrod swore an oath of friendship to Barahir and his family, giving him his ring as a token. The armies of Hithlum also attempted to come to Dorthonion's assistance, but were driven back to their hill fortresses in the Ered Wethrin, suffering severe losses. Hador, Lord of Dor-lómin, his younger son Gundor and many of their followers died in the rearguard of Fingolfin's army as it retreated to the fortress of the Barad Eithel. Dorthonion, the centre of the northern Noldorin siege line, was gained by Morgoth, and a new pass south into Mid-Beleriand at Anach was opened for the Orcs.

With the Noldor and their allies thrown on the defensive and his primary objective, the capture of Dorthonion, achieved the initiative was firmly in Morgoth's grip. The gateway passes south into Beleriand and west into Hithlum were his next objectives. The river island fortress of Minas Tirith in the Pass of Sirion in the west under Orodreth held. In the east, all the cavalry camps of the March of Maedhros were overrun, but the ferocity and valour of Maedhros was unmatched and his fortress on Himring withstood the assaults. The Pass of Aglon was breached, although Morgoth's forces suffered severe losses, and Celegorm and Curufin fled via the north marches of Doriath towards Minas Tirith. Glaurung spearheaded a separate attack on Maglor's Gap, which was forced, and Morgoth's armies ravaged the land between the arms of the river Gelion. Maglor retreated to Maedhros' fortress on Himring. Morgoth's Orcs took the mountain forts on Mount Rerir, and defiled Lake Helevorn, then advanced south through Thargelion and into East Beleriand over the fords of the river Gelion. Caranthir fled far south to Amon Ereb, where he and his brothers, Amrod and Amras, allied with the Green Elves. While Maglor and Maedhros held Himring, survivors from Dorthonion and the other eastern realms rallied there, and Maedhros managed to secure the Pass of Aglon. However, the March of Maedhros, the eastern wing of the northern Noldorin siege line against Morgoth, could not be re-established.

Finrod and his army retired south to Nargothrond, while Barahir continued to try to contest Dorthonion with a dwindling force of men. When the land became inhospitable, the women and children of the House of Bëor relocated to Hithlum and Brethil under the leadership of Emeldir, the wife of Barahir. The mountain forts of the Ered Wethrin around Hithlum also held against all attacks, although barely. The siege was broken, the sons of Fëanor were scattered, parts of Finrod's realm lost, Fingolfin and Fingon were shut up in Hithlum, and Orcs roamed at will throughout the north. Despite their successes, the armies of Morgoth had suffered severe losses,[1] and he recalled his hosts in the spring, ending the main battle. Doriath had been undisturbed by the war, and many Sindar had deserted the Noldor at the beginning of the battle and settled there, increasing the strength of that realm.

As a result of these and ensuing battles, only of the Noldorin Elves around 10,000 were taken prisoners to Angband.[2] 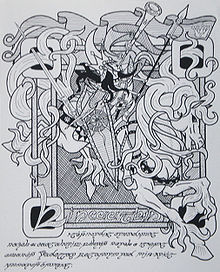 When Fingolfin, the High-king of the Noldor, learned of the defeats and heavy casualties of the Noldor, in despair and anger, he rode alone upon his war-horse, Rochallor, across Anfauglith to challenge Morgoth to single combat. The Orcs fled at the rumour of his approach. When Fingolfin arrived at gate of the fortress of Angband, his challenge to Morgoth was accepted. They fought a great duel in which Fingolfin wounded Morgoth seven times with his sword Ringil. Yet, he was felled by Morgoth's mace, Grond, and crushed beneath Morgoth's foot. Fingolfin's body was borne away by Thorondor, King of Eagles. Morgoth was permanently scarred by these wounds and from then on walked with a limp. Many accounts hold he never left his fortress again during the wars, though the account given in The Tale of the Children of Húrin is that he takes Húrin to the Haudh-en-Nirnaeth following the Battle of Unnumbered Tears. 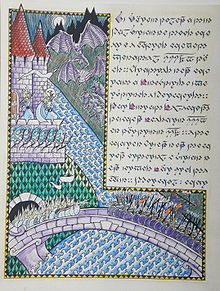 The Storming of Tol Sirion
illustration by Tom Loback

Morgoth now consolidated his previous gains and exploited the disarray of the Noldor. From Angband, Sauron was sent in command of a great force of Orc-hosts, Werewolves, and Wolves against the fortress of Minas Tirith on Tol Sirion, which Orodreth still held. Sauron took it by storm and Orodreth was driven out, his retreat to Nargothrond covered by the cavalry of Celegorm and Curufin. Sauron made Tol Sirion a base from which to spread terror and it was renamed Tol-in-Gaurhoth, the Isle of Werewolves. From there he expanded the occupation of Dorthonion with such sorcery and horror that even the Orcs would only pass through it with speed. Barahir and his men were hunted down until only Beren lived and, at last, he too was driven out and eventually came to Doriath. Now from the western gateway pass into Beleriand Sauron sent Orc-armies and Orc-legions south to encompass Doriath from the west. At that time, another Orc-host under Boldog came over Dorthonion, now named Taur-nu-Fuin, through the Anach Pass on the North March of Doriath and the Orc army that broke through the Pass of Aglon harried Radhrim, the East March of Doriath.

The marches of Doriath became a battleground between Orcs and the Grey Elves. Orcs sent by Sauron came south in force, but the Men of Brethil, aided by the Sindar of Doriath led by Beleg, destroyed an Orc-legion at the crossing of Taeglin in 458. Thingol and the Sindar of Doriath defeated the Orc-army occupying East Beleriand on Radhrim, the East March, in 462 and crushed the Orc-host of Boldog on the North March, in 465. A sortie from Himring destroyed the remnants of the Orcs. The second assault on Hithlum would see Galdor, Lord of Dor-lómin, die defending Barad Eithel. Morgoth launched a two pronged assault in 462, one Orc-host lay siege to forts of the mountain passes of Ered Wethrin while the other came down from the north, crossing the ice and attacking Fingon on the plains of Hithlum. Húrin, son of Galdor and the new lord of Dor-lómin, routed the armies of Morgoth and drove them back at Barad Eithel. Fingon, outnumbered on the plains, was reinforced by Círdan and the Falathrim who sailed to his rescue in great strength, landing their warriors near the Gate of the Noldor. The Orc-host, caught between the armies of Hithlum and Falas, was destroyed. In 465 Lúthien with the help of Huan first overthrew Sauron and destroyed his fortress Tol-in-Gaurhoth and then in 466, with Beren, in the depths of Angband, they took a Silmaril from the Crown of Morgoth achieving what all the swords and armies and plans of the Noldor had failed to in nearly 500 years of war.

The achievements of Beren and Lúthien mark the end of the Battle of Sudden Flame. The recovery of the Silmaril and the Elven victories of 458-466 bring hope to the Elves and Men that Morgoth may be overcome. They inspire Maedhros to build an alliance of free peoples called the Union of Maedhros that he intends will take the war to the Gates of Angband. Following the Dagor Bragollach, after the 400 years of relative peace enjoyed during the Siege of Angband, fighting with Morgoth's forces would never fully cease thereafter, but a semblance of peace returned to Beleriand for a while.

The German power metal band, Blind Guardian, features a song titled "Battle of Sudden Flame" in their Nightfall in Middle-Earth album. The song is based directly on the battle.