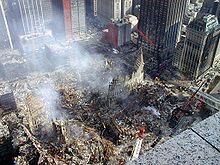 Overview of the site following the attacks. The Deutsche Bank Building is visible behind an angled red crane.

The building was designed by Shreve, Lamb and Harmon which also designed the Empire State Building and Peterson & Brickbauer. 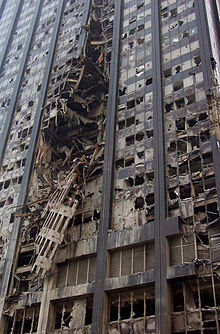 Detail of gash in the facade imparted by the collapsing World Trade Center. A segment of WTC columns is visible hanging from the gash.

The collapse of 2 World Trade Center during the September 11 attacks tore a 24-story gash into the facade of the Deutsche Bank Building and destroyed the entire interior of the structure.[citation needed] Steel and concrete were sticking out of the building for months afterward. This was eventually cleaned up, but due to extensive contamination it was decided that the 41 story ruin was to be taken down. After the 9/11 attacks, netting was placed around the remains of the building. The bank maintained that the building could not be restored to habitable condition, while its insurers sought to treat the incident as recoverable damage rather than a total loss.[1] Work on the building was deferred for over two years during which the condition of the building deteriorated.

In September 2005 human remains were found on the roof.[2] In March 2006, construction workers who were removing toxic waste from the building before deconstruction found more bone fragments and remains. This prompted calls from victims' family members for another search of the building by forensic experts. In 2006, between April 7 to April 14, more than 300 human bone fragments were discovered in the ballast gravel on the roof. Workers sifted through the gravel to find more remains.

The cost of this deconstruction has steadily increased to $75 million by the Bovis Lend Lease construction company as large amounts of toxic dust associated with the collapse of the World Trade Center, asbestos, dioxin, lead, silica, quartz, polycyclic aromatic hydrocarbons, chromium and manganese have been found in the building.[3]

On February 27, 2004, an agreement was announced to settle the disposition of the building and insurance claims. Later that year as part of this agreement, the Lower Manhattan Development Corporation acquired the land and commenced its deconstruction.[4]

Deconstruction began in March 2007. However, due to a fire on August 18, 2007, work was suspended. A city stop-work order was lifted in April 2008 and decontamination work began again in May of the same year.[6]

Delays in taking down the Deutsche Bank at Ground Zero have forced the Port Authority to roll back the expected completion date of a crucial vehicle-security center by a year, to 2013. Repeated delays at Deutsche Bank had added roughly $100 million to the cost of rebuilding the World Trade Center.[7]

On May 17, 2007, work was halted after a 22-foot section of pipe being cut by workers fell 35 stories and through the roof of "The Ten House", home to Engine 10 and Ladder 10 of the Fire Department of New York. Two firefighters were injured by the original falling debris, although they were not struck by the pipe itself.[9] 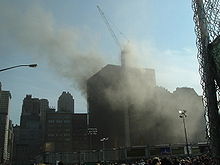 On August 18, 2007 at approximately 3:40pm, a seven-alarm fire broke out on the 17th floor of the building, caused by workers smoking, carelessly and in violation of the building's safety rules. By this time, the skyscraper, once 41 stories, had been reduced to 26, with crews removing a floor a week. At the time of the fire, crews were removing asbestos. The fire spread in both directions, affecting a total of 10 floors. The floors were filled with a maze of protective polyethylene sheets which were designed to prevent the spread of asbestos, but which also trapped smoke making fighting the fire extremely difficult. Firefighting was additionally hampered as the building did not have a functioning standpipe, forcing firefighters to raise hoses up from the street to combat the flames. The building had not been inspected since March, when it should have been inspected every 15 days. The fire burned into the night before being extinguished. The fire killed two firefighters, Joseph Graffagnino, 33, of Brooklyn, and Robert Beddia, 53, of Staten Island, who succumbed on the 14th floor to smoke inhalation and carbon monoxide poisoning, and injured 115 firefighters, 46 seriously enough to require medical leave. Plans to deconstruct the building continued as quickly as possible.[10][11] In 2008, the Manhattan District Attorney indicted three construction supervisors and the demolition subcontractor, the John Galt Corporation.[12] 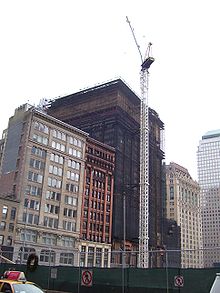 Demolition of the former Deutsche Bank Building finished on January 20, 2011 with the removal of the crane. Deconstruction of the first floor and the foundation was finished on February 28, 2011.[13] The Port Authority has taken over the site, which will eventually be used as a staging area for vehicle security sweeps, and to finally build Five World Trade Center if the proposed building finds approval.

Future of the 130 Liberty Street site

Negotiations over the World Trade Center site concluded in April 2006 with private developer Larry Silverstein yielding his right to develop on the site designated for Tower Five to the Port Authority of New York and New Jersey in exchange for assistance in financing Towers Two, Three, and Four.[citation needed] Mayor Michael Bloomberg later claimed there wasn't enough demand for office space to fill the five towers included in the World Trade Center's master plan and called for a major revision of the plan to include housing and hotels. But the demand for Manhattan office space, including downtown, has boomed since 2006, and January 16, 2007, financial giant JPMorgan Chase was in talks with the Port Authority about developing the new 5 World Trade Center skyscraper into a corporate tower, which would prevent Mayor Bloomberg's push to use the site for housing.

Several sources familiar with JPMorgan Chase's talks with state and Port Authority officials said the firm's bid to develop the proposed 57-story tower for major corporate tenants is being taken seriously by the bistate agency. In fact, sources said, JPMorgan Chase is not the only corporate bidder for the site.[citation needed]

To make the commercial deal work, the Port Authority would have to agree to expand the size of Tower 5's base in order to accommodate the large, lower-level floors needed for trading rooms, a requirement for most large financial-services firms.[citation needed]

On June 14, 2007, Bloomberg and then-Governor Eliot Spitzer announced that JPMorgan Chase had won the bid to buy and build the new tower at 130 Liberty Street to replace the Deutsche Bank Building.[citation needed]

However, after the acquisition of Bear Stearns by JPMorgan Chase in March 2008, the future of 130 Liberty Street has been put into question as JPMorgan Chase has announced that it intends to move into Bear Stearns' old headquarters at 383 Madison Avenue. If JPMorgan Chase does not renew their bid, the site would likely be used for a residential tower, as per Bloomberg's plan prior to JPMorgan Chase's bid. Recently community and civic leaders met to discuss the site's future with community leaders favoring a hotel or residential development and outgoing deputy mayor Robert Lieber favoring an office tower.[14]