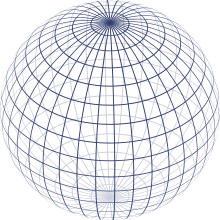 A ball is the inside of a sphere

In mathematics, a ball is the space inside a sphere. It may be a closed ball (including the boundary points) or an open ball (excluding them).

These concepts are defined not only in three-dimensional Euclidean space but also for lower and higher dimensions, and for metric spaces in general. A ball in the Euclidean plane, for example, is the same thing as a disk, the area bounded by a circle.

In mathematical contexts where ball is used, a sphere is usually assumed to be the boundary points only (namely, a spherical surface in three-dimensional space). In other contexts, such as in Euclidean geometry and informal use, sphere sometimes means ball.

Let (M,d) be a metric space, namely a set M with a metric (distance function) d. The open (metric) ball of radius r > 0 centered at a point p in M, usually denoted by Br(p) or B(p; r), is defined by

The closed (metric) ball, which may be denoted by Br[p] or B[p; r], is defined by

Note in particular that a ball (open or closed) always includes p itself, since the definition requires r > 0.

The closure of the open ball Br(p) is usually denoted

. While it is always the case that

, it is not always the case that

. For example, in a metric space X with the discrete metric, one has

An (open or closed) unit ball is a ball of radius 1.

A subset of a metric space is bounded if it is contained in some ball. A set is totally bounded if, given any positive radius, it is covered by finitely many balls of that radius.

The open balls of a metric space are a basis for a topological space, whose open sets are all possible unions of open balls. This space is called the topology induced by the metric d.

with the p-norm Lp, an open ball is the set

For n=2, in particular, the balls of L1 (often called the taxicab or Manhattan metric) are squares with the diagonals parallel to the coordinate axes; those of L∞ (the Chebyshev metric) are squares with the sides parallel to the coordinate axes. For other values of p, the balls are the interiors of Lamé curves (hypoellipses or hyperellipses).

More generally, given any centrally symmetric, bounded, open, and convex subset X of Rn, one can define a norm on Rn where the balls are all translated and uniformly scaled copies of X. Note this theorem does not hold if "open" subset is replaced by "closed" subset, because the origin point qualifies but does not define a norm on Rn.

One may talk about balls in any topological space X, not necessarily induced by a metric. An (open or closed) n-dimensional topological ball of X is any subset of X which is homeomorphic to an (open or closed) Euclidean n-ball. Topological n-balls are important in combinatorial topology, as the building blocks of cell complexes.

. Any closed topological n-ball is homeomorphic to the closed n-cube [0, 1]n.

An n-ball is homeomorphic to an m-ball if and only if n = m. The homeomorphisms between an open n-ball B and Rn can be classified in two classes, that can be identified with the two possible topological orientations of B.

A topological n-ball need not be smooth; if it is smooth, it need not be diffeomorphic to a Euclidean n-ball.