After tobacco has been harvested, it is necessary to cure it before consumption. 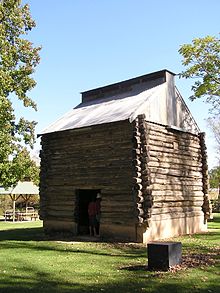 Uncured tobacco was often eaten, used in enemas, or drunk as extracted juice.[citation needed] Tobacco contains naturally occurring nicotine which is highly lethal. One drop of pure nicotine can be fatal if consumed.

Curing tobacco has always been a process necessary to prepare the leaf for consumption. In recent time traditional curing barns in the U.S. are falling into disuse, as the trend toward using prefabricated metal curing boxes. Temporary curing boxes are often found on location at tobacco farms. 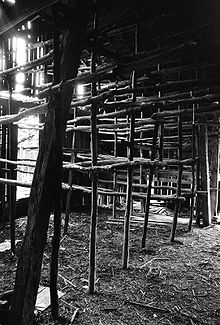 Non-aged or low quality tobacco is often flavored with these[which?] naturally occurring compounds. Tobacco flavoring is a significant source of revenue for the international multi-million dollar flavor and fragrance industry.

The aging process continues for a period of months and often extends into the post-curing harvest process.

After tobacco is cured, it is moved from the curing barn into a storage area for processing. If whole plants were cut, the leaves are removed from the tobacco stalks in a process called stripping. For both cut and pulled tobacco, the leaves are then sorted into different grades. In colonial times, the tobacco was then "prized" into hogsheads for transportation. In bright tobacco regions, prizing was replaced by stacking wrapped "hands" into loose piles to be sold at auction. Today, most cured tobacco is baled before sales are made under pre-sold contracts.

Cut plants or pulled leaves are immediately transferred to tobacco barns (kiln houses), where they will be cured. Curing methods vary with the type of tobacco grown, and tobacco barn design varies accordingly.

Air-cured tobacco is hung in well-ventilated barns and allowed to dry over a period of four to eight weeks. Air-cured tobacco is low in sugar, which gives the tobacco smoke a light, sweet flavor, and a high nicotine content. Cigar and burley tobaccos are air cured.

Fire-cured tobacco is hung in large barns where fires of hardwoods are kept on continuous or intermittent low smoulder and takes between three days and ten weeks, depending on the process and the tobacco. Fire curing produces a tobacco low in sugar and high in nicotine. Pipe tobacco, chewing tobacco, and snuff are fire cured.

Flue-cured tobacco was originally strung onto tobacco sticks, which were hung from tier-poles in curing barns (Aus: kilns, also traditionally called oasts). These barns have flues which run from externally fed fire boxes, heat-curing the tobacco without exposing it to smoke, slowly raising the temperature over the course of the curing. The process will generally take about a week. This method produces cigarette tobacco that is high in sugar and has medium to high levels of nicotine. The Smith Tobacco Barn is an example of traditional, flue-cured tobacco barn.