"Change" is a song performed by American singer-songwriter Taylor Swift. Swift self-penned the song and co-produced it alongside Nathan Chapman. The song was released on August 8, 2008, as a promotional single from Swift's second studio album, Fearless (2008), with all proceeds being donated to the United States Olympic team. "Change" was written about Swift's hopes and aspirations in regards to succeeding, although being signed to the smallest record label in Nashville, Tennessee. The track was later chosen as one of the themes for the 2008 Summer Olympics and was eventually included on the AT&T Team USA Soundtrack. "Change" is musically pop rock and uses divergent string instruments. Lyrically, it speaks of overcoming obstacles and achieving victory.

It received mixed reviews from music critics and was able to peak at number ten on the Billboard Hot 100, becoming Swift's first song to reach the top ten on the chart. The music video for "Change" was directed by Shawn Robbins and features Swift performing with a band in a ballroom. An alternate version of the video features footage of the United States Olympic team at the 2008 Summer Olympics. The song was performed during Swift's first headlining tour, the Fearless Tour in 2009.

When Swift was first signed to Big Machine Records, it was a new and extremely small record label, the smallest in Nashville, Tennessee, that consisted of approximately twelve employees[1] and her as the only signed artist.[2] At some point, Swift realized that it would be more difficult for her to achieve success through a small label, than in a larger label,[2] constricting their contacts and making it nearly impossible to embark on concert tours and have presenter or performer slots on award shows.[1] In addition, as the only signed artist, she could not ask for favors and only had herself to encourage the hope that scenarios would eventually change. Swift described the scenario as an "uphill climb"[2] and said, "There was this moment where I sat there and was like, ‘When are we going to get a fighting chance? We’re the smallest record label in Nashville, but we want this really bad.’"[1] After reassuring to herself that it would be different in the future, she wrote the beginning of "Change".[2] She let the track sit for a while, waiting for a remarkable event to trigger its completion.[3] She then completed the track the day after she won the Horizon Award at the 2007 Country Music Association Awards and saw Scott Borchetta, the president of Big Machine Records, crying.[1] "That’s when I finished [it], because I knew I couldn’t finish it until something like that happened. It was absolutely the most amazing night of my life, getting to see the emotion of all the people who worked so hard for me."[3]

The song was recorded in December 2007, when she recognized it applied to more scenarios and had a "bigger meaning" than originally.[4] American television network National Broadcasting Company (NBC) had asked Swift to perform at the 2008 Summer Olympics in Beijing, China. However, an appearance could not be scheduled because Swift was touring at the time. Instead, Swift's father suggested using "Change" as a theme for the event.[3] Therefore, "Change" was used during NBC's daily video highlights in August 2008, prior to the release of Fearless.[5] "I wrote the song ‘Change’ as an underdog story. It’s kind of crazy to think that the Olympics chose this as one of the songs to play during the Olympic Games", Swift commented.[1] It was included on the AT&T Team USA Soundtrack (2008). The song was released as a promotional single on the iTunes Store on August 8, 2008. All proceeds were donated to the United States Olympic team.[5]

"Change" is a song with a length of four minutes and forty seconds.[6] Alexis Petridis of The Guardian described the song's genre as a "kind of orthodontically perfect pop rock". He said the most country part of the song were lyrics that referenced Catholicism with the word "hallelujah".[7] It is set in common time and has a moderate tempo of 100 beats per minute.[8] It is written in the key of F major and Swift's vocals span one octave, from F3 to B♭4.[8] They were described to have a nasal tone when using her voice above mezzo forte.[9] It follows the chord progression F–F/E–Dm–B♭.[8] "Change" relies on a string-swathed instrumentation.[10]

The lyrics of "Change" speak of overcoming obstacles and achieving triumph,[11] while instilling hope in oneself.[12] It centers around the concept of surpassing others' expectations and the limitations they set out. The song turns the notion of fearlessness into a movement that is not specified.[13] Dave Heaton of PopMatters noted the lyric "I believe in whatever you do" meant Swift was unconcerned with the specifics of the cause. He presumed it was a universal message or was about changing the traditions of country music sound and defying the expectations of what country artists can achieve with their careers.[13] Jody Rosen of Rolling Stone believed the lyrics addressed political issues.[10] 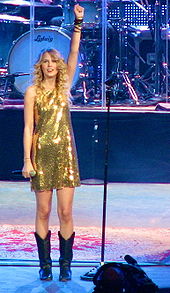 The song received generally mixed reviews from contemporary critics. Jonathan Keefe of Slant Magazine was unimpressed by Swift's vocals, describing them as unpleasant and thin. Keefe added that her voice often cracked and, therefore, prevented the song from becoming an anthem.[9] Jody Rosen of Rolling Stone magazine considered the track to be vague.[10] Dave Heaton of PopMatters compared "Change" and Swift's "Long Live", both which ended Fearless and Speak Now (2010), respectively. He stated, "There’s something really generic about the song[s], but that quality becomes the cornerstone of an anthem."[12] Heaton also commented that the song was appealing to multiple audiences, as long as they felt restrained by any scenario.[13]

On the week ending August 30, 2008, "Change" debuted at its peak position of number ten on the Billboard Hot 100, selling over 131,000 digital downloads, making it Swift's best-charting song at the time and first top ten appearance.[14] In the following week, the song descended to number forty[15] and then number one-hundred on the Billboard Hot 100, marking its third and last week on the chart.[16] The song is one of thirteen songs from Fearless charted within the top forty of the Billboard Hot 100, breaking the record for the most top forty entries from a single album.[17] "Change" also peaked at number fifty-seven on the Hot Country Songs chart on the week ending August 30, 2008.[18] The track also peaked at number twenty-one on the now-defunct Pop 100 chart.[19] 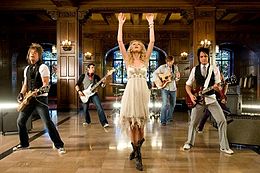 Swift in the music video for "Change"

The accompanying music video for "Change" was directed by Shawn Robbins. It was filmed at the ballroom in the Scottish Rite Cathedral in Indianapolis, Indiana.[20] The video commences with a shot of a stained glass window. It then transitions to Swift, clothed by a white cocktail dress and black cowboy boots, performing alongside a backup band in an empty ballroom. The band members dressed semi-casual and played the instruments bass, drums, and various guitars. As the video progresses, Swift is seeing singing and dancing. Cut-scenes feature close-ups of Swift in another setting, clothed by another white cocktail dress and surrounded by hot pink, white, and blue twinkling lights in a black background. The video concludes with Swift turning back and walking toward the backup band. An alternate version of the video features footage from United States Olympic team at the 2008 Summer Olympics.[20] Both versions of the music video premiered on NBC.com in August 2008.[20]

Swift has performed the track on the AOL Sessions.[21] Since, Swift has performed the track at the Studio 330 Sessions,[22] the 2009 CMA Music Festival,[23] the 2009 V Festival,[24] and the Australian charity concert Sydney Sound Relief.[25] Swift's first televised performance of "Change" was at the 2010 Academy of Country Music Awards, where she, donning a sparkly evening gown, sang on an elevator suspended from the crowd. She then came down, where she was joined by a teenage choir, and finished the performance by surfing the crowd.[13] Swift performed "Change" on the first North American leg of the Fearless Tour. During the performances, Swift wore a sparkly silver and black dress with black, leather boots. She noted, "It's been a tough year", and commenced singing throughout the stage as images of victims of economic and natural disasters were projected on the video screens. As the song approximated, its last refrain, she said, "Things turn back around." Then, scenes of triumph appeared on the video screens.[26] Craig Rosen of The Hollywood Reporter attended the May 22, 2009 concert in Los Angeles, California at the Staples Center and commented, "It was overly simplistic and a bit naive, but still hard not to be moved."[26] Jon Pareles of The New York Times said Swift offered the audience with optimistic thinking with the performance in the August 27, 2009 concert at Madison Square Garden in New York City.[27]