All My Life (Foo Fighters song)

All My Life (Foo Fighters song)

Infobox Single
Name = All My Life 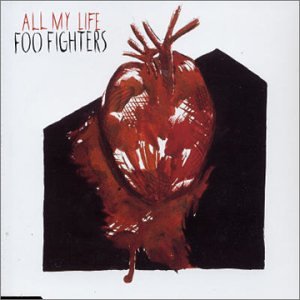 "All My Life" is a song by the American hard rock band Foo Fighters, released as the first single from their fourth album, "". The song won a for best performance, and spent ten straight weeks at #1 on the chart, coincidentally succeeding Nirvana and their unreleased final recording, "". notes that the band had wanted a heavier sounding song to appear as a single, stating that the band were "coming out with "" and "" and other songs that had middle-of-the-road melodies." [Kerrang! Legends: Foo Fighters pg.114]

Regarding the song's content, Grohl notes that "the middle section is about eating pussy and the verses are kind of vague." [Kerrang! Legends: Foo Fighters pg.114]

According to , the song: "was originally an instrumental and it went through a few different versions. At first it was really dissonant and noisy. The middle section sounded like "Wipe Out" [by The Sufaris] . It was just nuts! We recorded the instrumental and I had no idea how I was gonna' sing it. Again, that was another one that our manager said, "That's the song!" And we said, "Really? You think that's the one people will like?" [Kerrang! Legends: Foo Fighters pg.114]

The video, directed by Grohl, consists of the band performing the song on stage in front of a video screen at The Forum in Inglewood, , near . At the conclusion, it is revealed that they had been performing in an empty arena. The video was included on a DVD extra that was packaged with the CD version of the album.