Get Yer Ya-Ya's Out! The Rolling Stones in Concert

Get Yer Ya-Ya's Out! The Rolling Stones in Concert 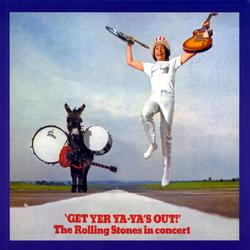 Many, including The Rolling Stones, consider this to be their first official full-length live release, despite the appearance of the US-only "" in 1966 as a contractual obligation product. One reason for releasing a live album was to counter the release of the "Live'r Than You'll Ever Be" bootleg recording of an Oakland performance on the same tour, a recording which was even reviewed in "" magazine.

Having not toured since April 1967, The Rolling Stones were eager to hit the road by 1969. With their two most recent albums, "" and "" being highly praised, audiences were anticipating their live return. Their 1969 American Tour's trek during November into December , with , (replaced on some dates by ), and as support acts, played to packed houses. The tour was the first for with The Rolling Stones, having replaced shortly before Jones' July death; the performances prominently showcased the guitar interplay of Taylor with .

The performances captured for this release were recorded on – at 's , while "" was recorded in Baltimore on . Overdubbing was undertaken during January and February 1970 in London's . Contrary to popular belief, no instruments were overdubbed, although on bootlegs, examples are known of Keith Richards trying out different guitar parts (e.g. a guitar solo on ""). The finished product featured new lead vocals on half the tracks, and added backing vocals by Keith Richards on several other.Fact|date=February 2007

Some of the performances, as well as the photography session for the album cover featuring and a donkey are depicted in the documentary film "Gimme Shelter", and shows Jagger and Watts on an Alabama road in early December 1969 posing with the donkey. The actual cover photo however was taken in early February 1970 in London, and does not originate from the 1969 session. The photo, featuring Watts with guitars and binoculars hanging from the neck of a donkey, was inspired by the lyrics to 's "" (although these lyrics refer to a mule).

"'Get Yer Ya-Ya's Out!' The Rolling Stones in Concert" was released in September 1970 - well into the sessions for their next studio album, "", and was very well-received critically and commercially, reaching #1 in the UK and #6 in the US where it went platinum. Except for compilations, it was the last Rolling Stones album released through in the UK and in the US before launching their own label.

The title of the album was adapted from the song "Get Yer Yas Yas Out" by in which "yas yas" is a euphemism for "ass" (). The phrase used in Fuller's song was "get your yas yas out the door". [http://www.tabernablues.com/autores/terminologia/]

In August 2002, "'Get Yer Ya-Ya's Out!' The Rolling Stones in Concert" was reissued in a new remastered album and SACD by .

A detailed breakdown of the potential overdubs on "Ya-Ya's" can be found here:
*http://members.aol.com/jmpjflash/yaya.htm