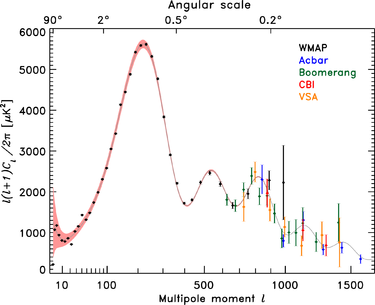 The power spectrum of the cosmic microwave background radiation temperature anisotropy in terms of the angular scale (or multipole moment). Diffusion damping can be easily seen in the suppression of power peaks when l ≳ 1000.[1]

In modern cosmological theory, diffusion damping, also called photon diffusion damping, is a physical process which reduced density inequalities (anisotropies) in the early universe, making the universe itself and the cosmic microwave background radiation (CMB) more uniform. Around 300,000 years after the Big Bang, during the epoch of recombination, diffusing photons travelled from hot regions of space to cold ones, equalising the temperatures of these regions. This effect is responsible, along with baryon acoustic oscillations, the Doppler effect, and the effects of gravity on electromagnetic radiation, for the eventual formation of galaxies and galaxy clusters, these being the dominant large scale structures which are observed in the universe. It is a damping by diffusion, not of diffusion.[2]

The strength of diffusion damping is calculated by a mathematical expression for the damping factor, which figures into the Boltzmann equation, an equation which describes the amplitude of perturbations in the CMB.[3] The strength of the diffusion damping is chiefly governed by the distance photons travel before being scattered (diffusion length). What affect the diffusion length are primarily the properties of the plasma in question: different sorts of plasma may experience different sorts of diffusion damping. The evolution of a plasma may also affect the damping process.[4] The scale on which diffusion damping works is called the Silk scale and its value corresponds to the size of galaxies of the present day. The mass contained within the Silk scale is called the Silk mass and it corresponds to the mass of the galaxies.[5]

Diffusion damping took place about 13.7 billion years ago, during the stage of the early universe called recombination or matter-radiation decoupling. This period occurred between 240,000 and 310,000 years after the Big Bang.[6][7][nb 1] Recombination was the stage during which simple atoms, e.g. hydrogen and helium, began to form in the cooling, but still very hot, soup of protons, electrons and photons that composed the universe. Prior to the recombination epoch, this soup, a plasma, was largely opaque to the electromagnetic radiation of photons. This meant that the permanently excited photons were scattered by the protons and electrons too often to travel very far in straight lines.[7] During the recombination epoch, the universe cooled rapidly as free electrons were captured by atomic nuclei; atoms formed from their constituent parts and the universe became transparent: the amount of photon scattering decreased dramatically. Scattering less, photons could diffuse (travel) much greater distances.[2][8] There is no significant diffusion damping for electrons, which cannot diffuse nearly as far as photons can in similar circumstances. Thus all damping by electron diffusion is negligible when compared to photon diffusion damping.[9]

Acoustic perturbations of initial density fluctuations in the universe made some regions of space hotter and denser than others.[10] These differences in temperature and density are called anisotropies. Photons diffused from the hot, overdense regions of plasma to the cold, underdense ones: they dragged along the protons and electrons: the photons pushed electrons along, and these, in turn, pulled on protons by the Coulomb force. This caused the temperatures and densities of the hot and cold regions to be averaged and the universe became less anisotropic (characteristically various) and more isotropic (characteristically uniform). This reduction in anisotropy is the damping of diffusion damping. Diffusion damping thus damps temperature and density anisotropies in the early universe. With baryonic matter (protons and electrons) escaping the dense areas along with the photons; the temperature and density inequalities were adiabatically damped. That is to say the ratios of photons to baryons remained constant during the damping process.[4][5][11][12][13]

Photon diffusion was first described in Joseph Silk's 1968 paper entitled "Cosmic Black-Body Radiation and Galaxy Formation",[14] which was published in The Astrophysical Journal. As such, diffusion damping is sometimes also called Silk damping,[1] though this term may apply only to one possible damping scenario.[9][15][16] Silk damping was thus named after its discoverer.[5][16][17]

The magnitude of diffusion damping is calculated as a damping factor or suppression factor, represented by the symbol

, which figures into the Boltzmann equation, an equation which describes the amplitude of perturbations in the CMB.[3] The strength of the diffusion damping is chiefly governed by the distance photons travel before being scattered (diffusion length). What affect the diffusion length are primarily the properties of the plasma in question: different sorts of plasma may experience different sorts of diffusion damping. The evolution of a plasma may also affect the damping process.[4]

, when factored into the Boltzmann equation for the cosmic microwave background radiation (CMB), reduces the amplitude of perturbations: 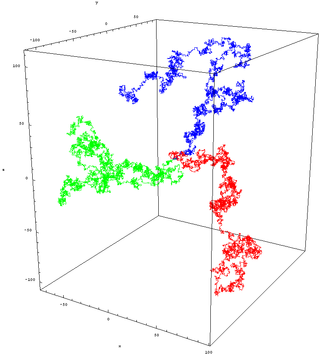 Three random walks in three dimensions. In diffusion damping, photons from hot regions diffuse to cold regions by random walk, so after N steps, the photons have travelled a distance

Mathematical calculations of the damping factor depend on kD, or the effective diffusion scale, which in turn depends on a crucial value, the diffusion length, λD.[20] The diffusion length relates how far photons travel during diffusion, and comprises a finite number of short steps in random directions. The average of these steps is the Compton mean free path, and is denoted by λC. As the direction of these steps are randomly taken, λD is approximately equal to

, where N is the number of steps the photon takes before the conformal time at decoupling (

. That is, the mean free path of the photons is inversely proportional to the electron ionisation fraction and the baryon number density (nb). That means that the more baryons there were, and the more they were ionised, the shorter the average photon could travel before encountering one and being scattered.[4] Small changes to these values before or during recombination can augment the damping effect considerably.[4] This dependence on the baryon density by photon diffusion allows scientists to use analysis of the latter to investigate the former, in addition to the history of ionisation.[20]

The effect of diffusion damping is greatly augmented by the finite width of the surface of last scattering (SLS).[21] The finite width of the SLS means the CMB photons we see were not all emitted at the same time, and the fluctuations we see are not all in phase.[22] It also means that during recombination, the diffusion length changed dramatically, as the ionisation fraction shifted.[23]

In general, diffusion damping produces its effects independent of the cosmological model being studied, thereby masking the effects of other, model-dependent phenomena. This means that without an accurate model of diffusion damping, scientists cannot judge the relative merits of cosmological models, whose theoretical predictions cannot be compared with observational data, this data being obscured by damping effects. For example, the peaks in the power spectrum due to acoustic oscillations are decreased in amplitude by diffusion damping. This deamplification of the power spectrum hides features of the curve, features that would otherwise be more visible.[24][25]

Though general diffusion damping can damp perturbations in collisionless dark matter simply due to photon dispersion, the term Silk damping applies only to damping of adiabatic models of baryonic matter, which is coupled to the diffusing photons, not dark matter,[9] and diffuses with them.[15][16] Silk damping is not as significant in models of cosmological development which posit early isocurvature fluctuations (i.e. fluctuations which do not require a constant ratio of baryons and photons). In this case, increases in baryon density do not require a corresponding increases in photon density, and the lower the photon density, the less diffusion there would be: the less diffusion, the less damping.[13] Photon diffusion is not dependent on the causes of the initial fluctuations in the density of the universe.[20]

Damping occurs at two different scales, with the process working more quickly over short ranges than over longer distances. Here, a short length is one that is lower than the mean free path of the photons. A long distance is one that is greater than the mean free path, if still less than the diffusion length. On the smaller scale, perturbations are damped almost instantaneously. On the larger scale, anisotropies are decreased more slowly, with significant degradation happening within one unit of Hubble time.[9]

The Silk scale and the Silk mass

Diffusion damping exponentially decreases anisotropies in the CMB on a scale (the Silk scale)[5] much smaller than a degree, or smaller than approximately 3 megaparsecs.[1] This angular scale corresponds to a multipole moment

.[12][26] The mass contained within the Silk scale is the silk mass. Numerical evaluations of the Silk mass yield results on the order of 1013 solar masses at recombination[27] and on the order of the mass of a present-day galaxy or galaxy cluster in the current era.[5][9]

As diffusion damping works at this level, scientists say it affects small angles and corresponding anisotropies. This is to be contrasted with other effects which operate on a scale called intermediate

. Searches for anisotropies on a small scale are not as difficult as those on larger scales, partly because they may employ ground-based telescopes and their results can be more easily predicted by current theoretical models.[28]

Scientists study photon diffusion damping (and CMB anisotropies in general) because of the insight the subject provides into the question, "How did the universe come to be?". Specifically, primordial anisotropies in the temperature and density of the universe are supposed to be the causes of later large-scale structure formation. Thus it was the amplification of small perturbations in the pre-recombination universe that grew into the galaxies and galaxy clusters of the present era. Diffusion damping made the universe isotropic within distances on the order of the Silk Scale. That this scale corresponds to the size of observed galaxies (when the passage of time is taken into account) implies that diffusion damping is responsible for limiting the size of these galaxies. The theory is that clumps of matter in the early universe became the galaxies that we see today, and the size of these galaxies is related to the temperature and density of the clumps.[29][30]

Diffusion may also have had a significant effect on the evolution of primordial cosmic magnetic fields, fields which may have been amplified over time to become galactic magnetic fields. However, these cosmic magnetic fields may have been damped by radiative diffusion: just as acoustic oscillations in the plasma were damped by the diffusion of photons, so were magnetosonic waves (waves of ions travelling through a magnetised plasma). This process began before the era of neutrino decoupling and ended at the time of recombination.[27][31]