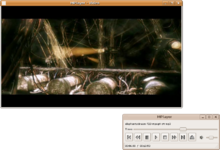 MPlayer, an example of a cross-platform media player

Media player is a term typically used to describe computer software for playing back multimedia files. While many media players can play both audio and video, others focus only on one media type or the other. Such players are known as either audio players or video players and often have a user interface tailored for the specific media type.

Media players often display icons known from physical devices such as tape recorders and CD players. Examples of these icons are

Rhythmbox, an example of a player providing a media library

Many media players, especially those designed to play music, display available songs in a format known as a media library, which allows the user to organize their music by categories such as artist, album, genre, year, and rating. Examples of media players that include media libraries are Amarok, Banshee, Clementine, iTunes, Rhythmbox, Winamp, and Windows Media Player.