Relations between the two countries date back to the reigns of Prince Charles III of Monaco and Tsar Alexander II of the Russian Empire. During this period the two nations signed numerous treaties and agreements, including the extradition of criminals, mutual legal assistance, recognition of the civil status of people and for medical aid. After the establishment of the Order of Saint-Charles in Monaco in 1858, Tsar Alexander II became the first member of a royal family to be bestowed the Monegasque award.[1] In 1877, Charles III appointed Chevalier Jean Plancher as the Monegasque Consul in Saint Petersburg.[2]

Following the Russian Revolution of 1917 relations between the two states were suspended. Prior to the admittance of Monaco into the United Nations in 1993, the establishment of diplomatic relations with the Soviet Union was not a priority, however the two states maintained contacts via the Soviet Embassy in Paris and the Embassy of France in Moscow.[1] 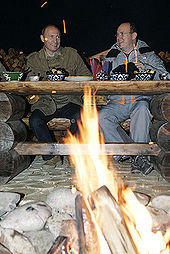 Vladimir Putin with Albert II during a trip to Tuva in 2007.

The current Ambassador of Russia to Monaco is Alexander Orlov, who was appointed by Russian President Dmitry Medvedev on 1 December 2008.[7] Orlov, who is resident in Paris, presented his credentials to Albert II, Prince of Monaco on 24 March 2009 at the Prince's Palace of Monaco.[6][8] The current Ambassador of Monaco to Russia is Claude Giordan, with residence in Berlin, who presented his credentials to Russian Deputy Minister of Foreign Affairs Vladimir Titov in Moscow on 12 June 2009.[8][9]

On 12 August 2007, Russian President Vladimir Putin hosted Albert II at Peterhof in Saint Petersburg, where Putin thanked the Monegasque Prince for his support for Russia's successful bid for the 2014 Winter Olympics in Sochi on the Black Sea.[10] In what was seen as a sign of Putin's gratitude, the following day the two leaders travelled to Tuva in Central Asia.[11] Whilst in Tuva, the two leaders visited the Por-Bazhyn fortress where an archaeological dig was underway, and went on a rafting and fishing trip on the Yenisei River.[10] During the trip, Albert was presented with two Baikal seals from Alexander Tishanin, the Governor of Irkutsk Oblast, which were later placed in a home at Monaco's Oceanographic Museum.[12]

According to a former adviser to Albert II, in a sign of the increasing friendship between Putin and Albert II, Russian officials sent a team of builders to Monaco in 2008 to erect a three-bedroom dacha in the garden of Albert's estate, located in the hills behind Monte Carlo.[13]

Monaco's status as a tax haven has turned the principality into a favourite playground for rich Russians.[13] There are currently four Russian enterprises doing business on the territory of Monaco.[1]

Trade turnover between the two nations is nominal, reaching approximately €1 million per year. Russian exports to Monaco are food products, optical instruments and devices, and clocks and watches. Monegasque exports to Russia are food products, clothing, automobiles and perfumery products.[1]

Cultural relations between Monaco and Russia date back to the beginning of the twentieth century. Between 1911 and 1929 Sergei Diaghilev's Ballets Russes was staged in Monaco.[1] To mark the centenary of Ballets Russes performances in Monaco, in 2009/2010, the Monte-Carlo Philharmonic Orchestra will stage concerts marking the works of Diaghilev, which include performances of Petrushka, Le sacre du printemps, Daphnis et Chloé, Shéhérazade and L'oiseau de Feu. The Louis Notari Library will also have an exhibition on Diaghilev and his troupe.[14]

Since the dissolution of the Soviet Union various famous Russian cultural organisations have toured to Monaco, including the Bolshoi Ballet, Mariinsky Ballet, Red Army Choir and Dance Ensemble, amongst others.[1]