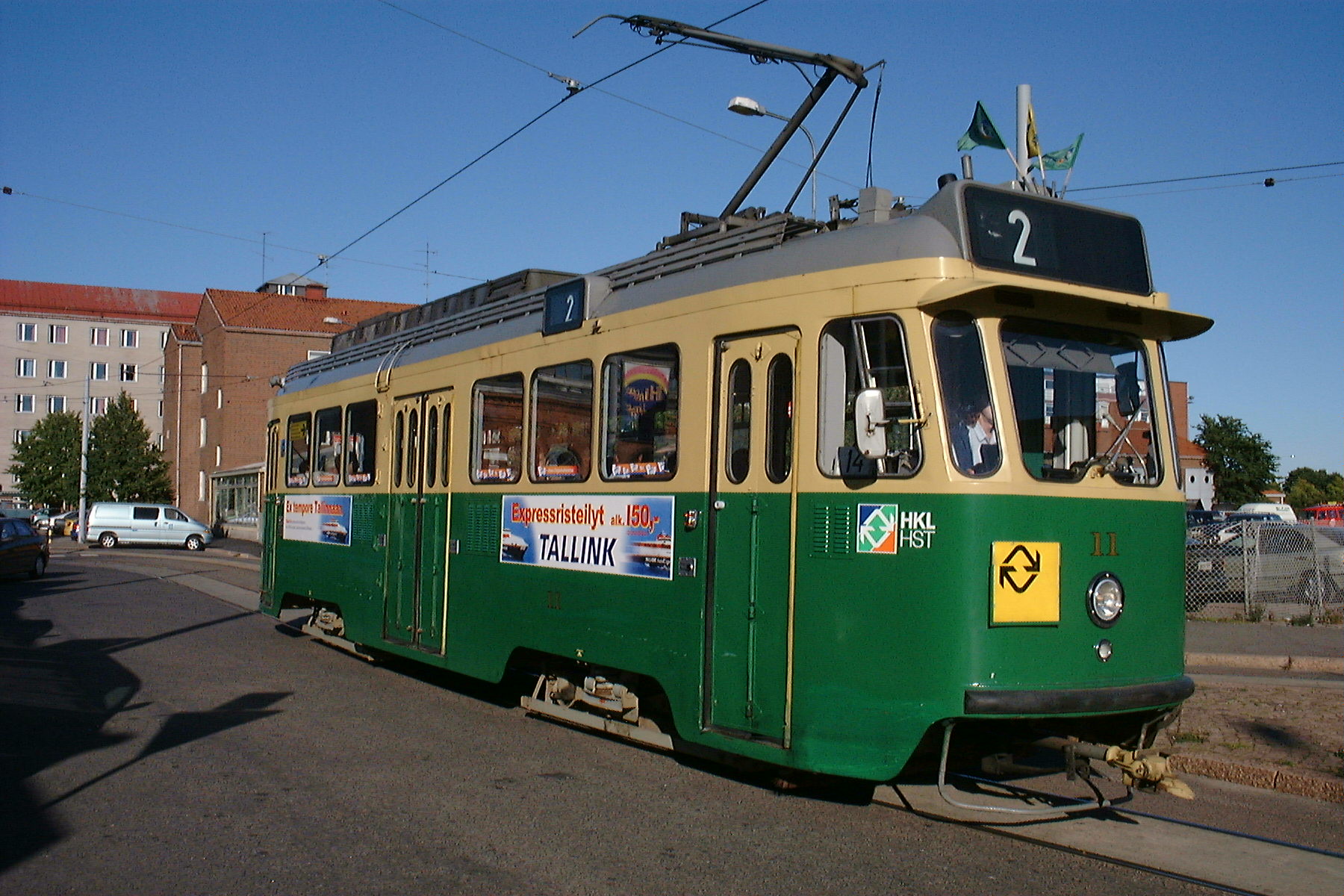 HM V is a class of two-bogie four-axle (Bo'Bo' ) operated by ( _fi. Helsingin kaupungin liikennelaitos, abbreviated HKL; _sv. Helsingfors stads trafikverk, abbreviated HST) on the network. All trams of this type were built by the Finnish tram manufacturer in 1959.

The first trams of this type were withdrawn from service in 1993. As of 2008 six trams (numbers 9, 11&ndash;14 and 175) remain in operational condition. Of these two have been extensively repaired and are occasionally used in normal service (numbers 9 and 12), one has been converted into a restaurant tram (former no. 15, now no. 175 "") and one is used as a non-passenger carrying advertisement tram (no. 14).

The HM V type trams, alongside the near-identical RM 3 type produced at the same time by , were the last development in a series of five near-identical tram types produced by Karia and Valmet for operations on the Helsinki and network during the 1950s (the previous types being HM IV and RM 1 for Helsinki and RM 2 for Turku).

HKL ordered the HM V type trams from Karia, a daughter company of , in 1957. The series designation stands for "Helsingin moottorivaunu, viides sarja" ( _en. Helsinki motor tram, series five). Karia built the bodies and assembled the trams, while Sisu (another daughter company of Suomen autoteollisuus) supplied the bogies and the electronics.

The first HM V tram, number 1, was delivered to the HKL on , with number 15 delivered last in the series on . Coinciding with the delivery of these new trams the HKL had decided to reset their numbering scheme. Therefore the HM V trams were numbered starting from one and not from 376, as they would have been had the old numbering been continued. The HM V trams were built to be compatible with the HP II type trailers that had been constructed in 1958&ndash;1959, also by Karia. The usage of trailers in Helsinki ended in 1983, although the couplers needed for hauling trailers were retained in the HM V type trams for many years afterwards, number 14 being the last tram to have one, with the coupler removed only in 2006. [Pölhö, Pykälä-Aho (1996). p. 194.]

Originally the HM V trams were built for two-person operations, with a separate driver and conductor. Between 1978 and 1982 they were converted to one-person operations, with the driver also acting as the ticket seller.The first HM V units to be withdrawn from service were numbers 5 and 6, withdrawn in 1993, with number 7 following in 1994. In 1994 work also begun on converting number 15 into a pub tram. These works were completed in 1995, when number 15 was renumbered into number 175 in honour of the 175th anniversary of the brewery, who also paid the conversion work of the tram. In addition to be being renumbered, the tram was named (from Helsinki slang "Spåra", tram, and "Koff", a beer brand brewed by Sinebrychoff). Also during 1995 number 11 was rebuilt as a "NAC protype" by , with new traction motors and control devices.

Originally all HM V trams were painted in the traditional yellow/green livery used in HKL trams, with the top half of the carriage painted yellow and the bottom half green. In 1995 on conversion into the Spårakoff pub tram, number 175, ex-15, recivered a new all-red livery advertiting Koff beer. Numbers 8, 9 and 15 had occasionally been used as advertisement trams during the 90s, and from 2005 onwards number 14 has been used as an advertisement tram, covered entirely in adverts of various companies. [cite web |url=http://www.raitio.org/ratikat/hkimain/mainos.htm|title=Mainosvaunut |accessdate=2008-08-14 |last=Rauhala |first=Jorma |date= |format= |publisher=Finnish Tramway Society |language=Finnish ]

During the extensive repairs at TTTK in Tallinn, number 9 and 12 have been painted with a modified version of the original livery, with added silver decorative stripes; one running between the yellow and green fields, and another near the bottom of the carriage.

In the original interior layout with a separate conductor and driver the HM V trams had capacity of 29 seated passengers and 69 standing passengers. During the rush hour this could be exceeded by an additional 50 standing passengers. On conversion to one-person operation during the late 70s and early 80s, the conductor's seat was replaced with two additional seats, bringing the seating capacity up to 31, while the standing capacity was downsized to 57 plus an additional 44 during the rush hour. Following conversion into the Spårakoff, tram number 175 (ex-15) has a capacity of 24 all-seated passengers.

"Keppi-Karia", "keppi-Karjaa", "laihialainen" and "laihian nivel" have been used as nicknames for the HM V trams. [cite web |url=http://www.hel.fi/wps/portal/HKL_en/HKL-Tram_Transport?WCM_GLOBAL_CONTEXT=/HKL/en/HKL+Info/Organization/HKL+Tram/Fleet/HKL+1_15 |title=HKL 1-15 |accessdate=2008-08-14 |last= |first= |date=2008-08-05 |format= |publisher=Helsinki City Transport |language= ] Below are some of the explanations that have been offered for these nicknames.

* "Keppi-Karia" ( _en. stick-Karia) and "keppi-Karjaa" ( _en. stick-Karjaa) &mdash; reportedly after the stick-like controlling device in the trams combined with the name/location of the manufacturer. [cite web |url=http://jlf.fi/f17/75-sparien-lempinimet/#post388 |title=Kepit ja ratit |accessdate=2008-08-14 |last=Sillanpää |first=Kai |date=2005-07-05 |format= |publisher=Joukkoliikennefoorumi |language=Finnish ]
* "Laihialainen" (roughtly "person/thing from "), "Laihian nivel" ( _en. joint of Laihia) — In Finnish the inhabitants of the municipality of Laihia are believed to be extreme s, while an is in Finnish referred to as "nivelvaunu", literally "ed tram". These nicknames are said to refer to the changes made to the trams when they were converted to one-person operations. At the same time they were also refitted with door controllers similar to the newer Nr I type articulated trams, making the HM V units into "a miser's articulated tram". [cite web |url=http://jlf.fi/f17/75-sparien-lempinimet/#post385 |title=Re: Spårien lempinimistä |accessdate=2008-08-14 |last=Gustafsson |first=Jussi |date=2005-07-05 |format= |publisher=Joukkoliikennefoorumi |language=Finnish ] An alternative explanation for the name "laihialainen" is that the removal of the conductors made them "stripped models" and the nickname was used to describe the lack of conductors. [cite book |title=Sata vuotta sähköllä |last=Tolmunen |first=Tapio |year=2000 |publisher=HKL-Raitioliikenne |location= |isbn=952-91-2495-3 |pages=p. 52 |url= |language=Finnish ]