In the Aarne-Thompson folklore classification, tales of this kind are grouped together as type 709, Snow White. Others of this kind include Bella Venezia, Myrsina, Nourie Hadig and Gold-Tree and Silver-Tree.[1] 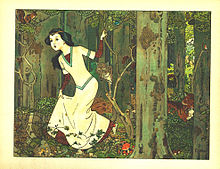 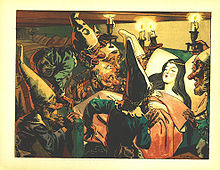 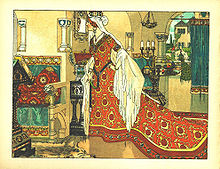 The queen asks the magic mirror 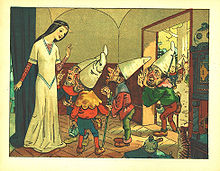 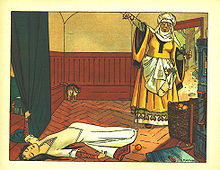 The queen and the poisoned apple 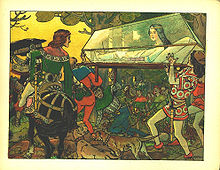 The prince and Snow White's awakening 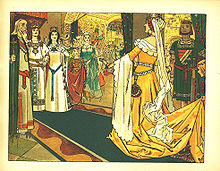 The queen arrives to the wedding

Soon after, the king takes a new wife, who is beautiful but also very vain. The Queen possesses a magical mirror, an animate object that answers any question, to whom she often asks: "Mirror, mirror on the wall / Who is the most beautiful of all?" (in German "Spieglein, Spieglein, an der Wand / Wer ist die Schönste im ganzen Land?") to which the mirror always replies "You, my queen, are fairest of all." But when Snow White reaches the age of seven, she becomes as beautiful as the day, and when the queen asks her mirror, it responds: "Queen, you are full fair, 'tis true, but Snow White is fairer than you." Though in another version, the mirror simply replies: "Snow White is the fairest of them all."

The queen becomes jealous, and orders a huntsman to take Snow White into the woods to be killed. She demands that the huntsman, as proof of killing Snow White, return with her lungs and her liver. The huntsman takes Snow White into the forest, but after raising his knife to stab her, he finds himself unable to kill her as he has fallen deeply in love with her. Instead, he lets her go, telling her to flee and hide from the Queen. He then brings the queen the lungs and the liver of a boar, which is prepared by the cook and eaten by the queen.

In the forest, Snow White discovers a tiny cottage belonging to a group of seven dwarves, where she rests. There, the dwarves take pity on her, saying "If you will keep house for us, and cook, make beds, wash, sew, and knit, and keep everything clean and orderly, then you can stay with us, and you shall have everything that you want." They warn her to take care and let no one in when they are away delving in the mountains. Meanwhile, the Queen asks her mirror once again "Who's the fairest of them all?", and is horrified to learn that Snow White is not only alive and well and living with the dwarves, but is still the fairest of them all.

Three times the Queen disguises herself and visits the dwarves' cottage while they are away during the day, trying to kill Snow White. First, disguised as a peddler, the Queen offers colorful stay-laces and laces Snow White up so tight that she faints, causing the Queen to leave her dead on the floor. However, Snow White is revived by the dwarves when they loosen the laces. Next, the Queen dresses as a different old woman and brushes Snow White's hair with a poisoned comb. Snow White again collapses, but again is saved by the dwarves. Finally, the Queen makes a poisoned apple, and in the disguise of a farmer's wife, offers it to Snow White. When she is hesitant to accept it, the Queen cuts the apple in half, eats the white part and gives the poisoned red part to Snow White. She eats the apple eagerly and immediately falls into a deep stupor. When the dwarves find her, they cannot revive her, and they place her in a glass coffin, assuming that she is dead.

Time passes, and a prince traveling through the land sees Snow White. He strides to her coffin. The prince is enchanted by her beauty and instantly falls in love with her. He begs the dwarves to let him have the coffin. The prince's servants carry the coffin away. While doing so, they stumble on some bushes and the movement causes the piece of poisoned apple to dislodge from Snow White's throat, awakening her. The prince then declares his love for her and soon a wedding is planned.

The vain Queen, still believing that Snow White is dead, once again asks her mirror who is the fairest in the land, and yet again the mirror disappoints her by responding that "You, my queen, are fair; it is true. But the young queen is a thousand times fairer than you."

Not knowing that this new queen was indeed her stepdaughter, she arrives at the wedding, and her heart fills with the deepest of dread when she realizes the truth. As punishment for her wicked ways, a pair of heated iron shoes are brought forth with tongs and placed before the Queen. She is then forced to step into the iron shoes and dance until she drops dead. (Other versions imply that she dies of a heart attack.)[3]

In their first edition, the Brothers Grimm published the version they had first collected, in which the villain of the piece is Snow White's jealous mother. In a version sent to another folklorist prior to the first edition, additionally, she does not order a servant to take her to the woods, but takes her there herself to gather flowers and abandons her; in the first edition, this task was transferred to a servant.[4] It is believed that the change to a stepmother in later editions was to tone down the story for children.[5]

Snow White's triple seeming-death and resurrection, beyond an amusement or wish-fulfilling temporary escape, fulfills the initiatory process of life, as Mircea Eliade described it: "What is called 'initiation' coexists with the human condition, reaffirms the ultimate religious significance of life and the real possibility of a 'happy ending.'"[6]

Maria Tatar interprets the tale[7] as a polarization of women into the evil and active versus the innocent, passive and domestic.

Variations from other European traditions

In the many non-German versions, the dwarves are generally robbers, while the magic mirror is a dialog with the sun or moon.[citation needed]

In a version from Albania, collected by Johann Georg von Hahn,[8] the main character lives with 40 dragons. Her sleep is caused by a ring. The beginning of the story has a twist, in that a teacher urges the heroine to kill her evil stepmother so that she would take her place. The origin of this tale is debated; it is likely no older than the Middle Ages. In fact there are possibly two Albanian versions of Snow White: one where her stepmother tries to kill her, and another where her two jealous sisters try to kill her. "The Jealous Sisters" is another Albanian fairy tale. In both fairy tales the death is caused by a ring.

The story of Snow White is a popular theme for British pantomime. In 2009 Snow White was performed on Åbo Unga Teater in Finland. In Swedish Snow White is called Snövit In some productions of the musical Into the Woods Snow White appears as the illicit love interest of one of the princes. Snow White is the central character in the long running musical Beach Blanket Babylon, which has been performed since 1974 in San Francisco

Snow White is also featured as a playable character in Fairytale Fights. She is shown in Kingdom Hearts: Birth by Sleep and makes a cameo appearance in the first Kingdom Hearts. Kurumi Kobato does her voice in Japanese, and Carolyn Gardner in English.

There is another Brothers Grimm tale called Snow White and Rose Red which also includes a character called Snow White. However, this Snow White is a completely separate character from the one found in this tale. The original German names are also different: Schneewittchen and Schneeweißchen. There is actually no difference in the meaning (both mean "snow white"), but the first name is more influenced by the dialects of Low Saxon while the second one is the standard German version, demonstrating a class difference between the two Snow Whites.[citation needed]

The Walt Disney Company currently has a trademark application pending with the US Patent and Trademark Office, filed November 19, 2008, for the name "Snow White" that would cover all live and recorded movie, television, radio, stage, computer, Internet, news, and photographic entertainment uses, except literature works of fiction and nonfiction.[19]