Central Station (Montreal)
This article is about the railway station in Montreal. For the bus station, see Station Centrale d'Autobus Montreal.

Designed by John Campbell Merrett, the main concourse is located on rue de la Gauchetière West and occupies almost the entire block bounded by de la Gauchetière, University Street, René-Lévesque Boulevard and Mansfield Street. The station is adorned with art deco bas-relief friezes on its interior and exterior.[4] The station building and associated properties are owned by Homburg Invest Inc. as of November 30, 2007. Prior to that, from the station's inception in 1943, it had been owned by Canadian National Railway (CN).

Central Station is at the centre of the Quebec City – Windsor Corridor, the busiest inter-city rail service area in the nation (marketed as the Corridor), which extends from Windsor and Sarnia in the west, through Toronto, Ottawa, and Montreal, to Quebec City in the east. Inter-city trains at Central Station are operated by Via Rail and Amtrak, while commuter rail services are operated by Agence métropolitaine de transport (AMT). The station is also connected to the Montreal Metro subway system.

Central Station is the second-busiest Via Rail station in Canada, after Toronto Union Station. Its Via station code is MTRL; its Amtrak code is MTR, and its IATA code is YMY.

Central Station sits above and next to the site of the now-demolished Canadian Northern Railway's Tunnel Terminal.

At the end of the 1920s, the newly formed Canadian National Railways struggled with disparate Montreal terminals (Bonaventure Station, Tunnel Terminal, Moreau Street Station, and McGill Street) and sought to consolidate them. The solution chosen was to take advantage of the Mount Royal Tunnel to bring trains from the north and east through the tunnel to a large electrified central station. Trains from the south and west gained access by a new elevated viaduct. (Interurban electric trains, however, ended up remaining at McGill Street terminal until the service was abandoned in 1956.) The new station plan allowed for the development of air-rights, similar to Grand Central Terminal and Penn Station in New York City.

Construction started at the end of the 1920s, but was halted during the Great Depression. Construction resumed during World War II and the new station finally opened on July 14, 1943, as the first of a series of large-scale urban redevelopment projects undertaken by CNR and the federal government in Downtown Montreal. Central Station was designed by architect John Campbell Merrett.

The opening of a 'central' station was part of a consolidation project undertaken by CNR since 1929 with the enactment of the Canadian National Montreal Terminals Act, 1929 by Parliament; this saw the closure of former temporary stations operated by CNR predecessors Grand Trunk (Bonaventure Station) and Canadian Northern.

On September 3, 1984, a pipe bomb exploded inside a Central Station locker, killing 3 people and injuring 30 more. The bomb was alleged to have been set by retired American armed forces officer Thomas Bernard Brigham, who claimed[citation needed] to have been protesting Pope John Paul II's visit to Canada. 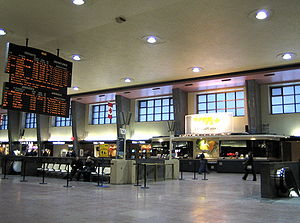 The main concourse inside Central Station

Central Station is located adjacent to CN Headquarters and is an important link in the underground city, with tunnels to Place Ville-Marie, Place Bonaventure, the Queen Elizabeth Hotel, 1000 de La Gauchetière and the Bonaventure metro station.

The station includes Les Halles de la Gare, a shopping and restaurant complex. It also contains two parking facilities, one of which is a multi-level facility that is located above the station. The Montreal Planetarium is located nearby.