Corn stover
For the furnace that can burn corn, see Corn stove. 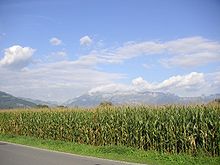 Corn stover consists of the leaves and stalks of maize (Zea mays ssp. mays L.) plants left in a field after harvest and consists of the residue: stalk; the leaf, husk, and cob remaining in the field following the harvest of cereal grain.” Stover makes up about half of the yield of a crop and is similar to straw.[1] Corn stover is a very common agricultural product in areas of large amounts of corn production. As well, the stover can also contain other weeds and grasses[1] the non-grain part of harvested corn and “has low water content and is very bulky.”[2]

Stover can be grazed as forage or collected for use as fodder but is commonly not utilized. It can also be used as a fuel for bioenergy or as feedstock for bioproducts. Maize stover, together with other lignocellulosic biomass, provides about the potential 1.3 billion tons of raw materials that could produce future fuel in the next 50 years.

In the Netherlands and Belgium large improvements on yield are achieved by harvesting the full plant and crushing it while harvesting. The substance is primarily used as the food for cows during the winter season. It is known as "kuilmais". Field corn and sweet corn, two different types of maize, have relatively similar corn stover products. Corn stover is not harvested in all areas where corn is produced. In fact, “some agronomists question whether taking stover out of the field annually will have a negative impact on soil fertility and structure.”[2]

The uses for corn stover are growing over time. One use of corn stover pertains to corn producers who also raise cattle. Corn stover can be beneficial to some cattle producers because the “corn stover can provide a low cost feed source for mid-gestation beef cows.”[3] In addition to the stalks, leaves, husks, and cobs remaining in the field, kernels of grain may also be left over from harvest. These left over kernels, along with the corn stover, serve as an additional feed source for grazing cattle. Over time, the stalks will decrease in value as feed, so it is important to graze the corn stover as soon as possible after harvest. The amount of grazing possible on a field of corn stover is “between one and two months of grazing per cow per acre (50 cows on 50 acres (200,000 m2) for one to two months).”[3]