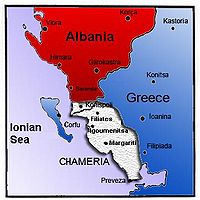 Map of "Çamëria" in white.

Chameria (Albanian: Çamëria, Greek: Τσαμουριά Tsamouriá) is a term used today mostly by Albanians for parts of the coastal region of Epirus in southern Albania and northwestern Greece[1][2] It was also used by Greeks till the mid of 20th century and is frequently found in Greek literature. Today it is obsolete in Greek, surviving mainly in Greek folk songs, and is used mostly by Albanians as it is associated with the Cham Albanians. Most of what is called Chameria is divided between the Greek prefectures of Thesprotia and Preveza, the southern extremity of Albania's Sarandë District and some villages in eastern Ioannina Prefecture. The term is disused in Greece due in part to its perceived connotation of Albanian irredentism, and because the Greek toponyms Epirus and Thesprotia have been established for the region since antiquity.

Chameria was mostly used as a term for the region of modern Thesprotia, during the Ottoman rule.[3][4] It is of uncertain etymology. It possibly derives from the ancient Greek name of the Thyamis river, which in the Albanian language is called Cham (Çam).

The region of Chameria overlaps to a high degree with the ancient and modern region of Thesprotia and the medieval region known as Vagenetia, lying north of Ambracian Gulf and west of the Pindus mountains.[5] The northern boundary of the region is not precisely defined: in Antiquity, the northern boundary of Thesprotia was the Thyamis river,[5] but in the Middle Ages, the presumed borders were pushed to the north. Vagenetia included today's Sarandë District and Delvinë District of Southern Albania, bordering with the Llogara and Muzina mountains in the north and northeast, the same borders that Chameria had in early modern history.[citation needed]

In modern times, the region of Chameria was reduced to the dialectological territory of the Chams, stretching between the mouth of the Acheron river in the south, the area of Butrint in the north, and the Pindus in the east.[6] After the permanent demarcation of the Greco-Albanian border, only two small municipalities were left in southern Albania (Markat and Konispol), while the remainder of the territory fell under the Greek prefectures of Thesprotia (a name revived by the Metaxas Regime in 1936) and Preveza, with a few villages in Ioannina Prefecture.[citation needed]
Pre-War Greek sources say that Chamerian coast extentds from Acheron River to Buthroton (Butrint) and the inland reaches east till the slopes of the Mount Olytsikas (or Tomaros). The center of Chameria is considered to be Paramythia and other areas are Philiati, Parga and Margariti[7]..

The region is mostly mountainous, with valleys and hills concetrated in the southern part, while farmlands are in northern part. Most of them with gridded roads and ditches are within the valleys in the central, southern and the western part. There are five rivers in the region, namely Pavllo in the north, Acheron, Louros Arachthos and Thyamis. Four of them are in Greece, with only the first in Albania.

Late Mycenean sites have been found in the following areas of Chameria[8]:

There are numerous archeological sites from Iron age (10th to 7th c.) onwards. In Thesprotia, which can be considered the centre of Chameria, excavations have brought to light finds of this period in the Kokytos valley.[9] The Nekromanteion of Acheron is probably the most important site of the area in antiquity, mentioned already in Homer. Archaeological findinds indicate that a sancturary existed there by 7th c. BC. It seems that it ceased to function as an oracle in Roman period.[10] Other important settlements are Ephyra, Buthrotum, the Cheimerion (5 Km west of Ephyra), Photike (some identify it with Paramythia), the port of Sybota, the city of Thesprotia, the port city of Elea (in the region of Thesprotia) which is believed to be a Corinthian colony, Pandosia, a colony of Elis, Tarone, near the mouth of river Thyamis, and others, depending on the definition of Chameria.[11] 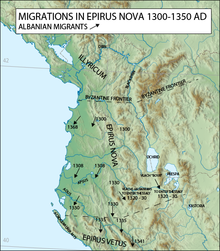 Population movements in Epirus during the 14th century

In Medieval Ages the region was under the jurisdiction of the Roman and later Byzantine Empire. In 1205, Michael Komnenos Doukas, a cousin of the Byzantine emperors Isaac II Angelos and Alexios III Angelos, founded the Despotate of Epiros, which ruled the region until the 15th century. Vagenetia as the whole of Epirus soon became the new home of many Greek refugees from Constantinople, Thessaly, and the Peloponnese, and Michael was described as a second Noah, rescuing men from the Latin flood.

During this period, are documented the first migration of Albanians and Aromanians into the region.[12] In the 1340s, taking advantage of a Byzantine civil war, the Serbian King Stefan Uroš IV Dušan conquered Epirus and incorporated it in his Serbian Empire.[13] During this time, two Albanian states were formed in the region. In the summer of 1358, Nikephoros II Orsini, the last despot of Epirus of the Orsini dynasty, was defeated in battle against Albanian chieftains. Following the approval of the Serbian Tsar, these chieftains established two new states in the region, the Despotate of Arta and Principality of Gjirokastër.[14] Internal dissension and successive conflicts with their neighbours, including the rising power of the Ottoman Turks, led to the downfall of these Albanian principalities to the Tocco family. The Tocco in turn gradually gave way to the Ottomans, who took Ioannina in 1430, Arta in 1449, Angelokastron in 1460, and finally Vonitsa in 1479.[15]

In the 18th century, as the power of the Ottomans declined, the region came under the semi-independent state of Ali Pasha Tepelena, an Albanian brigand who became the provincial governor of Ioannina in 1788. Ali Pasha started campaigns to subjugate the confederation of the Souli settlements in this region. His forces met fierce resistance by the Souliotes warriors. After numerous failed attempts to defeat the Souliotes, his troops succeeded in conquering the area in 1803.[17]

After the fall of the Pashalik, the region remained under the control of the Ottoman Empire, while Greece and Albania declared that their goal was to include in their states the whole region of Epirus, including Thesprotia or Chameria.[18] Finally, following the Balkan Wars, Epirus was divided in 1913, in the London Peace Conference, and the region came under the control of Kingdom of Greece, with only a small portion being integrated into the newly formed State of Albania.[18]

During the Turkish occupation Chameria had a feudal system of administration. The most important and older feudal clan was that of Proniati of Paramythia (Drandakis). 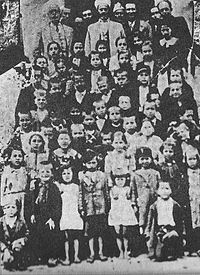 When the region came under Greek control, its population included speakers of Greek, Albanian, Aromanian and Romani. In 1930's the population was approximately 70.000, the muslim Albanian speakers estimated around 18.000-20.000. All the population, independently of religion of ethnicity, are called Chams (Drandakis, p. 405) (According to the 1928 census the total muslim population in Greece was 126.017 [19]).

In the aftermath of the 1923 population exchange between Greece and Turkey, the region was settled by Greek refugees from Asia Minor.[20][Need quotation to verify] In 1936 the Ioannina prefecture where the area was included, divided into two parts and the new prefecture took the name Thesprotia which was its ancient name. Cham Albanians were given religious, but no ethnic minority status and there was little evidence of direct state persecution at this time.[21]

Muslim Chams were counted as a religious minority, and some of them were transferred to Turkey, during the 1923 population exchange,[22] while their property was alienated by the Greek government as part of the relevant agreement between Greece and Turkey.[23] Orthodox Cham Albanians were counted as Greeks, and their language and Albanian heritage were under pressure of assimilation.[24]

During the Axis occupation of Greece (1941–1944), large parts of the Muslim Cham community collaborated with the Italian and German forces committing a number of war crimes.[25] At the end of World War II, nearly all Muslim Chams in Greece were expelled to Albania, because of that activity.[26] However, another part of Muslim Chams provided military support to the resistance forces of the Greek People's Liberation Army, while the rest were civilians uninvolved in the war. Led by Zervas' former officer, Col. Zotos, a loose paramilitary grouping of former guerrillas and local men went on a rampage. In the worst massacre, in the town of Filiates on 13 March, some sixty to seventy Chams were killed.[27]

Since the Medieval Ages, the population of the region of Chameria was of mixed and complex ethnicity, with a blurring of group identities such as Albanian and Greek, along with many other ethnic groups. Information on the ethnic composition of the region over several centuries is almost entirely absent, with the strong likelihood that they did not fit into standard "national" patterns, as the 19th century revolutionary nationalist movements wanted.

The only census that counted Orthodox population of the region of Albanian ethnicity, was an unreliable one made by fascist Italy in 1941. This census found that in the region lived 54,000 Albanians, of whom 26,000 Orthodox and 28,000 Muslim and 20,000 Greeks.[23] After the war, according to Greek censuses where ethno-linguistic groups were counted, Muslim Chams were 113 in 1947 and 127 in 1951.

With the exception of the part of Chameria lying in Albania, the area comprising Chameria is nowadays inhabited mostly by Greeks as a result of the Cham exodus following World War 2 and subsequent assimilation of remaining Chams. The exact number of ethnic Albanians still residing in the Chameria region is uncertain, since the Greek government does not include ethnic and linguistic categories in any official census. According to the pro-Albanian[29][30] author Miranda Vickers, Orthodox Chams today are approximately 40,000.[31] Albanian is still spoken by a minority of inhabitants in Igoumenitsa.[32] According to Ethnologue, Albanian language is spoken as a mother-tongue by about 10,000 Albanians in Epirus and the village of Lechovo, in Florina[33] According to a survey conducted in 1994 the Albanian language in the region is dying fast, because it receives no kind of encouragement.[34]