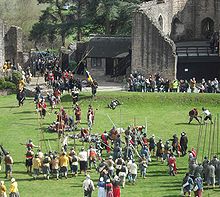 Reenactment of an assault by Parliamentarian forces upon Caldicot Castle

The Sealed Knot is a British historical association dedicated to costumed reenactment of battles and events surrounding the English Civil War.

The Sealed Knot takes its name from the original Sealed Knot, a secret association aimed at the restoration of the monarchy, although the modern incarnation has none of the political affiliations of its namesake. Apart from reenactment, it is also involved in research into the history of the Civil War, and education (at the school or college level) about the same.

The Sealed Knot is a registered charity, and has its own coat of arms. It is the largest re-enactment society in Europe and was formed by the late Brigadier Peter Young, a respected military historian and World War II veteran, at a dinner party with a small group of friends on 28 February 1968 following the publication of "Edgehill 1642 - the Campaign and the Battle". Within a few months it had 200 members and today has a membership of several thousand.

With its large membership and high profile the Sealed Knot is the largest and most well known of all the many re-enactment and historical groups and societies in the UK.[1] Its official journal, Orders of the Daye, is published every two months and sent to all members. It contains information about forthcoming events. Copies of every issue are lodged with the British Library.

The Sealed Knot comprises of a number of Regiments split into Parliamentarian, Royalist and Scots armies.

The Sealed Knot is parodied as The Peeled Nuts in the Discworld series of novels by Terry Pratchett.