Miloš Obilić (Serbian Cyrillic: Милош Обилић, pronounced [mîloʃ ôbilit͡ɕ]; died 1389) was a medieval Serbian knight in the service of Prince Lazar, during the invasion of the Ottoman Empire. He is not mentioned in contemporary sources, but he features prominently in later accounts of the Serbian defeat at the Battle of Kosovo as the legendary assassin of the Ottoman sultan Murad I. Although he remains anonymous in the extant sources until the late 15th century, the dissemination of the story of Murad's assassination in Florentine, Serbian, Ottoman and Greek sources suggests that versions of it circulated widely across the Balkans within half a century after the event.

Miloš became a major figure in Serbian epic poetry, in which he is elevated to the level of the most noble national hero of medieval Serbian folklore. Along with the martyrdom of Prince Lazar and the alleged treachery of Vuk Branković, Miloš's deed became an integral part of Serbian traditions surrounding the Battle of Kosovo. In the 19th century, Miloš also came to be venerated as a saint in the Serbian Church.

The earliest Serbian sources on the Battle of Kosovo, which generally favour the cult of Prince Lazar, do not mention Miloš or his assassination of the sultan.[1] The deed itself is first reported by Coluccio Salutati (died 1406), Chancellor of Florence, in his letter to King Tvrtko I of Bosnia (r. 1353-1391), dated 20 October 1389, on behalf of the Florentine Senate.[1][2] The killer is not named but he is described as one of twelve Serbian noblemen who managed to break through the Ottoman ranks:

"Fortunate, most fortunate are those hands of the twelve loyal lords who, having opened their way with the sword and having penetrated the enemy lines and the circle of chained camels, heroically reached the tent of Amurat [Murad] himself. Fortunate above all is that one who so forcefully killed such a strong vojvoda by stabbing him with a sword in the throat and belly. And blessed are all those who gave their lives and blood through the glorious manner of martyrdom as victims of the dead leader over his ugly corpse."[2][3]

The assassin's first appearance in Serbian sources is in the biography of Stefan Lazarević, Lazar's son, by Constantine the Philosopher, written in the 1440s. The hero, still anonymous, is described as a man of noble birth whom envious tongues had sought to defame before the prince. To prove his loyalty and courage, he left the front line on the pretext of being a deserter, seized the opportunity to stab the sultan to death and was killed himself shortly afterwards.[1] The initial phase of ignominy and its redemption by a courageous plot of slaying the sultan are narrative ingredients which would become essential to the Serbian legend as it evolved in later times.[1]

The loss of the sultan also made an impression on the earliest Ottoman sources. They usually describe how Murad was unaccompanied on the battlefield and an anonymous Christian who had been lying among the corpses stabbed him to death. In the early 15th century, for instance, the poet Ahmedi writes that "[s]uddenly one of the Christians, who was covered in blood and apparently hidden among the enemy dead, got up, rushed to Murad and stabbed him with a dagger."[1][4] One historian from Edirne, Oruc or Uruc, explains the lack of protection by saying that the army was preoccupied with pursuing the enemy in rear flight and introduces an element of deception: the Christian "had promised himself as a sacrifice and approached Murad, who was sitting alone on his horse. Pretending he wished to kiss the sultan's hand, he stabbed the sultan with a sharp dagger."[1][2][5]

Since about the late 15th century, Greek sources also begin to record the event. The Athenian scholar Laonicus Chalcondyles (d. c. 1490) claims to draw on Greek traditions when he refers to Murad's killer as Miloes, "a man of noble birth [... who] voluntarily decided to accomplish the heroic act of assassination. He requested what he needed from Prince Lazar, and then rode off to Murad's camp with the intention of presenting himself as a deserter. Murad, who was standing in the midst of his troops before the battle, was eager to receive the deserter. Miloes reached the sultan and his bodyguards, turned his spear against Murad, and killed him."[1] Writing in the second half of the same century, Michael Doukas regarded the story as worthy of inclusion in his Historia Byzantina. He relates how the young nobleman pretended to desert the battle, was captured by the Turks and professing to know the key to victory, managed to gain access to Murad and kill him.[1]

In 1976, Miodrag Popovic suggested that the narrative elements of secrecy and stratagem in the Serbian tradition were all introduced from Turkish sources. However, Thomas A. Emmert considers it more likely that the interpretation of events in the Serbian tradition, which was to enter further stages of development in the 16th century, had influenced the Ottoman accounts.[1]

The first author to refer to Murad's killer by his full name is Konstantin Mihailović, a Serbian Janissary from the village of Ostrovica, who wrote his Memoirs of a Janissary or Turkish Chronicle in ca 1497. In a passage intended to infer a moral lesson about disloyalty from the Serbian defeat at Kosovo, Mihailović identifies Miloš Kobilac as the knight who on the fateful last Friday of the battle slew Murad.[1] The next time a name is given in the sources is three decades later, in 1530, when the (Slovene) monk Benedikt Kuripešić (Curipeschitz) wrote memoirs of his travels through the Balkan Peninsula. His visit to Murad's tomb in Kosovo Polje provides the occasion for the story of the knight whom he names Miloš Kobilović.[1] Kuripešić elaborates on the humiliation and fall out favour which Miloš endured before the battle, his last dinner with Lazar and his nobles, his admittance to Murad's tent, the brutal murder and his own death on attempting to escape on horseback.[1] The monk, though not explicit about his sources, writes that Miloš was a celebrated figure in the popular traditions of Croats and "others in those regions", who sing about his heroic exploits on the border.[1]

According to the most popular version of the legend, during the first Battle of Kosovo, Miloš made his way into the Ottoman camp pretending that he wanted to surrender, and at an opportune moment forced his way into the Sultan's tent and stabbed him to death. Obilić was consequently "slashed to pieces" by the Sultan's bodyguards.[6]

In Serbian epic poetry and song (e.g. "Radul-bey and Bulgarian King Šišman" and the song "Dušan's Wedding"), Miloš Obilić is often grouped along with other literary creations like Karadjordje, Vuk Karadžić and Njegoš as Serbs of Dinaric origin who distinguished themselves as the great moral and/or intellectual minds of the past in contradistinction to Bulgarian contemporaries, who could claim no such status.[7] In the poem "Obilić Dragon's Son", Miloš is given a mythical ancestry as the son of a dragon to emphasise his superhuman strength on a physical and spiritual level; in this, he joins the ranks of many other heroes of Serbian poetry who fought against Turkish oppression and are claimed to have been descendants of a dragon.[8] 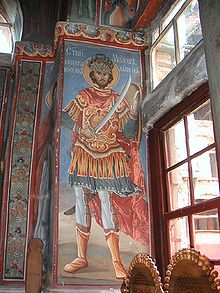 Icon of Miloš Obilić in the Chilandar, depicted as a holy warrior.

It was not until the early 19th century that Miloš was also venerated as a saint in the Serbian Church. During the First Serbian Uprising (1804–1813), a fresco of Miloš as a haloed, sword-bearing saint was painted in Prince Lazar's narthex in the Hilandar Monastery on Mount Athos (Greece).[1] The historian Rade Mihaljcic suggests that the cult was a popular movement which originated among the Serbs south of the Sava and Danube during the Ottoman period.[1]

Later in the same century, the heroic figure of Miloš was given a national boost in the epic poem The Mountain Wreath (1847) by Petar Petrovic Njegoš, prince of Montenegro. The poem praises the assassin's valour in battle, calling him "the victim of a noble feeling, / An all powerful military genius, / A dreadful thunder that smashes crowns".[1]

The prince-poet also instituted the Obilić medal for courage.

This event and the Kosovo battle itself is deeply embedded in the Serbs' national consciousness, history, and poetry.

In the late 1980s, religious nationalists began to breathe further life into the figure of Miloš and the Kosovo myth. Special inspiration was taken from Njegoš's The Mountain Wreath, with its portrayal of Lazar as a Christ-like martyr and Miloš as the Serb sacrificing himself to prove his loyalty and seek retribution.[9] The construction of a national mythology enabled them not only to reinforce a sense of Serb cultural identity but also to represent the contemporary Serb-Muslim conflict in terms of a long-standing enmity with "the Christ-killer" and "the race-traitor".[10] A key event which gave expression to this idea was the 600th anniversary of the Battle of Kosovo (Vidovdan) on 28 June 1989, which was held at the Gazimestan plain, near the site of the battle.[11] Milos' feat has been cited as a source of inspiration in public speeches by political leaders, notably President Milošević, who referred to him in his Gazimestan speech on the occasion of the battle anniversary.[12]

Religious nationalist use of the Miloš/Kosovo legend culminated in attempts to encourage and justify aggression against Bosnian Muslims, notably the Bosnian genocide of the early nineties.[13] During the atrocities of the time, nationalists supporting the Republika Srpska cited hostile verses from The Mountain Wreath and other epics, and medals with Milos’ name were awarded to soldiers who had taken part in the genocide.[14] Concerning the cultural extent of this religious nationalist ideology, Michael Sells writes that it:

operated not only in speeches and manifestos, but in specific rituals of atrocity. Survivors of concentration camps report that during torture sessions or when they begged for water, they were made to sing Serbian religious nationalist songs, reworded to reflect the contemporary conflict.

One such song was directed at Alija Izetbegović, in which the first-person speaker would boast that he will slay the president just as Miloš slew the sultan.[15]