The Kybalion: Hermetic Philosophy is a 1908 book claiming to be the essence of the teachings of Hermes Trismegistus, published anonymously by a group or person under the pseudonym of "the Three Initiates". 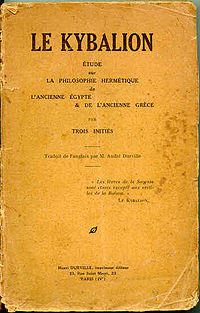 The French cover of the book.

The Kybalion was first published in 1908 by the Yogi Publication Society and is now in the public domain, and can be found on the internet. The book purports to be based upon ancient Hermeticism, though many of its ideas are relatively modern concepts arising from the New Thought movement. The book itself early in reading makes the claim that it makes its appearance in one's life when the time is appropriate and includes variations of material found in the book of Proverbs.

Mental Transmutation (also described as Mental Alchemy, the Art of Mental Chemistry, and the Art of Polarization) refers to the art of changing and transforming one's own mental states and conditions, as well as influencing those of others. It is also called a form of "Mystic Psychology" [1].

The book devotes a chapter to each of its seven "Principles", or axioms:

The Principle of Mentalism embodies the truth that "All is Mind."

The Principle of Vibration embodies the idea that motion is manifest in everything in the Universe, that nothing rests, and everything moves, vibrates, and circles.[3] This principle explains that the differences between different manifestations of Matter, Energy, Mind, and even Spirit, are the result of only different "vibrations".[4] The higher a person is on the scale, the higher the rate of vibration will be. Here, The All is purported to be at an infinite level of vibration, almost to the point of being at rest. There are said to be millions upon millions of varying degrees between the highest level, The All, and the objects of the lowest vibration.[5]

Mental Transmutation is described as the practical application of this principle. To change one's mental state is to change vibration. One may do this by an effort of Will, by means of deliberately "fixing the attention" upon a more desirable state.[6]

The Principle of Polarity embodies the idea that everything is dual, everything has two poles, and everything has its opposite.[7] All manifested things have two sides, two aspects, or two poles.[8] Everything "is" and "isn't" at the same time, all truths are but half truths and every truth is half false, there are two sides to everything, opposites are identical in nature, yet different in degree, extremes meet, and all paradoxes may be reconciled.[9]

The Principle of Rhythm embodies the idea that in everything there is manifested a measured motion, a to and fro, a flow and inflow, a swing backward and forward, a pendulum-like movement.[10] This principle explains that there is rhythm between every pair of opposites, or poles, and is closely related to the Principle of Polarity.[11] It can be seen that this Principle enables transition from one pole to the other, and not necessarily poles of extreme opposites.

Principle of Cause and Effect

The Principle of Cause and Effect explains that there is a cause for every effect, and an effect for every cause.[12] It also states that there is no such thing as chance, that chance is merely a term indicating extant causes not recognized or perceived.[13] The Principle is clarified in the chapter Causation.

The Principle of Gender embodies the idea that gender is manifested in everything.[14] The authors state that this does not relate explicitly to the commonly understood notion of sex, but rather "... to beget; to procreate, to generate, to create, or to produce..." in general.[15] Gender is manifested as the Masculine and Feminine principles, and manifests itself on all planes.

Mental Gender is described as a Hermetic concept which relates to the masculine and feminine principles. It does not refer to the physical gender of someone, nor does it suggest that someone of a certain physical gender necessarily has the same mental gender. Ideally, one wants to have a balanced mental gender.[16]

The concept put forth in The Kybalion states that gender exists on all planes of existence (Physical, Mental, and Spiritual), and represents different aspects on different planes. It is also stated that everything and everyone contains these two elements or principles.[17]

The Masculine principle is always in the direction of giving out or expressing, and contents itself with the "Will" in its varied phases.[18]

The Feminine principle is always in the direction of receiving impressions, and has a much more varied field of operation than the Masculine. The Feminine conducts the work of generating new thoughts , concepts, and ideas, including the work of the imagination.[19]

The "Three Initiates" who authored The Kybalion chose to remain anonymous. As a result, a great deal of speculation has been made about who actually wrote the book.

The most common proposal is that The Kybalion was authored by William Walker Atkinson, either alone or with others, such as Paul Foster Case and Elias Gewurz. Atkinson was known to use many pseudonyms, and to self-publish his works.

Also suggestive is the fact that, among his earliest published pseudonymous and anonymous works may have been a series entitled The Arcane Teachings, which bears many superficial similarities to The Kybalion — The Kybalion explores seven "Hermetic Principles" while The Arcane Teachings examines seven "Arcane Laws", The Kybalion claims to be an elucidation of an ancient, unpublished Hermetic text of the same name, while The Arcane Teachings claims to reveal the wisdom of an ancient, unpublished scroll of occult aphorisms, and both books describe three "Great Planes" of reality which are further subdivided into seven lesser planes. Both books also describe three of the lesser planes as "astral black keys" analogous to the black keys on a piano, and inhabited by elemental spirits. And, both books describe the process of "Mental Alchemy" in great detail, and in nearly complete agreement with each other. There are other similarities, and The Arcane Teachings might have been Atkinson's "first draft" of material which later became The Kybalion. Atkinson also attempted to describe the workings of the universe in terms of a set of laws in 1918's The Secret Doctrine of the Rosicrucians and his last manuscript The Seven Cosmic Laws, written in 1931 and published posthumously in 2011.

A common theory is that Atkinson co-wrote the book with Paul Foster Case and Michael Whitty. This theory is often held by members of Builders of the Adytum, the Mystery School later founded by Case, though the group doesn't publicly make this claim itself. In fact, this story appears to have originated with a B.O.T.A. splinter group, the Fraternity of Hidden Light.[21]

Along these lines, much has been made about the fact that Paul Foster Case was a Freemason, and that The Kybalion's publisher, the Yogi Publication Society, gave its address as "Masonic Temple, Chicago IL" in the book's frontispiece. However, Chicago's "Masonic Temple" was also the city's first skyscraper, housing dozens of stores and small businesses without any Masonic affiliations, and named for the Masonic Lodge which financed much of its construction and met in its top few floors.[22]

Other names speculatively mentioned as co-authors of The Kybalion include Harriet Case (Paul Foster Case's wife at the time), Mabel Collins (a prominent Theosophical writer), Claude Bragdon (an architect, Theosophist, and writer on "mystic geometry"), and Claude Alexander (a well-known stage magician, mentalist, proponent of crystal gazing, and New Thought author). Ann Davies, who succeeded Paul Foster Case as head of the B.O.T.A., is often mentioned as a possible Kybalion contributor, but she was born in 1912-- four years after the book's first publication.

The works of the English philosopher Herbert Spencer are referred to approvingly in The Kybalion as showing an understanding of Hermetic Principles; and Spencer himself is eulogised as a reincarnation of the 5th Century BCE Greek philosopher Heraclitus or Hermes; who is in turn described as being a reincarnation of a still more ancient, Egyptian philosopher: No other writers are similarly referenced or endorsed within the text.

Doreen Virtue, Ph.D wrote a book called Divine Magic: The Seven Sacred Secrets of Manifestation (A New Interpretation of the Classic Hermetic Manual The Kybalion), in 2006, presenting a modern version of The Kybalion with companion "meditative" CD. In her view, one can learn to master one's moods, release negativity, manifest "higher levels of abundance", and attract new opportunities into one's life with the aid of the teachings of The Kybalion.

Another loosely derivative work has emerged from an esoteric organization by the name of Summum which, considering The Kybalion to be antiquated and incomplete, rewrote the text to incorporate a "grand principle", their Principle of Creation. Summum describes this as the foundation underlying the existence of The All, and the source from which the seven Principles emanate.

A few organizations consider The Kybalion an essential foundation of their beliefs, and have translated the original text into many languages. Ultimately, The Kybalion itself claims to have influenced all major religions and philosophies ancient and modern alike.[24]