He first appears in the Book of Daniel, delivering explanations of Daniel's visions. In the Gospel of Luke Gabriel foretells the births of both John the Baptist and of Jesus. Christians of the Catholic traditions refer to him as Gabriel the Archangel.

In Islam, Gabriel was the medium through whom God revealed the Qur'an to Muhammad, and that he sent a message to most prophets, if not all, revealing their obligations. He is called the chief of the four favoured angels and the spirit of truth. He is called the created Holy Spirit (Islam) that spoke to Muhammad,[1][2] which is not to be confused with the Holy Spirit of God in Christianity who is revered as God Himself. Gabriel is also mentioned in Bahá'í Faith texts, specifically in Bahá'u'lláh's mystical work Seven Valleys.

Gabriel is referred to as "he" in the Bible, and in Daniel 9:21 he is explicitly called "the man Gabriel". Some moderns, especially New Age exponents, portray Gabriel as female or androgynous.[3][4][5] 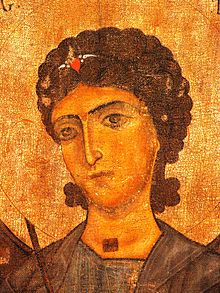 First, concerning John the Baptist, an angel appeared to his father Zacharias, a priest of the course of Abia,[Luke 1:5] whose "barren" wife Elisabeth was of the daughters of Aaron, while he ministered in the temple:

Luke 1:10 And the whole multitude of the people were praying without at the time of incense.
11 And there appeared unto him an angel of the Lord standing on the right side of the altar of incense.
12 And when Zacharias saw him, he was troubled, and fear fell upon him.
13 But the angel said unto him, Fear not, Zacharias: for thy prayer is heard; and thy wife Elisabeth shall bear thee a son, and thou shalt call his name John.
14 And thou shalt have joy and gladness; and many shall rejoice at his birth.
15 For he shall be great in the sight of the Lord, and shall drink neither wine nor strong drink; and he shall be filled with the Holy Ghost, even from his mother’s womb.
16 And many of the children of Israel shall he turn to the Lord their God.
17 And he shall go before him in the spirit and power of Elias, to turn the hearts of the fathers to the children, and the disobedient to the wisdom of the just; to make ready a people prepared for the Lord.
18 And Zacharias said unto the angel, Whereby shall I know this? for I am an old man, and my wife well stricken in years.
19 And the angel answering said unto him, I am Gabriel, that stand in the presence of God; and am sent to speak unto thee, and to shew thee these glad tidings.
20 And, behold, thou shalt be dumb, and not able to speak, until the day that these things shall be performed, because thou believest not my words, which shall be fulfilled in their season.
Luke 1:10-20 KJV (other versions: Luke 1:1-25)

After completing his week[6] of ministry, Zacharias returned to his house (in Hebron)[7] and his wife Elizabeth conceived. After she completed "five months" (Luke 1:21-25) of her pregnancy, Gabriel is mentioned again:

Luke 1:26 ¶ And in the sixth month the angel Gabriel was sent from God unto a city of Galilee, named Nazareth,
27 To a virgin espoused to a man whose name was Joseph, of the house of David; and the virgin’s name was Mary.
28 And the angel came in unto her, and said, Hail, thou that art highly favoured, the Lord is with thee: blessed art thou among women.
29 And when she saw him, she was troubled at his saying, and cast in her mind what manner of salutation this should be.
30 And the angel said unto her, Fear not, Mary: for thou hast found favour with God.
31 And, behold, thou shalt conceive in thy womb, and bring forth a son, and shalt call his name JESUS.
32 He shall be great, and shall be called the Son of the Highest: and the Lord God shall give unto him the throne of his father David:
33 And he shall reign over the house of Jacob for ever; and of his kingdom there shall be no end.
34 Then said Mary unto the angel, How shall this be, seeing I know not a man?
35 And the angel answered and said unto her, The Holy Ghost shall come upon thee, and the power of the Highest shall overshadow thee: therefore also that holy thing which shall be born of thee shall be called the Son of God.
36 And, behold, thy cousin Elisabeth, she hath also conceived a son in her old age: and this is the sixth month with her, who was called barren.
37 For with God nothing shall be impossible.
38 And Mary said, Behold the handmaid of the Lord; be it unto me according to thy word. And the angel departed from her.
Luke 1:26-38 KJV (other versions: Luke 1:26-38)

Gabriel only appears by name in those two passages in Luke. In the first passage the angel identified himself as Gabriel, but in the second it is Luke who identified him as Gabriel. The only other named angel in the New Testament is "Michael the archangel" in Jude 1:9. Gabriel is not called an archangel in the Bible. Believers are expressly warned not to worship angels in Colossians 2:18-19 and Revelation 19:10.[8]

According to the non-canonical Enoch 9:1–2, Gabriel, along with Michael, Raphael, Uriel and Suriel hear the cries of humanity under the strain of the Nephilim. It was their beseeching of "the Ancient of Days" (Yahweh), that prompted God to call Enoch to prophethood.

After Enoch informed the Watchers of their fall from grace, Yahweh sent the archangels to earth to complete various tasks. In Enoch 10:13, Gabriel was to "Go to the biters, to the reprobates, to the children of fornication, the offspring of the Watchers, from among men; bring them forth and excite them against one another. Let them perish under mutual slaughter; for length of days shall not be theirs." And so, Gabriel instigated wars among the Giants (the children of the Watchers).

In English-speaking culture, the image of Gabriel as the angel that shall blow the trumpet blast that initiates the end of time and the general resurrection at the Last Judgment, which has no source in the Hebrew Bible or the New Testament,[9] is a familiar trope. (It may be taken from Norse Heimdall who according to legends, will sound the Gjallarhorn, alerting the Æsir to the onset of Ragnarök where the world ends and is reborn.) It may also be taken from Mother Shipton's Prophecies "For storms will rage and oceans roar, when Gabriel stands on sea and shore, and as he blows his wondrous horn, old worlds die and new be born." It ranges from its first appearance in English in John Milton's Paradise Lost (1667)[10] to African-American spirituals: in Marc Connelly's play based on spirituals, The Green Pastures (1930), Gabriel has his beloved trumpet constantly with him, and the Lord has to warn him not to blow it too soon.[11] Four years later "Blow, Gabriel, Blow" was introduced by Ethel Merman in Cole Porter's Anything Goes (1934). The mathematical figure given the modern name "Gabriel's Horn", was invented by Evangelista Torricelli (1608–1647); it is a paradoxical solid of revolution that has infinite surface area, but finite volume.

In Islamic tradition, though not specified in the Qur'an, the trumpeter sounding the trump of doom[12] is not Gabriel, but Israfel.

The earliest identification of Gabriel as the trumpeter that S. Vernon McCasland was able to trace was in an Armenian illuminated manuscript dated 1455, at the Walters Art Museum, Baltimore.[13] 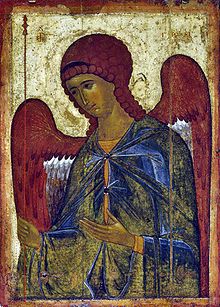 The feast of Saint Gabriel was included for the first time in the General Roman Calendar in 1921, for celebration on March 24. In 1969 it was transferred to 29 September for celebration together with St. Michael and St. Raphael.[14] The Church of England has also adopted the 29 September date, known as Michaelmas.

The Eastern Orthodox Church and those Eastern Catholic Churches which follow the Byzantine Rite celebrate his feast day on 8 November (for those churches that follow the traditional Julian Calendar, 8 November currently falls on 21 November of the modern Gregorian Calendar, a difference of 13 days). Eastern Orthodox commemorate him, not only on his November feast, but also on two other days: 26 March is the "Synaxis of the Archangel Gabriel" and celebrates his role in the Annunciation. 13 July is also known as the "Synaxis of the Archangel Gabriel", and celebrates all the appearances and miracles attributed to Gabriel throughout history. The feast was first established on Mount Athos when, in the ninth century, during the reign of Emperor Basil II and the Empress Constantina Porphyrogenitus, while Nicholas II Chrysoberges|Nicholas Chrysoverges was Patriarch of Constantinople, the Archangel appeared in a cell near Karyes, where he wrote with his finger on a stone tablet the hymn to the Theotokos, "It is truly meet..." (see Axion Estin).[15]

The Ethiopian Church celebrates his feast on 28 December, with a sizeable number of its believers making a pilgrimage to a church dedicated to "Saint Gabriel" in Kulubi on that day.[16]

Additionally Gabriel is the patron saint of messengers, those who work for broadcasting and telecommunications such as radio and television, remote sensing, and postal workers.

Gabriel (Jibra'il) is believed by Muslims to have been the angel who revealed the Qur'an to the prophet Muhammad. Gabriel is named numerous times in the Qur'an (II: 97, 98; LXVI: 4); and, in II: 97, the Qur'an expressly narrates:

"Who is an enemy to Gabriel! For he it is who hath revealed (this scripture) to thy heart by God's leave, confirming that which was (revealed) before it, and a guidance and glad tidings to believers."

Gabriel makes a famous appearance in the Hadith of Gabriel, where he quizzes the Prophet Muhammad on the core tenets of Islam.

In Muslim tradition, Gabriel occupies the role of one of the primary archangels and all historical commentaries build upon Gabriel's role as the transmitter of the Qur'an.[17] Exegesis narrates that Muhammad saw Gabriel in his full angelic splendor only twice, the first being when he received his first revelation.[18] Muslims also revere Gabriel for a number of historical events predating the first revelation. Muslims believe that Gabriel was the angel who informed Zachariah of John's birth as well as Mary of the future birth of Jesus[19]and that Gabriel was one of three angels who had earlier informed Abraham of the birth of Isaac.[20] These events of Zachariah and Mary can be found also in the Quran, mentioned in surah Maryam.

Mary 19:2 [This is] a mention of the mercy of your Lord to His servant Zechariah
19:3 When he called to his Lord a private supplication.
19:4 He said, "My Lord, indeed my bones have weakened, and my head has filled with white, and never have I been in my supplication to You, my Lord, unhappy.
19:5 And indeed, I fear the successors after me, and my wife has been barren, so give me from Yourself an heir
19:6 Who will inherit me and inherit from the family of Jacob. And make him, my Lord, pleasing [to You]."
19:7 [He was told], "O Zechariah, indeed We give you good tidings of a boy whose name will be John. We have not assigned to any before [this] name."
19:8 He said, "My Lord, how will I have a boy when my wife has been barren and I have reached extreme old age?"
19:9 [An angel] said, "Thus [it will be]; your Lord says, 'It is easy for Me, for I created you before, while you were nothing.' "
19:10 [Zechariah] said, "My Lord, make for me a sign." He said, "Your sign is that you will not speak to the people for three nights, [being] sound."

When the angel Gabriel appeared to Mary: 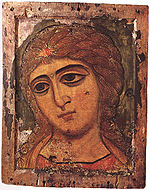 In chronological order (to see each item, follow the link in the footnote):[21]

Galleries of Gabriel in art

Statues or Icons of Gabriel