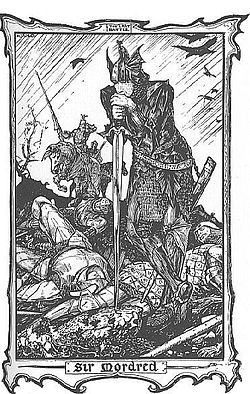 Mordred or Modred (/ˈmoʊdrɛd/; Welsh: Medraut, Medrod, etc.) is a character in the Arthurian legend, known as a notorious traitor who fought King Arthur at the Battle of Camlann, where he was killed and Arthur fatally wounded. Tradition varies on his relationship to Arthur, but he is best known today as Arthur's illegitimate son by his half-sister Morgan le Fay. In earlier literature, he was considered the legitimate son of Morgause, also known as Anna, with her husband King Lot of Orkney. His brothers or half-brothers are Gawain, Agravain, Gaheris, and Gareth. The name (from either Old Welsh Medraut, Cornish Modred, or Old Breton Modrot) is ultimately derived from Latin Moderātus.[1]

Mordred appears very early in Arthurian literature. The first mention of him, as Medraut, occurs in the Annales Cambriae entry for the year 537:[2]

Gueith Camlann in qua Arthur et Medraut corruerunt.
"The strife of Camlann, in which Arthur and Medraut fell."

The Annales themselves were completed between 960 and 970, though their authors drew on older material.[3] Mordred was associated with Camlann even at that early date, but as Leslie Alcock points out, this brief entry gives no information as to whether he killed or was killed by Arthur, or even if he was fighting against him; the reader assumes this in the light of later tradition.[4] But even if he was not the notorious villain he would later become, his appearances in the Welsh Triads and genealogies show he was at least a well known personage.

The earliest full account of Mordred is found in Geoffrey of Monmouth's Historia Regum Britanniae, where he, for the first time in literature, plays the role of traitor to Arthur. Geoffrey introduced the figure of Mordred (whom he calls Modredus) to the world beyond Wales, detailing that Arthur left Mordred in charge of his throne as he crossed the English Channel to wage war on Emperor Lucius of Rome. During Arthur's absence Mordred crowns himself king and marries Guinevere, forcing Arthur to return to Britain. The Battle of Camlann is fought, and Mordred dies while Arthur is taken to Avalon. Arthur's successor, Constantine III of Britain, has to deal with the remainder of Mordred's army, led by his two sons.

A number of Welsh sources also refer to Medraut, usually in relation to Camlann. One triad, based on Geoffrey's Historia, provides an account of his betrayal of Arthur;[5] in another, he is described as the author of one of the "Three Unrestrained Ravagings of the Isle of Britain" – he came to Arthur's court at Kelliwic in Cornwall, devoured all of the food and drink, and even dragged Gwenhwyfar (Guinevere) from her throne and beat her.[6] Medraut is never considered Arthur's son in Welsh texts, only his nephew, though The Dream of Rhonabwy mentions that the king had been his foster father. However, Mordred's later characterization as the king's villainous son has a precedent in the figure of Amr, a son of Arthur's known from only two references. The more important of these, found in an appendix to the Historia Britonum, describes his marvelous grave beside the Herefordshire spring where he had been slain by his own father in some unchronicled tragedy.[7][8] What connection exists between the stories of Amr and Mordred, if there is one, has never been satisfactorily explained.

In Geoffrey and certain other sources such as the Alliterative Morte Arthure, Mordred marries Guinevere, seemingly consensually, after he steals the throne. However, in later writings like the Lancelot-Grail Cycle and Thomas Malory's Le Morte d'Arthur, Guinevere is not treated as a traitor and she flees Mordred's proposal and hides in the Tower of London. Adultery is still tied to her role in these later romances, however, but Mordred has been replaced with Lancelot.

Geoffrey and the Lancelot-Grail Cycle have Mordred being succeeded by his two sons. In Geoffrey, Arthur's successor Constantine tracks them down and kills them in their sanctuaries; in the Lancelot-Grail, the elder son, Melehan, is killed by Bors, while Lancelot slays his brother.

The illegitimacy angle was introduced in the Lancelot-Grail (Vulgate) Cycle, and has been taken up in most subsequent versions. In those versions, the incest is usually accidental; the participants are ignorant of their kinship. In one version Morgause mistakes Arthur for her husband visiting her in the night. In another Arthur rapes his sister, overtaken by lust for her. In any case, the discovery of the incest is usually disastrous; after hearing a prophecy that a child born on May Day, as Mordred was, will destroy him and his kingdom, Arthur rounds up all the noble May Babies and sends them away on a rickety ship. The ship sinks, and the only child to survive is Mordred, who is rescued and eventually returned to his parents.

Virtually everywhere Mordred appears, his name is synonymous with treachery. He appears in Dante's Inferno in the lowest circle of Hell, set apart for traitors: "him who, at one blow, had chest and shadow / shattered by Arthur's hand;"[9] (Canto XXXII).

A few works of the Middle Ages and today, however, portray Mordred as less a traitor and more a conflicted opportunist, or even a victim of fate. The 14th century Scottish chronicler John of Fordun even claimed that Mordred was the rightful heir to the throne of Britain, as Arthur was an illegitimate child (in his account, Mordred was the legitimate son of Lot and Anna.) This sentiment was elaborated upon by Walter Bower and by Hector Boece, who in his Historia Gentis Scotorum goes so far as to say Arthur and Gawain were traitors and villains who stole the throne from Mordred. Even Malory, who depicts Mordred as a villain, notes that the people of England rallied to him because, "with Arthur was none other life but war and strife, and with Sir Mordred was great joy and bliss."

Mordred is especially prominent in popular Arthurian texts of the modern era, especially in fiction, film, and television, and the comics medium.[10] Some modern Arthurian works such as Marion Zimmer Bradley's Mists of Avalon replace Morgause as Mordred's mother with Morgan le Fay (traditionally her sister). Mordred remains a major villain in many modern takes on the legend, including John Boorman's film Excalibur, T.H. White's novel The Once and Future King (where Mordred plays the role of a bitter but successful populist and faux-Bolshevik) and the musical based on it, Camelot, and Hal Foster's popular comic strip Prince Valiant. In the 2008 episode "The Beginning Of The End" of the BBC television series Merlin, a prequel to and re-imagining of the Arthur legends, Mordred appears as a young Druid boy whom Merlin protects despite being warned that he would one day kill Arthur.

In the Chronicles of the Imaginarium Geographica by James A. Owen, Mordred is the main villain. In the third book, the Indigo King, it is revealed that Mordred was born as Madoc in a place called the Archipelago of Dreams, where he was exiled from for trying to use knowledge of the future to shape it. He and his twin, Myrddyn, were sons of Ulysses. Mordred was banished by his brother until he was allowed to come back to fight to become High King, taking on the name Mordred. He fought Myrddyn, who is now Merlin, defeating him but losing to Arthur, Merlin's son and Mordred's nephew.

Other works treat the character differently. The Victorian poet George Augustus Simcox wrote a poem titled Mordred My Master from the perspective of Mordred's dog. Rosemary Sutcliff's portrayal of 'Medraut' in Sword at Sunset is fatalistic but fairly ambiguous, showing him as a product of his mother's hate, inexorably compelled towards his doom. Mary Stewart's The Wicked Day is told from his perspective and portrays him more sympathetically than usual, as a victim of fate and the machinations of his mother, whom Stewart identifies as Morgause, illegitimate daughter of Uther. Elizabeth Wein's The Winter Prince portrays him similarly, as a conflicted young man doomed by his mother's manipulations and his own jealousy of his legitimate half-brother Lleu. In Bernard Cornwell's The Warlord Chronicles, Mordred is the club-footed, legitimate grandson and heir of Uther Pendragon, and Arthur serves as the kingdom's regent during his minority. In Stephen R. Lawhead's Pendragon Cycle, Medraut is even half-Atlantean (as is Myrddin), since Lawhead makes his mother Morgian (here Myrddin's aunt) a refugee from Atlantis. In Vivian Vande Velde's The Book of Mordred, Mordred is portrayed as the protagonist of the story, killing an evil wizard and saving a telepathic girl, her mother, and a witch named Nimue, who was Merlin's student. Similarly, Douglas Clegg's Mordred, Bastard Son portrays the character as not only sympathetic but heroic (he and Lancelot save Guinevere from a murderous plot), and in a new twist, he is Lancelot's lover.