The term distance vector refers to the fact that the protocol manipulates vectors (arrays) of distances to other nodes in the network.

Routers using distance vector protocol do not have knowledge of the entire path to a destination. Instead DV uses two methods:

The methods used to calculate the best path for a network are different between different routing protocols but the fundamental features of distance-vector algorithms are the same across all DV based protocols.

Distance Vector means that Routers are advertised as vector of distance and Direction. Direction is simply next hop address and exit interface and Distance means hop count.

Routers using distance vector protocol do not have knowledge of the entire path to a destination. Instead DV uses two methods:

As the name suggests the DV protocol is based on calculating the direction and distance to any link in a network. The cost of reaching a destination is calculated using various route metrics. RIP uses the hop count of the destination whereas IGRP takes into account other information such as node delay and available bandwidth.

Updates are performed periodically in a distance-vector protocol where all or part of a router's routing table is sent to all its neighbors that are configured to use the same distance-vector routing protocol. RIP supports cross-platform distance vector routing whereas IGRP is a Cisco Systems proprietary distance vector routing protocol. Once a router has this information it is able to amend its own routing table to reflect the changes and then inform its neighbors of the changes. This process has been described as ‘routing by rumor’ because routers are relying on the information they receive from other routers and cannot determine if the information is actually valid and true. There are a number of features which can be used to help with instability and inaccurate routing information.

The Bellman-Ford algorithm does not prevent routing loops from happening and suffers from the count-to-infinity problem. The core of the count-to-infinity problem is that if A tells B that it has a path somewhere, there is no way for B to know if the path has B as a part of it. To see the problem clearly, imagine a subnet connected like as A-B-C-D-E-F, and let the metric between the routers be "number of jumps". Now suppose that A is taken offline. In the vector-update-process B notices that the route to A, which was distance 1, is down - B does not receive the vector update from A. The problem is, B also gets an update from C, and C is still not aware of the fact that A is down - so it tells B that A is only two jumps from C (C to B to A) , which is false. This slowly propagates through the network until it reaches infinity (in which case the algorithm corrects itself, due to the "Relax property" of Bellman-Ford).

RIP uses the Split Horizon with Poison Reverse technique to reduce the chance of forming loops and uses a maximum number of hops to counter the 'count-to-infinity' problem. These measures avoid the formation of routing loops in some, but not all, cases. The addition of a hold time (refusing route updates for a few minutes after a route retraction) avoids loop formation in virtually all cases, but causes a significant increase in convergence times.

More recently, a number of loop-free distance vector protocols have been developed — notable examples are EIGRP, DSDV and Babel. These avoid loop formation in all cases, but suffer from increased complexity, and their deployment has been slowed down by the success of link-state routing protocols such as OSPF. 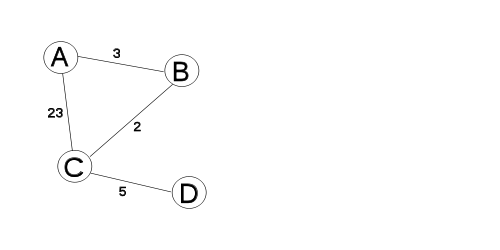