Spree
This article is about the river in Germany. For other uses, see Spree (disambiguation). 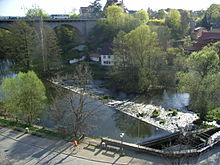 The Spree in Bautzen 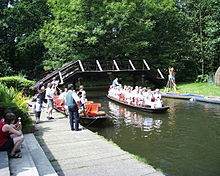 The Spree in the Spreewald 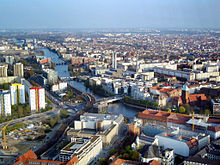 The Spree in central Berlin

The Spree (German pronunciation: [ˈʃpʁeː]; Sorbian: Sprjewja, Czech: Spréva) is a river that flows through the Saxony, Brandenburg and Berlin states of Germany, and in the Ústí nad Labem region of the Czech Republic. It is a left bank tributary of the River Havel and is approximately 400 kilometres (250 mi) in length.

The reach of the river between the Dämeritzsee and Müggelsee to the east of Berlin is known as the Müggelspree.

The source of the Spree is located in the Lusatian Highlands (Lausitzer Bergland) on the Czech border. After leaving the hills, the river passes through the old city of Bautzen/Budyšin, the centre of the Sorbs in Upper Lusatia. Just to the north of Bautzen the river flows through the Bautzen Reservoir. Further north the river passes through the city of Spremberg and the Spremberg Reservoir before reaching the city of Cottbus. To the north of Cottbus the river enters the Spreewald, a large wetlands area in Lower Lusatia.[citation needed]

In the Spreewald the river passes through the towns of Lübbenau, Lübben and Leibsch. Just below Leibsch, the Dahme Flood Relief Canal diverts water from the Spree to run into the River Dahme at Märkisch Buchholz. The Spree continues north from Leibsch before flowing into the Neundorfer See at the northern edge of the Spreewald. From the Neundorfer See it then flows in an easterly direction to the Schwielochsee, and then in a northerly and westerly direction to the town of Fürstenwalde. From Fürstenwalde the river continues to flow westwards, through the Dämeritzsee and Müggelsee, to Köpenick in the southeastern part of Berlin, where it is joined by its tributary, the River Dahme.[1]

The final reach of the Spree is where it is best known. It flows through the city centre of Berlin to join the River Havel in Spandau, one of Berlin’s western boroughs. On its route through Berlin, the river passes Berlin Cathedral (Berliner Dom), the Reichstag and the Schloss Charlottenburg. The renowned Museum Island (Museumsinsel), with its collection of five major museums, is actually an island in the Spree. The Badeschiff is a floating swimming pool moored in the Spree.[1][2]

Very small craft, such as punts, are widely used in wetlands of the Spreewald. Larger craft can reach as far upstream as Leibsch, although the upper reaches are relatively shallow and are generally only used by leisure craft. Some intermediate reaches are unnavigable and by-passed by canals.[1]

In Berlin, the Spree forms part of a dense network of navigable waterways, many of which are artificial, and which provide a wide choice of routes. Several important commercial harbours can be found on this network. Tour boats tour the central section of the Spree and its adjoining waterways on a frequent basis.[1][3]

The name of the river Spree was by Thietmar of Merseburg recorded as Sprewa (Middle German sprejen, sprewen, High German sprühen meaning to spray water). People living at the Spree river (Anwohner) were in old German language (and are still) called Spreewaner.[citation needed]

The river gives its name to several German districts:

Many people died in the Spree while trying to cross the Berlin Wall, including children who drowned with rescuers not allowed to enter to river to save them.