The 2005 World Aquatics Championships or the XI FINA World Championships were held in Montreal, Quebec, Canada from July 16 to July 31, 2005. They took place in Parc Jean-Drapeau on Saint Helen's Island. 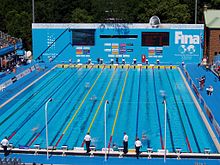 Bidding for and organizing the event

The venue for the games was itself controversial. The games were awarded initially to Montreal, and then taken away again in February 2005 when the city was unable to raise sufficient funding, with other cities indicating their willingness to take the games on. However following promises of funding from various levels of government, Montreal re-bid for the games and they were re-awarded to the city.

On July 16, before the start of the 2005 event, FINA selected the host city for the 2009 World Aquatics Championships — Rome, Italy.