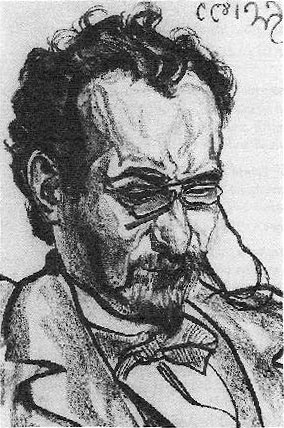 Antoni Lange ( - ) was a Polish , philosopher, polyglot (15 languages), , , science-writer, and . A representative of Polish and symbolism, he is also regarded as belonging to the . He was an expert on , and a popularizer of culture of Eastern cultures. He is famous for his novel "Miranda".

He translated English, French, Hungarian, Italian, Spanish, n, American, Serbian, ian and Oriental writers into Polish and Polish poets into French and English. He was also one of the most original poets of the movement. His work is often compared to [A. Hutnikiewicz, Młoda Polska, Warszawa 2004, p. 316] and .

Lange was an uncle of the poet .

Little is known about Lange's personal life, even the date of his birth is doubtful. He was born into a strongly patriotic Jewish family who were influenced by the ideals of Romanticism. His father Henri Lange took part in the . Young Antoni studied at but he was expelled for his patriotic activity by the Tsarist Russian authorities who ruled Poland at the time. For this reason he decided to study in Paris where he encountered new trends in literature, philosophy and art. In France he became familiar with the theories of , as well as Spiritualism, , the philosophy of and , oriental religions, European and Eastern literature and modern . He took part in the literary meetings of .

He soon returned to his homeland, having become a , and he became one of the best known members of Polish Bohemian life. , and Lange were the first Polish s. In the 1890s he lived in together with , a Polish writer and the winner of the of 1924. Stanisław Brzozowski called Lange "a real and not frequently European mind" [S. Brzozowski "The Legend of Young Poland" (Legenda Młodej Polski): http://univ.gda.pl/~literat/legenda/012.htm] and called him "a master of reflective poetry" [Note from "Władca czasu" (The Master of Time), edited by Julian Tuwim, Warsaw 1983] . During this time Lange was a member of the Polish Academy of Literature. However, with the sharp growth of his popularity as a poet his poems became more sceptical, pessimistic and hermetic. The main theme of the poems of this period was the feeling of being isolated and misunderstood by the crowd.

In Lange's cosmogony-philosophy, he announced that evolution of the soul is parallel to evolution of a nation. Capitalism is the enemy of this principle because it acts against individualism, so capitalism is the ideology of the anonymous crowd. If there is no individualism among the people, then there is also not a problem of "bad" versus "good". Then the world comes to disturb its own logic. According to Lange, a world that 'was being born' from ideal space, is still coming to the highest stage of evolution; sometime, it will return to its primary stage. Every step to evolution is a step to the ideal primary. An exception of this "rule of time-line" is the person of genius, who is between the times. In Lange's philosophy he referred to and .

Lange was interested in and to contain his own philosophy.

An important part of Lange's writing was the criticism of legacy of in modern poetry. In 1924 he founded "Astrea", a science-magazine and the first forum about the Polish and European romanticism. Lange rejected romantic illumination and brainwave. In his view theological truth is within the reach only of , intellect and afterthought. Lange criticized also the importance of and the authorial personality. Placing the poem as an artwork at the center, as an "" of poetry, he affirmed the "poem's own existence" and a "clear idea of creation", therefore he disagreed with the cult of individualism.

Lange's original literary speculations were collected in books such as "Rzuty" ("Projections"), "O poezji współczesnej" ("On Contemporary Poetry") and "Studia i wrażenia" ("Studies and Impressions").

* "Vox Posthuma" - a philosophical treatise about an archetypical "enfant du siècle"
* "Godzina" ("The Hour") - an occult novel about the connections between the ideal and the material world, estheticism in poetry and real life etc.
* "Pogrzeb Shelleya" ("The Funeral of Shelley") - an to
* "Księgi proroków" ("Books of the Prophets") - a collection of cosmogonical poetry referred to , and
* "Exotica" - an historiosophical poem about the "genesis" of the world, God, Man and Woman
* "Pogrobowcy" ("Posthumous Verses") - a collection of early poems strongly influenced by
* "Rozmyślania" ("Contemplations" or "Thoughts") - a philosophical poem about the , strongly influenced by , poetry and
* "Ballady pijackie" ("Drunken Ballads") - a lyrical essay about the drugs and alcohol enjoyed by decadent poets
* "Stypa" ("Meeting") - a about the suicide of young man after a tragic love affair
* "Widzenie świętej Katarzyny" ("The Vision of Saint Catherine of Alexandria") - a lyrical story about the social and metaphysical consequences of the
thumb|left|225x|">
* "W czwartym wymiarze" ("In the Fourth Dimension") - one of the first books in Polish literature
* "Miranda" - an occult novel about tragic love and the vision of an ideal woman in an ideal civilisation of s
* "Róża polna" ("The Wild Rose")
* "Atylla" ("Attila")
* "Malczewski" - a play about the life of the Polish Romantic poet
* "" - a cycle of 11 philosophical poems about an ideal vision of love, pain and loneliness
* "Pieśni dla przyjaciół" ("Odes to Friends") - a collection of odes to Polish poets such as and