The Mon (Mon: မောန် or မည်; Burmese: မွန်လူမျိုး‌; [mʊ̀ɴ lù mjó]; Thai: มอญ, Khmer:មន) are an ethnic group from Burma (Myanmar), living mostly in Mon State, Bago Division, the Irrawaddy Delta, and along the southern Thai–Burmese border. One of the earliest peoples to reside in Southeast Asia, the Mon were responsible for the spread of Theravada Buddhism in Burma and Thailand. The Mon culture is credited as a major source of influence on the dominant Burmese culture.

As the eastern Mon were absorbed into the Thai society long ago, the western Mon of Burma have largely assimilated into Burmese society. In Burma, the Mon are fighting to preserve the Mon language and culture, and regain a greater degree of political autonomy. The Mon of Burma are divided into three sub-groups based on their ancestral region in Lower Burma: the Man Nya (မန်ည) from Pathein (the Irrawaddy delta) in the west, the Man Duin (မန်ဒိုၚ်): Bago in the central region, and the Man Da (မန်ဒ): Mottama in the southeast.[1] Once the predominant ethno-linguistic group in Lower Burma, speakers of the Mon language number fewer than one million today,[citation needed] and those of Mon descent number anywhere between two million and eight million.[citation needed] The majority of Mon are monolingual in the Burmese language, and are counted as members of the majority Bamar (Burmans). Recent studies have suggested evidence indicating that the Mon and Bamar share a common genetic ancestry. A genetic study done on Mon and Bamar showed a high prevalence of a particular glucose-6-phosphate dehydrogenase (G6PD) mutation not found among Khmers, Laotians and Thais.[2]

The Mons were believed to be one of the earliest people of continental Southeast Asia. They hosted earliest Southeast Asian civilizations including the Dvaravati in Central Thailand (whose culture proliferated into Isan) and the Kingdom of Thaton. They were the first receivers of Theravada missionaries from Sri Lanka, in contrast to their Hindu contemporaries like the Khmers or Chams. The Mons adopted the Pallava script and the oldest Mon script was found in a cave in modern Saraburi dating around 550 AD. Though no remains were found belonging to the Thaton kingdom but it was mentioned widely in Burmese and Lanna chronicles. The legendary Queen Jamadevi from the Chao Phraya Valley came to rule as the first queen of Haribhunjyaya (modern Lamphun) kingdom around 800 AD.

After 1000 AD onwards the Mons were under constant pressures. With the Tai migrations from the north and Khmer invasions from the east, the Mons of Dvaravati perished and gave their way to Khmer Lavo kingdom by around 1000 AD. (The surviving group of Dvaravati Mon people known as Nyah Kur still lives in Isan as a very small minority today.) The Mons were killed in wars, transported as captives, or assimilated into new cultures. The Mon as an entity virtually disappeared in Chao Phraya Valley. However, Haribhunjaya kingdom survived as a Mon outpost in northern Thailand under repeated harass by the Tai Yuan.

In 1057, King Anawrahta of Pagan conquered the Thaton kingdom. The Mon culture and script were readily absorbed by the Burmese and the Mons, for the first time, came under Burmese rule. The Mons remained a majority in Lower Burma.

The Haribhunjaya kingdom prospered in the reign of King Aditayaraj (around early twelfth century) who allegedly waged wars with Suryavarman II of Angkor and constructed the dhatu of Haribhunjaya. In 1230 AD, Mangrai the Tai Yuan chief conquered the Haribhunjaya kingdom and again the Mon culture was integrated into the Lanna culture. The Lanna adopted the Mon script and religion (later replaced by Sri Lankan Buddhism).

In 1287, the Pagan Kingdom collapsed, leaving the power vacuum. A Tai chief from Sukhothai named Wareru established himself in Martaban and was proclaimed king by the Mons. The base was later moved to Pegu. The Kingdom of Martaban-Pegu (1287–1539) was the prospering period of the Mons in both power and culture. The Mons were consolidated under King Razadarit (1383–1422) who successfully fended off Burmese invasions by the northern Kingdom of Ava. The reigns of Queen Shin Sawbu (1453–1472) and King Dhammazedi (1472–1492) were the time of peace and prosperity.

The Burmese, however, regained their momentum at Toungoo in the early sixteenth century. The Mon kingdom then fell to the invasion of King Tabinshweti of Toungoo in 1539. After the death of the king, the Mons temporarily freed from Burmese rule led by Smim Htaw but they were defeated by King Bayinnaung in 1551. The Burmese moved their capital to Pegu, keeping the Mons intact with the royal authority. For next two hundred years the Mons of Lower Burma came under Burmese rule.

Lower Burma became effectively war fronts between Burma, Siam, and Arakan. Following King Naresuan’s campaigns against the Burmese, the Mons were, either forced or voluntarily, moved to Siam. The collapse of Mon power propagated waves of migration into Siam, were they were permitted to live in the city of Ayutdhaya. A Mon monk became a chief advisor to King Naresuan.

Pegu was plundered by the Arakanese in 1599. The Burmese authority collapsed and the Mons loosely established themselves around Martaban. Only with the unification by King Anaukpetlun that the Mons again fell under the rule of the Burmese in 1616. The Mons rebelled again in 1661 but the rebellion was put down by King Pye. The Mon refugees were granted to live around western Siam the Burmese-Siamese borders by the Siamese king. The Mons then played a major role in Siamese military and politics. A special regiment was created for the Mons serving the Siamese king.

The Burmese power declined rapidly in the early eighteenth century. Finally, the Mons rebelled at Pegu in 1740 with the help of the Gwe Shans. A Burman monk with Toungoo royal lineage was proclaimed King of Pegu and was later succeeded by Binnya Dala in 1747. With the French support, the Mons were able to establish an independent kingdom for 17 years before falling to Alaungpaya in 1757. This time the Burmese rule was harsh. The Mons were largely massacred encouraging a large migration to Siam and Lanna.

The Mons rebelled at Dagon in the reign of Hsinbyushin of Konbaung dynasty and the city was razed to the ground. Again in 1814 the Mons rebelled and were as harshly as before put down. These rebellions generated a huge wave of migrations that the child Prince Mongkut proceeded to welcome the Mons himself. The Mons in Siam were settled in two areas – Pak Kred in Nonthaburi and Phra Pradaeng in Samut Prakarn. Other minor Mon settlements were found throughout Central Thailand. Over time, the Mons were effectively integrated into Siamese society and culture.

The 61st Anniversary of Mon National Day in London

Burma was conquered by the British in a series of wars. After the Second Anglo-Burmese War, the Mon territories were completely under the control of the British. The Mon aided the British to free themselves from the rule of the Burman monarchy. Under Burman rule, the Mon people had been massacred after they lost their kingdom and many sought asylum in the Thai Kingdom. The British conquest of Burma allowed the Mon people to survive in Southern Burma.

The Mon soon became anti-colonialists and following the grant of independence to Burma in 1948 they sought self-determination, U Nu refused them this and they rose in revolt to be crushed again.

They have remained a repressed and defiant group in the country since then. They have risen in revolt against the central Burmese government on a number of occasions, initially under the Mon People's Front and from 1962 through the New Mon State Party. A partially autonomous Mon state, Monland, was created in 1974 covering Tenasserim, Pegu and Ayeyarwady River. Resistance continued until 1995 when NMSP and SLORC agreed a cease-fire and, in 1996, the Mon Unity League was founded.

In 1947, Mon National Day was created to celebrate the ancient founding of Hanthawady, the last Mon Kingdom, which had its seat in Pegu. (It follows the full moon on the 11th month of the Mon lunar calendar, except in Phrapadaeng, Thailand, where it is celebrated at Songkran.)

The largest Mon refugee communities are currently in Thailand, with smaller communities in the United States (the largest community being in Fort Wayne, Indiana and the second largest being Akron, Ohio), Australia, Canada, Norway, Denmark, Finland, Sweden, and the Netherlands.

The Mon language is part of the Monic group of the Mon–Khmer branch of the Austro-Asiatic family, closely related to the Nyah Kur language and more distantly related to Khmer. The writing system is Indic based. The Burmans adapted the Mon script for Burmese following their conquest of Mon territory during Anawrahta's reign. 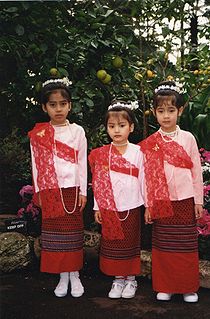 Members of the young generation in full traditional costume

Mon culture and traditional heritages includes spiritual dances, musical instruments such as crocodile xylophone, harp, and flat guitar. Mon dances are usually played in a formal theater or sometimes in an informal district of any village. The dances are followed by background music using a circular set of tuned drums and claps, crocodile xylophone, gongs, flute, flat guitar, harp, etc. Mon in Burma wear clothes similar to the Bamars. Those living in Thailand have adopted Thai style scarfs and skirts.

The symbol of the Mon people is Hintha, a mythological duck, which is also the state symbol of Bago Region and Mon State, two historical Mon strongholds.