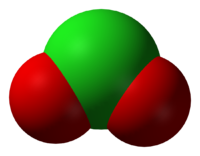 The chlorite ion is ClO2−. A chlorite (compound) is a compound that contains this group, with chlorine in oxidation state +3. Chlorites are also known as salts of chlorous acid.

Chlorine can assume oxidation states of −1, +1, +3, +5, or +7 within the corresponding anions Cl−, ClO−, ClO2−, ClO3−, or ClO4−, known commonly and respectively as chloride, hypochlorite, chlorite, chlorate, and perchlorate. An additional oxidation state of +4 is seen in the neutral compound chlorine dioxide ClO2, which has the same structure as chlorite ClO2− and the cation chloryl (ClO2+).

The free acid, chlorous acid, HClO2, is only stable at low concentrations. Since it cannot be concentrated, it is not a commercial product. However, the corresponding sodium salt, sodium chlorite, NaClO2 is stable and inexpensive enough to be commercially available. The corresponding salts of heavy metals (Ag+, Hg+, Tl+, Pb2+, and also Cu2+ and NH4+) decompose explosively with heat or shock.

(Other routes for the preparation of chlorine dioxide are available depending on the initial salt).

The chlorine dioxide is then absorbed into an alkaline solution and reduced with hydrogen peroxide, H2O2 yielding sodium chlorite (NaClO2). (Sodium, Na+, spectator ions are not shown in the following equations).

The main application of sodium chlorite is the generation of chlorine dioxide for bleaching and stripping of textiles, pulp, and paper. It is also used for disinfection in a few municipal water treatment plants after conversion to chlorine dioxide. An advantage in this application, as compared to the more commonly used chlorine, is that trihalomethanes are not produced from organic contaminants. In the European Union however, the use of Sodium chlorite has been phased out by 24-10-2009 for use as certain types of biocides: Product-type(PT) 2: Private area and public health area disinfectants and other biocidal products, PT 3: Veterinary hygiene biocidal products, PT 4: Food and feed area disinfectants and PT 5: Drinking water disinfectants.[1] Since September 2006, its application as molluscicide (PT 16) is forbidden as well. Sodium chlorite, NaClO2 also finds application as a component of contact lens cleaning solution under the trade name purite.

Health related information: see sodium chlorite. Sodium chlorite, like many oxidizers, should be protected from inadvertent contamination by organic materials to avoid the formation of an explosive mixture.