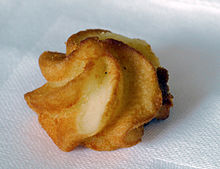 Duchess potatoes or Duchesse potatoes (French: pommes de terre duchesse) is a seasoned purée of mashed potato and egg. It is moulded by hand into various shapes or forced from a piping bag onto a baking sheet, or served as a topping on a dish.