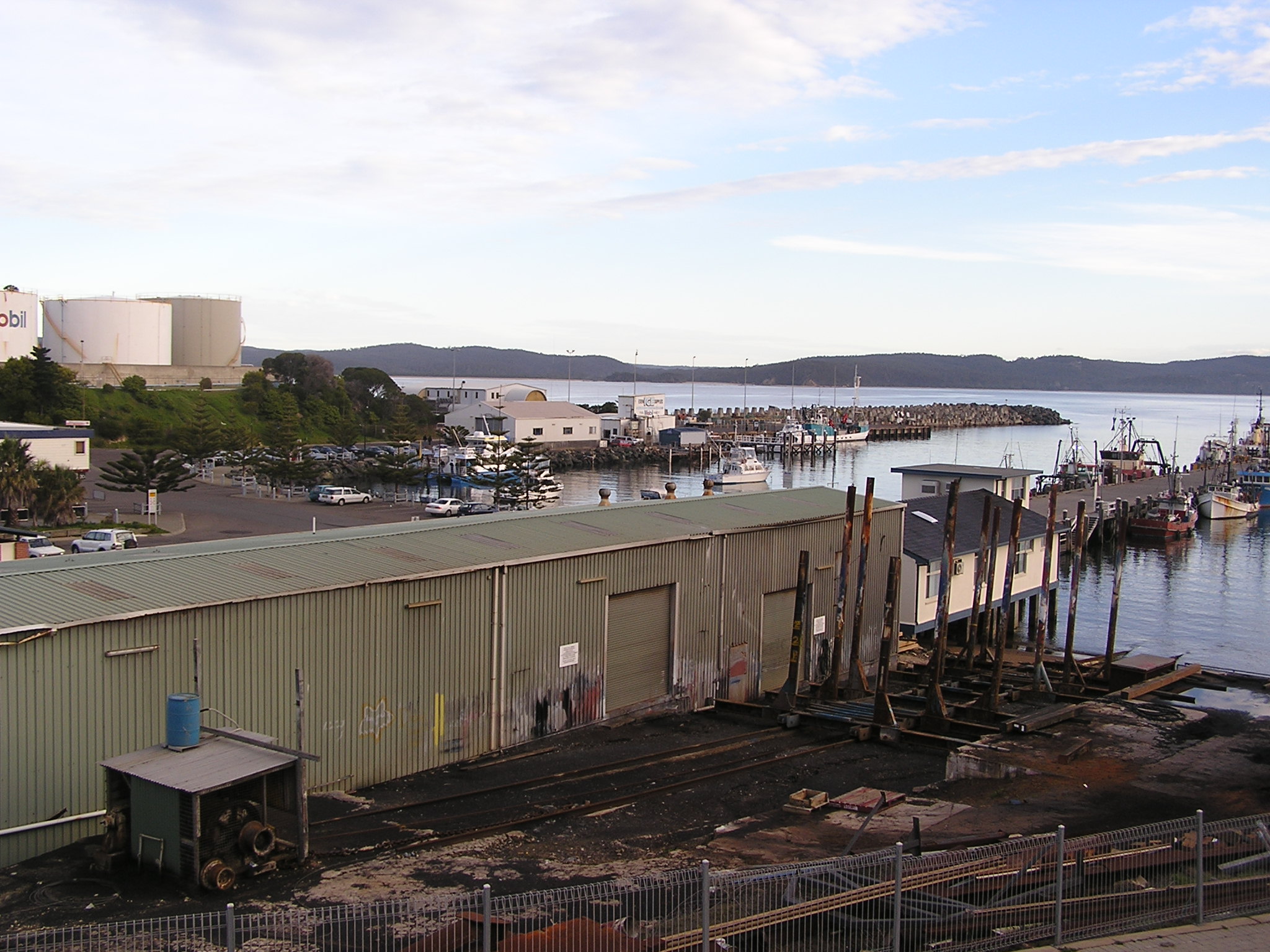 Eden is a town in the South Coast region of , . The town, convert|478|km|mi|0|lk=on south of the state capital Sydney near the border with Victoria, is located between Nullica Bay to the south and Calle Calle Bay, the northern reach of ,

The eastern coastline has rugged cliffs at the southern end and a wide, sandy surf beach, Aslings Beach, north of the cliffs. The beach ends at the entrance to Lake Curalo, a safe boating inlet of Twofold Bay. Although the urban settlement of Eden commenced in 1843 the settlement was not officially proclaimed as a township until 20 March 1885. [New South Wales Government Gazette - but need to cite year and volume for this to be a useful reference] The town’s main industries include fishing, forestry, and tourism.

ships had been operating in the area in 1791. first took shelter in Twofold bay on the return leg of a voyage to () in February, 1798, having noted the bay on the southward leg of this same voyage in December 1797. Later, in September of that year, on a subsequent voyage with , he and Flinders surveyed the bay for the first time.

The Australian botanist, Allan Cunningham, landed at Snug Cove in December 1817 so that he could collect botanical specimens from the district.

The first whaling station, for shore whaling, was established in the area by John Raine in 1828. Local Aboriginal people were employed in the whaling industry. In 1834 the Imlay brothers, Alexander, George and Peter, set up a whaling station at Snug Cove. Nearby they built a small slab and bark hut, the first-known building erected at Eden. Sketches of the hut were made by Sir Oswald Brierly in 1842 and by Captain Owen Stanley from H.M.S."Rattlesnake" in 1843.

The graziers from the Monaro district inland from Twofold Bay were seeking a better way to transport their cattle to , . It was decided to establish cattle-handling facilities and an accompanying township on an appropriate site on Twofold Bay. Thus, in 1834, the Home Government authorised the captain of HMS "Alligator" to seek an appropriate site for a settlement on Twofold Bay. ["The Australian" 3 June 1834] Early in 1835 the Governor of New South Wales, Governor , visited Twofold Bay and the site of the proposed new settlement on board H.M.S."Hyacinth". ["Australian" 13 February 1835, 13 March 1835]

Eventually the area for the proposed town, to be called Eden, was surveyed in 1842 by Mr Thomas Townsend, the Government Surveyor. The main street, Imlay Street, was named after the Imlay brothers who were early pioneers to the district. Other streets were named after Lieutenant Flinders, George Bass, Queen Victoria and her consort, Prince Albert. A wharf was built out into a cove, now named Cattle Bay, from a site on the western edge of Eden, where cattle could be grazed prior to their being loaded onto the ships. Cattle were also grazed on Lookout Point until 1853, then this land was subdivided for housing.

Eden was named after , the British Secretary for the Colonies, Baron Auckland, whose family name was Eden. After the town plan was finalised the first blocks were auctioned on the 9th March, 1843. The land was sold to Thomas Aspinall, Benjamin Boyd, S. Clinton, Lewes Gordon, W. Hirst, James Kirwan, J.P. Robinson and T.A. Townsend.

Eden grew in the 1850s following the decline of nearby , and the discovery of in Kiandra, which led to the 1859-1860 gold rush. For a few hectic months hundreds of gold seekers landed at Eden, replenished their supplies then headed for Kiandra. With the winter snow falls at Kiandra came the hurried exodus of those same people keen to leave the district as soon as possible. For a short period Eden flourished, only to quickly return to its usual quiet pace again.

In the 1850s there were four hotels in Eden. One of these hotels, the "Crown and Anchor", still stands. It is no longer licenced but it still provides accommodation to travellers. Just south of this building is another built in 1850 as a commercial premises. Various businesses occupied the site. The building is now used as a private dwelling. The first government school started in 1857. The school attached to St Joseph's Roman Catholic church commenced in 1888. There were also several private tutors in Eden.

Because Eden is between and both and , the port town was considered as a location for the Australian capital following Australian Federation in 1901.Fact|date=April 2008 However, the ‘Limestone Plains’ in Southern New South Wales were chosen instead as the location of the new city of .

The town of Eden lies within the Shire Council local government area. It is within the federal electorate of Eden-Monaro, which has for a long time been a key marginal seat, resulting in significant focus by the media and political parties during election campaigns. It is represented in the by the electorate of Monaro.

Horse-racing commenced in Eden in the mid 1850's and continued until the mid 1920's. The racecourse was located on the northern bank of Lake Curalo. A number of industries are based in the town in the mid 2000's. These are mainly related to the tourist industry and include a wide variety of accommodation, places to eat and entertainment, especially fishing and sailing. As well, cruises of Twofold Bay and for whale-watching leave the Eden Wharf located in Snug Cove. The cruise of Nullica Bay, Twofold Bay, allows close views of the two major wharves mentioned in the article on Twofold Bay. Tourism contributes $180 million s yearly to the economy of the shire – which includes Bega and several other towns. The area receives 550,000 visitors annually. Many people visit Eden for as whales migrate from to tropical waters in June and July, and back again later in the year.

A significant fishing fleet is based in the harbour (Snug Cove). A cannery opened in the town in 1949. It was closed in 1999, at the cost of many jobs. Saw-milling of timber has also been an important local industry for most of the life of the town. For over one hundred years the collection and export of wattle-bark was also a major local industry.

played a very important role in the town’s economy for over 100 years before its decline in the area in the 1920s and its end in 1930. Eden’s ‘Killer Whale Museum’ informs visitors of the history of whaling in the area and the role of s (killer whales) in herding whales into the harbour and helping whalers kill them. The whalers rewarded the orcas by allowing them to eat the lips and tongues of the dead whales.

The Port of Eden is one of two regional ports in administered by the , the other is at Yamba on the North Coast. The Port of Eden is the largest fishing port in . The major export handled by the port is woodchips. The port is shared with the Department of Defence who have constructed a large wharf for the servicing of their warships. The port also handles cruise ships. [cite web | year = 2006 | url = http://www.eden.nsw.gov.au/ | title = Port of Eden | work = New South Wales Regional Ports | publisher = | accessdate = 2006-12-14]

* - The leader of a pack of s who helped whalers in the port of Eden to capture in return for the whales lips and tongues as food. Old Tom's skeleton is on display in Eden's Killer Whale Museum, and it is the only complete killer whale skeleton on display in the southern hemisphere.
*
*The local team is the FC.