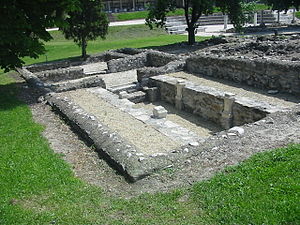 The mithraeum from the south

The Aquincum Mithraeum (of Victorinus) is a temple to the Roman god Mithras near Budapest in Hungary. The temple (known as a mithraeum) was built within a townhouse in the Roman city of Aquincum, on the outskirts of the modern city of Budapest, Hungary.

The temple was discovered during excavations in 1888 within what appeared to be a large house near to the centre of the Roman city. Due to the size of the house and the importance of its location it must have belonged to an important individual and this must certainly be the decurion Marcus Antonius Victorinus who dedicated a number of small altars within the sanctuary. The shrine was orientated north to south and measured 7m wide by 15.03m long. The interior was divided up into three parts- two ante rooms and the sanctuary proper. The front room (Room A: 4.75 x 2.90m)is postulated by the excavators as a Shrine of Mercury.[1] A room (Room B: 0.85x2.90m) was located on the west side and is of uncertain purpose. The middle room (Room C: 5.90x3m) probably served as a narthex. The main part of the shrine was divided into three lateral parts, typical of all mithraea. A central nave about 2.18m wide and 1 meter below ground level was flanked on either side by podium benches for the initiates to recline on during the ceremonies (see Mithraic worship). Steps lead down to the lower floor level of the nave directly from the entrance and the higher benches were accessed by single steps on either side of the bottom nave step. Along the front of the benches, and slightly recessed into them, were placed a pair of small altars (H 0.65 Br. 0.30m) all dedicated by Marcus Antoninus Victorinus.

To Cautes (see Cautes and Cautopates). Marcus Antonius Victorinus, Decurion of the colony of Aquincum. Aedile.

To the lasting spring. Marcus Antonius Victorinus, Decurion of the colony of Aquincum. Aedile.

The shrine is fully accessible within the Aquincum Archaeological Park, just south of the Aquincum Museum building. The remains have been heavily restored and consolidated for display. The tauroctony fragment and the altar are located in the eastern wing of the Lapidarium situated at the northern edge of the Archaeological Park. The Victorinus altars are the originals in situ.