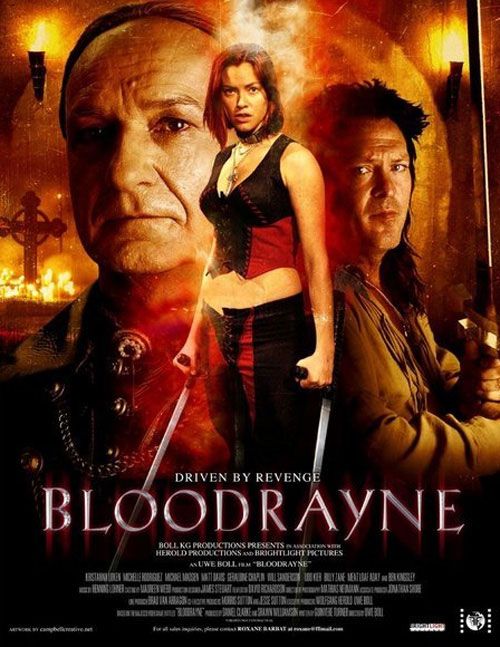 
with
and
producer = Dan Clarke,
,

"BloodRayne" is a 2006 horror/ based on the eponymous from Majesco and the game developer, Terminal Reality, directed by . The film stars , , , , and .

The film was the third video game movie adaptation by Uwe Boll who previously made the movies based on "House of the Dead" and "Alone in the Dark".

Based on the video game of the same name, the film centers on the character of Rayne (), an unholy breed of human and vampire called a . Dhampir are unaffected by crucifixes and do not thirst for human blood. She is the daughter of the Vampire King Kagan () who has gathered an army of thralls, both vampire and human, in order to annihilate the human race. She was conceived when Kagan raped her mother, and she later witnessed him killing her.

Sebastian (), Vladimir (), and Katarin () are three members of the Brimstone Society, which fights vampires. When they hear of the Dhampir, Vladimir plans to recruit her in order to kill Kagan. A great portion of the story concerns the three body-parts of an ancient vampire that can make a vampire free of the basic weaknesses: all water (the eye), the cross (the rib), and the sun (the heart). As Kagan wants all these parts, it becomes the heroes' mission to stop him.

On , , the film opened in 985 theaters across the US. It was originally to have played at up to 2,500 theaters, but that number dropped to 1,600 and ended up lower due to prints being shipped to theaters that had not licensed the film. [ [http://www.hollywoodreporter.com/thr/article_display.jsp?vnu_content_id=1001807661 "Hostel" scares up $19.6 mil to reach No. 1 ] ] [ [http://www.filmjerk.com/new/article1576.html FilmJerk.com - News - Romar Releasing Faces Minor Bumps Upon First Major Release ] ] In its opening, the film only made $1,550,000 USD. [ [http://boxofficemojo.com/movies/?id=bloodrayne.htm "BloodRayne" (2006) ] ] "BloodRayne" has received poor reviews on with a freshness of only 4%. The film ended up grossing $3,591,980 USD (June 2006). [ [http://boxofficemojo.com/movies/?id=bloodrayne.htm "BloodRayne" (2006) ] ] The movie was criticized for not having much of a story, and for hiring prostitutes to reduce production costs. [ [http://www.ugo.com/channels/filmtv/features/bloodrayne/default.asp UGO.com Film/TV - Uwe Boll Interview - "BloodRayne" ] ]

"Bloodrayne" did go to , but was only shown a few times before going to the within a few months.

, who was the voice of Rayne in the BloodRayne games, was asked at her panel at Anime Boston 2007 what her thoughts were on the BloodRayne movie and said "Oh God, that movie sucked. And that movie was so bad. I saw it on The Movie Channel and I couldn't even get through 20 minutes of it! It was so bad and it was kinda sad that they took that because I really liked the games." [http://www.youtube.com/watch?v=SKevjLdhCEs&feature=related]