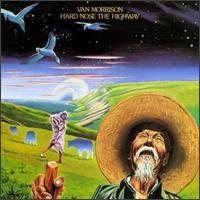 "Hard Nose the Highway" is an album by Northern Irish that was released in 1973. The album contains the U.S. Top Forty hit single "" that has also become a fan favourite. [Hinton. Celtic Crossroads. p.149]

It is his first solo album to contain songs not written by Morrison. A of the song "", usually associated with is included, and a take of the traditional song "Purple Heather".

In January 2009, Exile/ will release this album as part of Series four of four catalogue reissues of Morrison's albums dated from 1971 through 2002.

Recorded during a series of prolific recording sessions, there was more than enough material to fill a double-album. Morrison proposed the idea to , but he was ultimately convinced to release a single LP. A few leftover tracks were saved or re-recorded for future albums like "", but most would not see release until 1998's compilation of outtakes, "The Philosopher's Stone".By Morrison's own account, this was the first album that was completely produced under his complete control. The recording sessions even took place in a recording studio he had built next door to his home in . He remarked on the album: "As a concept for the album, I was just trying to establish how hard it was to do what I do. Plus there were some lighter things on the other side of it. One side has a kind of hard feeling while the other is soft." [Yorke, Into the Music, p.99]

"Snow in San Anselmo" is the opening song and features the backing vocals of the Oakland Symphony Chamber Chorus. Morrison says the song is, "just a sketch on when it snowed in . It's about the images that were happening when it was snowing there for the first time in thirty years." "" was released as a successful single and was also a favorite concert performance in the 70s. It featured the catchy line, "and it's ever present everywhere, Warm Love." The title song, "Hard Nose the Highway" is explained by Morrison as: "the theme running through the whole song is 'Seen some hard times' which I have 'Drawn some fine lines' which I definitely have, and 'No time for shoe shines' when you're trying to make a living." "Wild Children" is actually about the post-war children growing up in other countries and getting their images — from American anti-heroes such as those portrayed by , , and . "The Great Deception" is according to biographer, Richie Yorke: "One of the most stinging indictments from any observer, let alone a rock artist, of the tragic hypocrisy of so many participants in the sub-culture, in particular the big-time rock stars of this era." "Being Green" is the first non-original composition Morrison had included on any album for Warner Bros. so far and was taken from the popular American children's TV show, , which he must have watched with his young daughter, Shana. He says about his interpretation of the song, "That was just a statement that you don't have to be flamboyant. If somebody doesn't like you just because you're a certain thing, then maybe they're seeing the wrong thing." A reviewer said about the ten and a half minute "Autumn Song": "I can't deny that it's the funkiest song about the splendors and moods of fall that has ever glided through my ears." The ending song, "Purple Heather" is the traditional "" written by F. McPeake as a variant of 's "The Braes of Balquidder", and re-arranged by Morrison. [Yorke, Into the Music, pp. 99-110]

Stephen Holden in his review said: "Again, Van demonstrates his ability to fuse jazz, pop and rock ideas into a fluid format whose stylistic identity ends up being his and his alone." [cite web|url=http://www.rollingstone.com/artists/vanmorrison/albums/album/115555/review/5943915/hard_nose_the_highway|title=Hard Nose the Highway review|publisher=rollingstone.com|accessdate=2008-08-08]

All songs written by , unless otherwise noted.