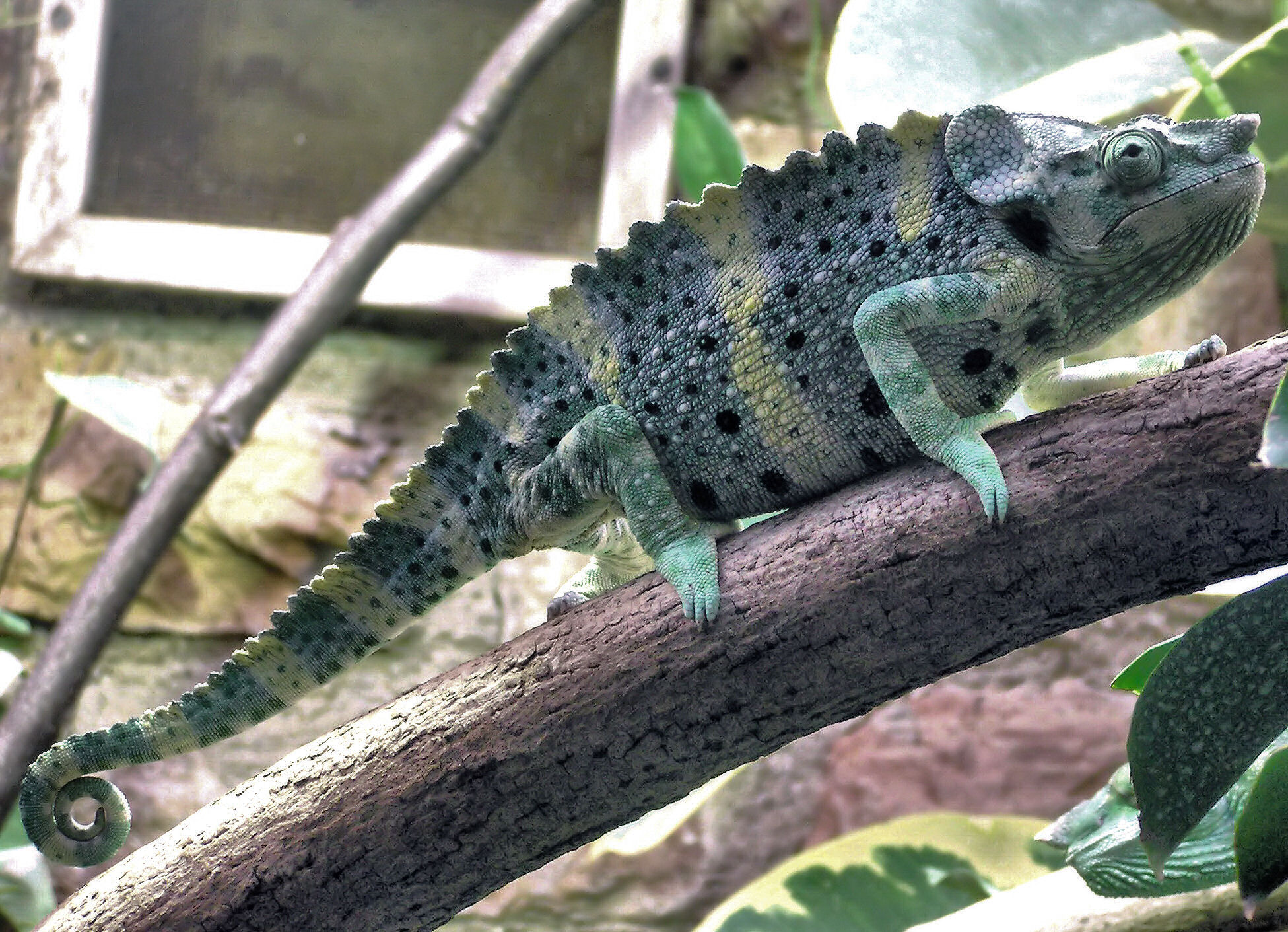 "Chamaeleo melleri", s Meller's Chameleon (German: "Mellerchamäleon"), Giant One-horned Chameleon, and "Elefantenohrchamäleon" (German for "Elephant Ear Chameleon") is the largest of from the n (i.e. the largest of the chameleons not native to ).

"C. melleri" is relatively common in the y s and interior s of and may be found in , northern , and .

The largest of the African Chamaeleonidae, "C. melleri" averages 21 inches (50 cm) in length but exceptionally large specimens of Meller's Chameleons have reached over convert|30|in|cm in length and have weighed convert|21|oz|g|-2|abbr=on|lk=on.

In addition to being slightly smaller, female Meller's Chameleons medial crest anterior to the eyes is smaller.

"C. melleri" is stout-bodied and has a relatively stubby tail one one third the length of its body. A low, scalloped crest extends from just behind the casque of the head through the proximal half of the tail. It has heterogeneous scales which vary shape and size to various parts of its body and large, granular scales distributed homogeneously on the trunk and limbs. There are longitudinal rows of large, granular scales in the chameleon's gular region, one of its most distinctive characteristics.

Spots and broad vertical bands on the chameleon's flanks range in color from brown, dark green, yellow or even black. The basic coloration of the creature is a deep with white stripes but like all chameleons its changes color depending on various circumstances. If being fed or handled they might show display black and white dots all over. When basking in the sun, the side of their body towards the sunlight can turn dark green or black white the rest of the animal stays much lighter.

They also have color patterns associated with stress. Mild excitement or stress is indicated by dark spotting overlaying the reptile's normal color. These dark green spots turn to black mottling as the chameleon gets more upset. Severe stress turns the chameleon first charcoal gray, then pure white adorned with yellow stripes. A sick Meller's Chameleon may be mottled with brown, gray, pink, or white. A gravid animal is black, cream, and gray colored and will also be bulging with eggs.

Male Meller's Chameleons, and to a lesser extent females as well, are extremely territorial and highly aggressive toward others of their species. Their long tongues can reach prey up to convert|20|in|cm away.

Like most chameleons, Meller's are strict eating insects, smaller lizards, spiders, worms, and caterpillars. Large specimens have been known to eat small birds.

Females annually produce a single clutch of up to 60 s.

As they are large lizards, a large enclosure is recommended. One breeder recommends placing the chameleon's cage above human eye level so that it can feel elevated in its environment.

High day time temperatures (80-85°F or 27-29°C) are needed for the 's enclosure. Simulating the natural temperature changes of the creature's native environment, a night time temperature of the low 60s Fahrenheit (~16°C) is recommended as well. They also need considerable hydration and various s are recommended.