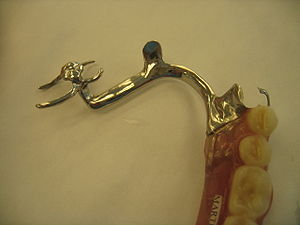 Occlusal view of a mandibular partial denture. All seven parts of an RPD are visible on this example. 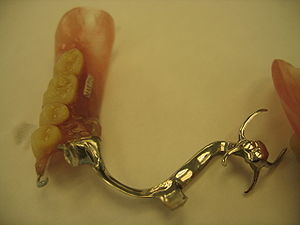 A removable partial denture (RPD) is for a partially edentulous dental patient who desires to have replacement teeth for functional or aesthetic reasons, and who cannot have a bridge (a fixed partial denture) for any number of reasons, such as a lack of required teeth to serve as support for a bridge (i.e. distal abutments) or due to financial limitations.

The reason why this type of prosthesis is referred to as a removable partial denture is because patients can remove and reinsert them when required without professional help. Conversely, a "fixed" prosthesis can and should be removed only by a dental professional.

Depending on where in the mouth teeth are missing, edentulous situations can be grouped under four different categories, as defined by Dr. Edward Kennedy in his classification of partially edentulous arches.

Kennedy Class I RPDs are fabricated for people who are missing some or all of their posterior teeth on both sides (left and right) in a single arch (either mandibular or maxillary), and there are no teeth posterior to the edentulous area. In other words, Class I RPDs clasp onto teeth that are more towards the front of the mouth, while replacing the missing posterior teeth on both sides with false denture teeth. The denture teeth are composed of either plastic or porcelain.

Class II RPDs are fabricated for people who are missing some or all of their posterior teeth on one side (left or right) in a single arch, and there are no teeth behind the edentulous area. Thus, Class II RPDs clasp onto teeth that are more towards the front of the mouth, as well as on teeth that are more towards the back of the mouth of the side on which teeth are not missing, while replacing the missing more-back-of-the-mouth teeth on one side with false denture teeth.

Class III RPDs are fabricated for people who are missing some teeth such that the edentulous area has teeth remaining both posterior and anterior to it. Unlike Class I and Class II RPDs which are both tooth-and-tissue-borne (meaning they both clasp onto teeth, as well as rest on the posterior edentulous area for support), Class III RPDs are strictly tooth-borne, which means they only clasp onto teeth and do not need to rest on the tissue for added support. This makes Class III RPDs exceedingly more secure as per the three rules of removable prostheses that will be mentioned later, namely: support, stability and retention. (See the article on dentures for a more thorough review of these three fundamentals of removable prosthodontics.)

However, if the edentulous area described in the previous paragraph crosses the anterior midline (that is, at least both central incisors are missing), the RPD is classified as a Class IV RPD. By definition, a Kennedy Class IV RPD design will possess only one edentulous area.

Class I, II and III RPDs that have multiple edentulous areas in which replacement teeth are being placed are further classified with modification states that were defined by Oliver C. Applegate. Kennedy classification is governed by the most posterior edentulous area that is being restored. Thus, if, for example, a maxillary arch is missing teeth #1, 3, 7-10 and 16, the RPD would be Kennedy Class III mod 1. It would not be Class I, because missing third molars are generally not restored in an RPD (although if they were, the classification would indeed be Class I), and it would not be Class IV, because modification spaces are not allowed for Kennedy Class IV.

Components of an RPD

Rather than lying entirely on the edentulous ridge like complete dentures, removable partial dentures possess clasps of metal or plastic that "clip" onto the remaining teeth, making the RPD more stable and retentive.

The parts of an RPD can be listed as follows (and are exemplified by the picture above):

Both cast circumferential and wrought wire clasps are suprabulge clasps, in that they engage an undercut on the tooth by originating coronal to the height of contour, while Roach clasps are infrabulge clasps and engage undercuts by approaching from the gingival.

In addition there are a couple of specific theories which include the clasp design: