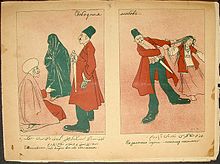 Forced marriage is a term used to describe a marriage in which one or both of the parties is married without his or her consent or against his or her will. A forced marriage differs from an arranged marriage, in which both parties consent to the assistance of their parents or a third party (such as a matchmaker) in identifying a spouse, although the difference between the two may be indistinct. The practice of forced marriage was quite common amongst the upper classes in Europe until the 20th century, and is still practiced in parts of South Asia, East Asia, the Middle East, and Africa. Forced marriages now in Western Europe and North America are generally committed within communities of immigrants from such areas. In most but not all forced marriages, it is the female (rather than the male) who is the involuntary spouse.[citation needed]

The United Nations views forced marriage as a form of human rights abuse, since it violates the principle of the freedom and autonomy of individuals. The Roman Catholic Church deems forced marriage grounds for granting an annulment — for a marriage to be valid both parties must give their consent freely.

In response to the problem of forced marriages among immigrants in the UK, the Forced Marriage (Civil Protection) Act 2007 was passed, which enables the victims of forced marriage to apply for court orders for their protection.

Historically, forced marriage was used to require a captive (slave or prisoner of war) to integrate with the host community, and accept his or her fate. One example is the English blacksmith John R. Jewitt, who spent 3 years as a captive of the Nootka people on the Pacific Northwest Coast in 1802-1805. He was ordered to marry, because the council of chiefs thought that a wife and family would reconcile him to staying with his captors for life. Jewitt was given a choice between forced marriage for himself and capital punishment for both him and his "father" (a fellow captive). "Reduced to this sad extremity, with death on the one side, and matrimony on the other, I thought proper to choose what appeared to me the least of the two evils" (p154)[1]

A shotgun wedding is a form of forced marriage occasioned by an unplanned pregnancy. Some religions and cultures consider it a moral imperative to marry in such a situation, based on reasoning that premarital sex or out-of-wedlock births are sinful, sanctioned by law, or otherwise stigmatized.[2] The phrase is an American colloquialism, though it is also used in other parts of the world.

It is based on a hyperbolic scenario in which the pregnant female's father resorts to coercion (such as threatening with a shotgun) to ensure that the male partner who caused the female's pregnancy goes through with it, sometimes even following the man to the altar to prevent his escape. The use of violent coercion to marry is no longer legal in the United States, although many anecdotal stories and folk songs record instances of such intimidation in the 18th and 19th centuries. Purposes of the wedding include recourse from the male for the act of impregnation and to ensure that the child is raised by both parents as well as to ensure that the woman has material means of support. In some cases, a major objective was the restoring of social honor to the mother.

Shotgun weddings have become less common as the stigma associated with out-of-wedlock births has gradually faded and the number of such births has increased; the increasing availability of birth control and abortion, as well as material support to unwed mothers such as welfare has also reduced the perceived need for such measures.

In Japan, the slang term 出来ちゃった結婚 Dekichatta kekkon (a marriage necessitated by an unplanned pregnancy) emerged in the late 1990s with a very similar meaning, although the etymology of the term in Japanese does not imply the same threat of physical violence that the English idiom "shotgun marriage" does. The term dekichatta kekkon can be loosely translated as an "oops marriage" or an "it's-already-happened-marriage". Namie Amuro is credited with beginning a trend of marrying and having children fairly young, at ages 19 or 20. The practice continued to be highly publicized and occurred throughout the late 1990s and first decade of the 21st century. Notable celebrities with shotgun marriages include Nozomi Tsuji and Anna Tsuchiya. Additionally, there is a trend of shotgun marriages among older Japanese for a variety of reasons, including: lack of motivation, limited education received, and socio-economical factors. Older examples include Leah Dizon and Miyavi.[3][4]

In China, the term 奉子成婚 (Pinyin: Fèngzǐchénghūn) (literally, "Married by the child") means that the couple married because the woman conceived the child of the man outside of marriage. Similar to American shotgun marriages in parental pressure for the pair to marry, it is becoming increasingly popular for China's youngest generation. However, in the same age group, there is also objection and criticism to such a practice.[5][6]

Compensation marriage, known variously as vanni, swara and sang chatti, is the traditional practice of forced marriage of women and young girls in order to resolve tribal feuds in parts of Pakistan and Afghanistan. Although illegal in Pakistan, it is still widely practiced in Pakistan's Khyber-Pakhtunkhwa province.

In pop culture and academia

The British movie East Is East shows the practice of forced marriages: A Pakistani father (married to a British woman) forces his oldest son into marriage and, after the son's escape, tries to do the same to the two next eldest sons.

Addressed by the U.K.

Gita Sahgal, the writer and journalist, film director, and human rights activist was the producer in 2002 of "Tying the Knot". The film was commissioned by the U.K.'s Foreign and Commonwealth Office's Community Liaison Unit, which was set up to handle the problem of British victims of forced marriage who have been, or may be, taken abroad to marry against their will. The educational video on marriage and freedom of choice was produced for use in schools, youth groups, and other organisations working with young people, examines marriage across various cultures, and was designed to promote discussion on the issues it raises.[7]

Forced marriages can be made because of family pride, the wishes of the parents, or social obligation. For example, according to Ruqaiyyah Waris Maqsood, many forced marriages in Britain within the British Pakistani community are aimed at providing British citizenship to a member of the family currently in Pakistan to whom the instigator of the forced marriage feels a sense of duty.[8]