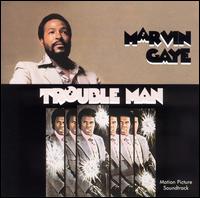 "Trouble Man" is a by soul singer , released , on Motown-subsidary label Tamla Records. As the soundtrack to the 1972 of the same name, the "Trouble Man" soundtrack was a more contemporary move for Gaye, following his landmark politically-charged album "".

Fresh off the left-field base success of his classic 1971 album, "", Gaye was intrigued by . Gaye had acted in two films, including "The Ballad of Andy Crocker" and "Chrome and Hot Leather". The singer moved to in after he accepted the offer to do a soundtrack album.

Like and , Gaye took to recording a soundtrack for a film. "", a thriller based in the ghetto, was made solely for the soundtrack Gaye composed and produced himself. Unlike "" and "Shaft", the soundtrack to "Trouble Man" doesn't feature songs; except for a few vocal jabs by Gaye, it is made up entirely of instrumental pieces. The title track was released in several different mixes. The song was also Gaye's venture into a more influenced sound missing from his previous work. According to Gaye, the song was autobiographical to his nature. The vocal version became another big hit for Gaye, reaching #7 on the Billboard Pop Singles Chart in 1973. The song was later covered by long-time Gaye admirer and artist, . Critics deemed "Trouble Man" on par with Hayes and Mayfield's albums. Gaye was soon followed by other contemporaries including James Brown ("Black Caesar"), (""; "Foxy Brown") and ("The Together Brothers").